The Wall Street Journal noted in 2011: 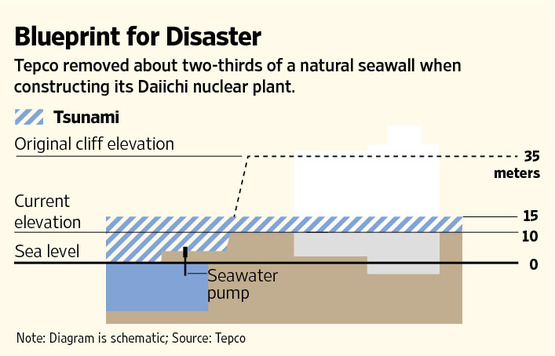 When Tokyo Electric Power Co. broke ground on the now defunct Fukushima Daiichi nuclear-power station 44 years ago, the utility made a fateful construction decision that raised the plant’s vulnerability to the tsunami that ultimately crippled its reactors.

In 1967, Tepco chopped 25 meters off the 35-meter natural seawall where the reactors were to be located, according to documents filed at the time with Japanese authorities. That little-noticed action was taken to make it easier to ferry equipment to the site and pump seawater to the reactors. It was also seen as an efficient way to build the complex atop the solid base of bedrock needed to better protect the plant from earthquakes.

But the razing of the cliff also placed the reactors five meters below the level of 14- to 15-meter tsunami hitting the plant March 11, triggering a major nuclear disaster resulting in the meltdown of three reactor cores.

At the time, a 35-meter seaside cliff running the length of the property was a prominent feature of the site.

But Tepco outlined its intention to clear away about two-thirds of the bluff in its official request for permission from the government to build its first nuclear plant, according to a copy of the application reviewed by The Wall Street Journal.

“While the tsunami countermeasures at Fukushima Daiichi were considered sufficient when the plant was constructed, the fact that those defenses were overwhelmed is something that we take very seriously,” said Kouichi Shiraga, a public-affairs official at Japan’s Nuclear and Industrial Safety Agency.

The destruction of that natural tsunami barrier at the Fukushima Daiichi site contrasts starkly with later decisions in the 1970s to build the nearby Fukushima Daini and Onagawa nuclear-power plants at higher elevations. Despite being rocked by the massive March earthquake, both of those plants’ reactors achieved “cold shutdowns” shortly after the tsunami struck and thereby avoided the damage wreaked upon the crippled Daiichi plant.

Both of those plants, located along the same coastline as Daiichi, survived primarily because they were built at higher elevations, on top of floodwalls that came with the landscape. As a result, the tsunami didn’t result in an extended loss of power at those plants, allowing their operators to quickly cool active reactors and avoid meltdowns.

Tepco’s 1966 application for permission to start construction at Daiichi … did review tsunami history in a three-page list of seismic activity dating from 1273. In that chart, Tepco does reference a tsunami of unspecified height that struck the immediate area of Daiichi in 1677. It destroyed 1,000 homes and killed 300 people.

The application cites typhoons as the bigger threat, noting an 8-meter-tall wave generated in 1960. “Most large waves in this coastal area are the product of strong winds and low pressure weather patterns, such as Typhoon No. 28 in February of 1960, which produced peak waves measured at 7.94 meters,” it stated.

A former senior Tepco executive involved in the decision-making says there were two main reasons for removing the cliff. First, a lower escarpment made it easier to deliver heavy equipment used in the plant, such as the reactor vessels, turbines and diesel generators, all of which were transported to the site by sea. Second, the design of the plant required seawater to keep the reactor cool, which was facilitated by a shorter distance to the ocean.

“It would have been a very difficult and major engineering task to lift all that equipment up over the cliff,” says Masatoshi Toyota, 88 years old, the former top Tepco executive who helped oversee the building of the reactors at Fukushima Daiichi. “For similar reasons, we figured it would have been a major endeavor to pump up seawater from a plateau 35 meters above sea level,” he said in a telephone interview.

“Of course there is no record of big tsunami damage there because there was a high cliff at the very same spot” to prevent it, said Mr. Oike, the seismologist on the investigation committee.

And Daiichi’s lower elevation contrasted with plants that were built in the following years along the same coast.

The Onagawa site, 60 miles north of Daiichi, was selected in large part because of its height beyond the reach of any recorded tsunami, according to a former executive at a Japanese manufacturer involved in the work.

Many Other Negligent Or Criminal Errors

Tepco has made many other negligent or criminal errors:

Letting Tepco remove the fuel rods is like letting a convicted murderer perform delicate brain surgery on a VIP.

Top scientists and government officials say that Tepco should be removed from all efforts to stabilize Fukushima. An international team of the smartest engineers and scientists should handle this difficult “surgery”.

Paul Gunter of Beyond Nuclear (who sent us the Wall Street Journal article) sums it up pretty well: