Markets have returned to the scene of the crime and participants act like nothing’s happened. After an 11 day rally propelling $ES futures nearly 11% off of the December lows happy days are here again. 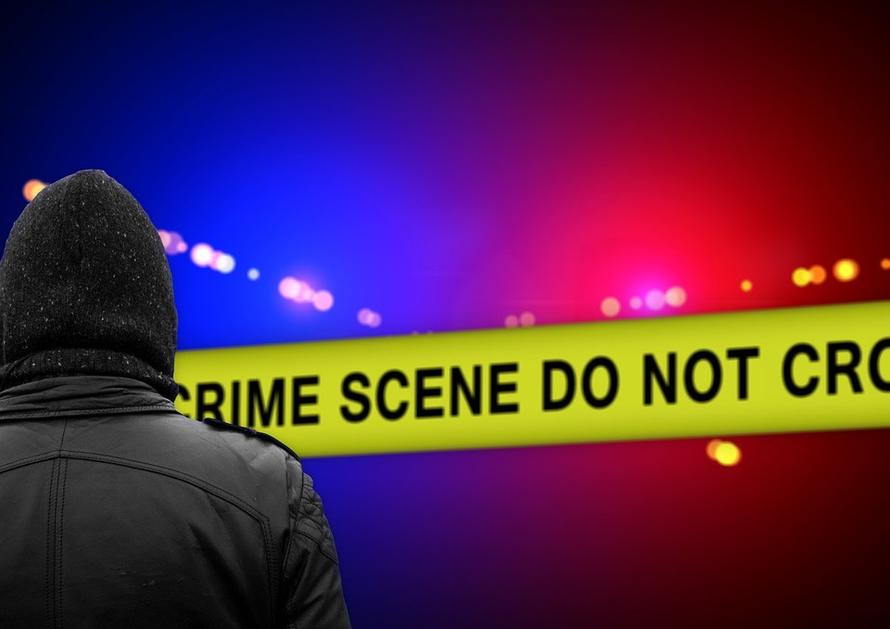 The lows are in, any retest will be bought, the Fed’s turned dovish, slashed earnings projections are the basis for future gains, get a China deal and there’s nothing but blue skies ahead. I put myself at the mercy of readers and correct me if I’m wrong, but this is generally the current consensus of analysts and pundits that did not see the Q4 2018 drubbing coming in the first place. And, to be fair, that is an acknowledged possibility I outlined myself in my 2019 Market Outlook.

And frankly I can’t blame them for taking this view, indeed, if you take a linear view of markets, then we’re just simply repeating the same script we’ve become accustomed to over the last 10 years. Markets tank and the systemic rescue patrol gets active at just the right time and the bull market trend gets saved again:

Treasury Secretary Mnuchin’s emergency calls just before the lows followed up by over a dozen dovish speeches and appearances by FOMC members on the heels of the now famous Powell cave on January 4th had an immediate and violent reaction in credit and stock markets.

No chart probably better highlights this point than that of high yield credit: 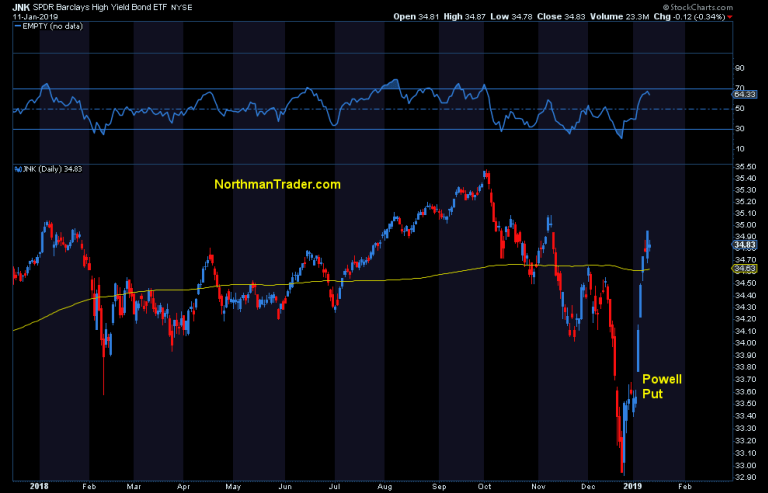 Whether words, and that’s all there has been so far, are enough remains to be seen. After all QT remains on schedule although the Fed’s rate hike schedule is over for now. Again. And right at this moment in time:

The observable fact remains: When markets drop hard the Fed reacts. Either in policy action or in words. And the Fed has reacted by pausing the rate hike schedule away from the advertised rate hike schedule for 2019. In short: They have altered policy by managing expectations. Again. Because that’s what you do when unemployment is below 4%, the economy is strong and there’s no risk of recession. Oh yes, that’s what Jerome Powell said this week again. Things are awesome, but let’s stop rate hikes and be flexible on the balance sheet. Please.

However, if you take a log view of markets, maybe things are not so awesome:

This is a view that suggests that this market is technically broken and that markets have topped and look to pursue a historical path with a recession and a larger bear market to emerge.

And this view is not only supported by the break of log trend lines, but also by the concurrent rejection of the 10 year yield at its multi decade trend line: 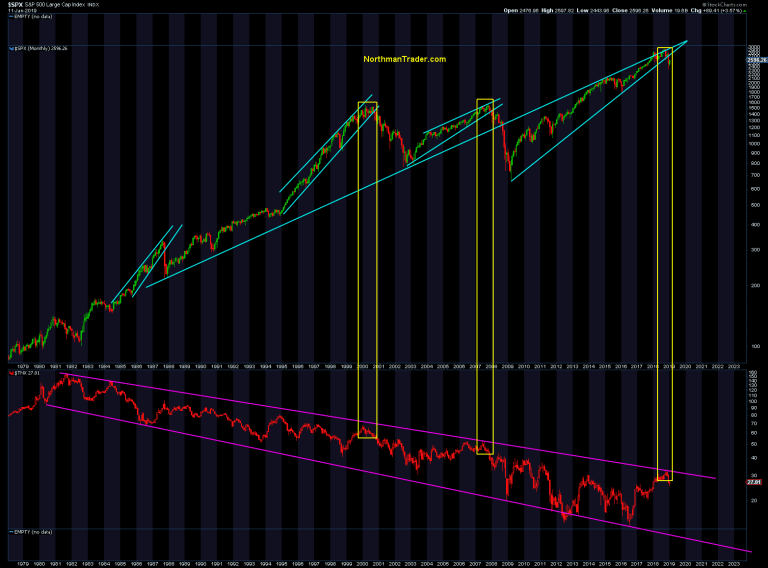 Let’s review the technical state of the recent rally.

In Dirty Rally I had outlined the case for a 10% rally to emerge around a near Christmas time bottom based on the 2000/2001 analog, but back then it took until the end of January from December 21. Now we had a 10% move from December 24th to January 10th.

In my previous Weekly Market Brief I outlined imbalances that demanded technical reconnects and I stated:

And here we are returning to the crime scene, the December breakdown zone, and are seeing reconnects with some key moving averages such as the 50MA. 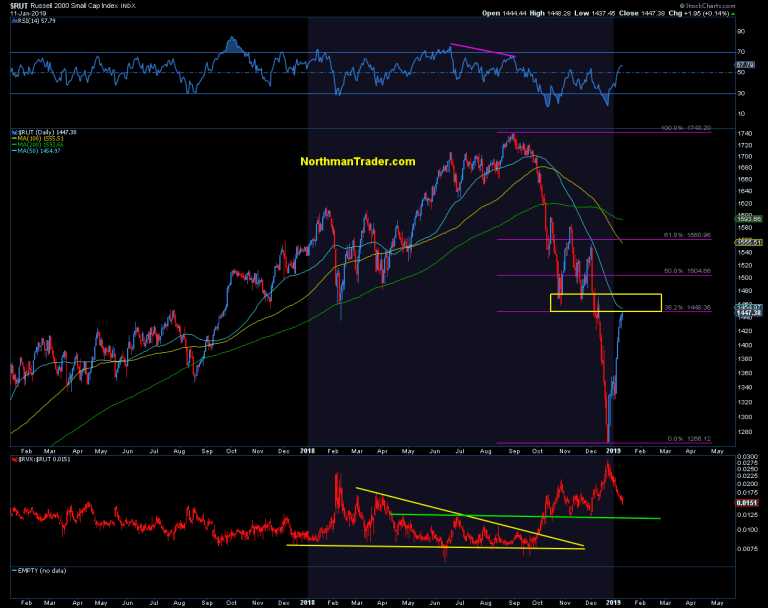 To reiterate, despite the speed of this move, NOTHING here so far is surprising. We moved into technical reconnects and there is room to connect higher still into MAs, gap fills, etc. And while we have some short term overbought readings, there’s nothing overbought on the 2 hour, daily, or weekly time frames. Indeed, many of these have plenty of room to run to the point where this move can go on for some time. Add a China deal and $SPX could be back tat the 2750-2800 zone in a flash.

What we just witnessed so far was a technical move higher alleviating some of the historic oversold conditions we saw in December: 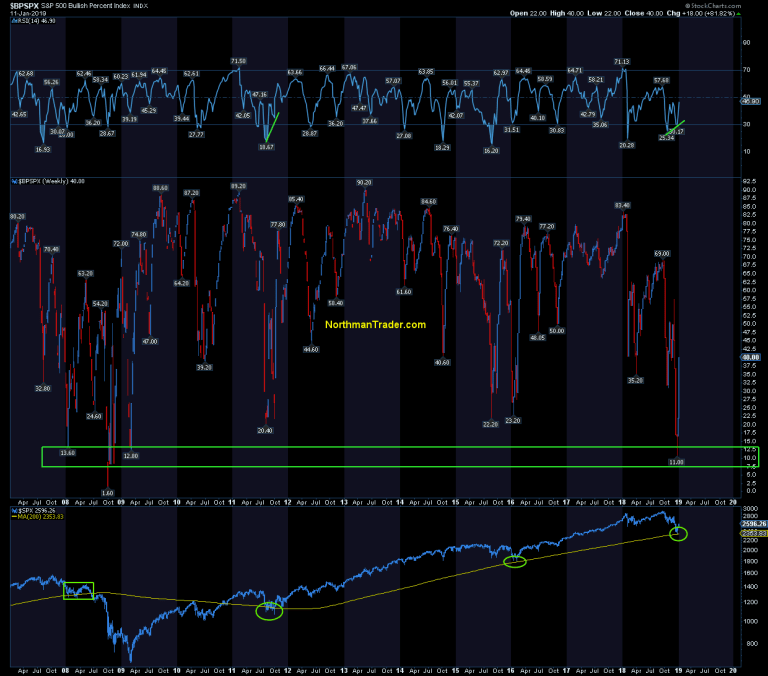 The influence of the Fed however has helped bring about another historic abnormality and I highlighted this in “Intrigue” the massive squeeze on the $NYMO. The oscillator closed the week at its 2nd highest weekly closing print ever: 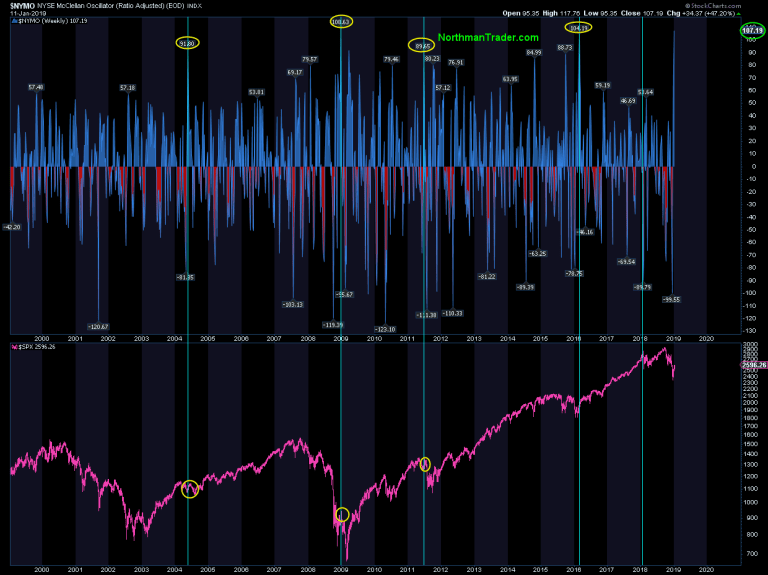 In 2016 we saw a similar read as central banks went into intervention overdrive and embarked on a $5.5 trillion+ intervention schedule in the 2 years that followed. There is no such expectation this time.

In 2008 we saw the highest $NYMO print ever right near the top of the counter rally before markets reverted to significant new lows.

And perhaps that’s the key question here: Is this current technical rally a counter rally that will produce new lows or have we seen a significant low in markets?

I remain open minded either way at this juncture as we still need confirming evidence. Over the next few weeks we will get some significant new information to evaluate. Earnings will come in full force next week. So far the earnings seasons has brought about plenty of warnings and downgrades which have been ignored by markets in context of this current rally.

Fact is markets have begun to enter a significant zone of resistance: 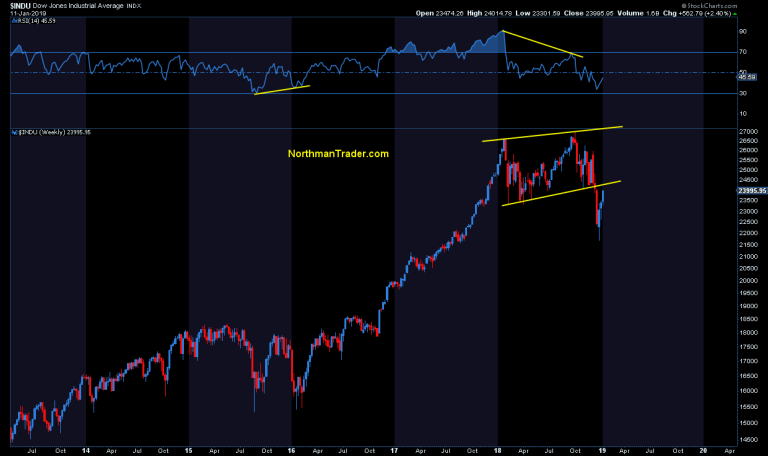 Key indices are approaching key MAs, trend lines, gap fills and previous support all of which are technical resistance.

It is what happens from there that will be key to determine whether the historical script plays out of whether the bull market can resume its regularly ordained path higher.

In fact, bears now have to prove their case and the only path forward for them is new lows. Not a retrace, not a retest with even temporary new lows, but sustained new lows.

And with the Fed now being easy on the rate hike front and a potential China deal still looming that is a challenging path.

After all one can envision all kinds of bullish scenarios.

For example, a technical retrace could potentially set up for a cup and handle pattern: 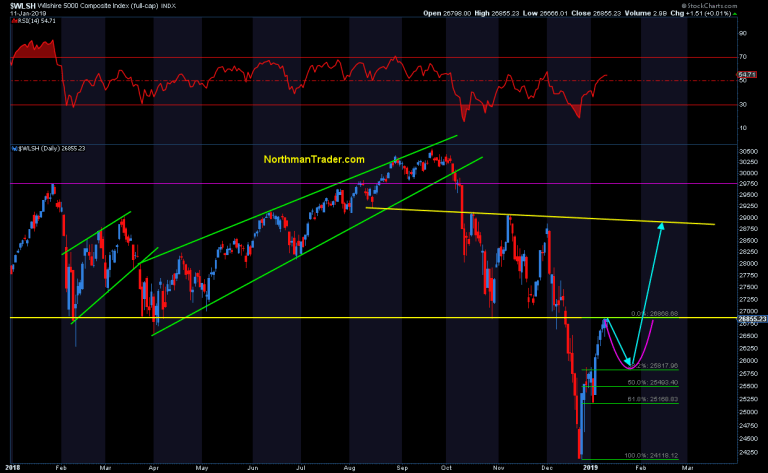 Or a retest with new lows could set up for a positive divergence and produce a formidable “W” bottom: 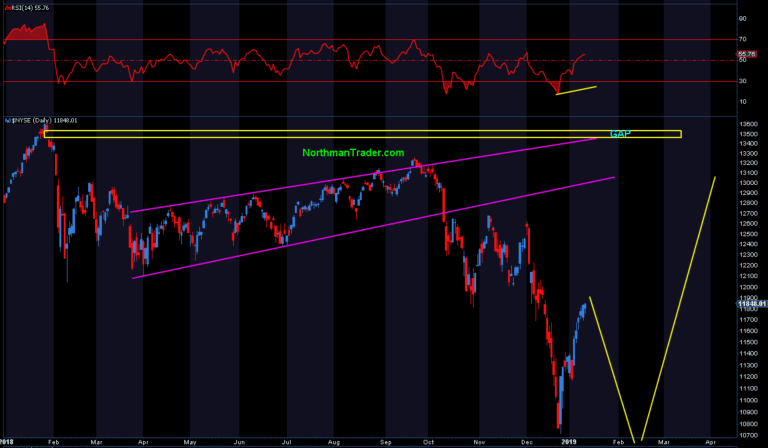 The message of all of these speculative examples offer the prospect of wide price ranges and plenty of opportunities for active participants.

I can even imagine us remaining within the larger 2018 price range and producing an inside year rendering all larger bullish and bearish debates unresolved.

Much will depend on the evolution of the larger macro picture. Germany and France just saw large reversals in their industrial production numbers raising well founded concerns that Europe is heading into a recession: 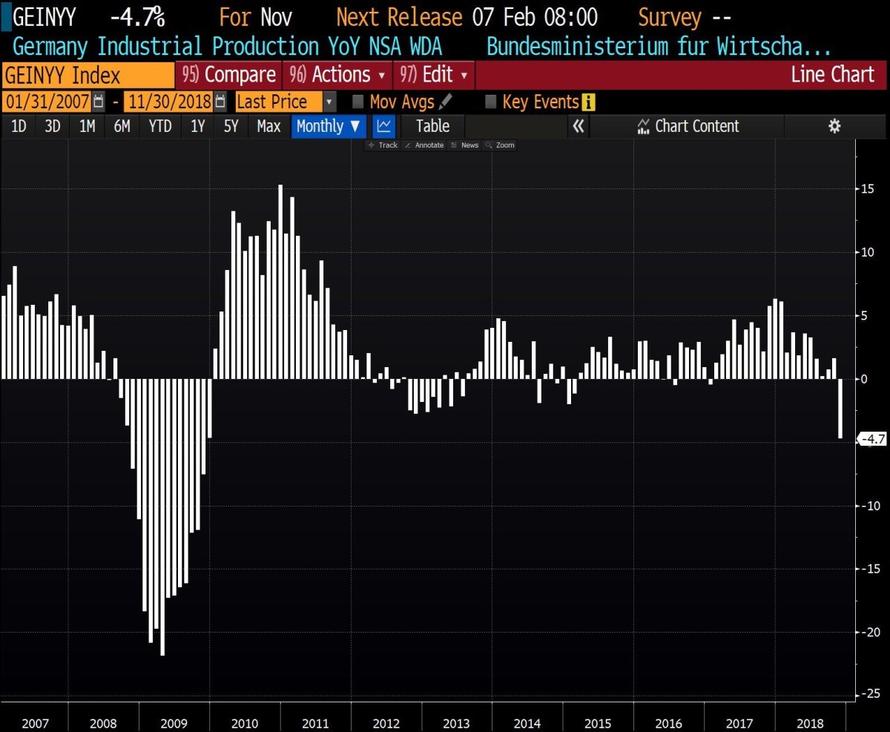 Retailers have just produced rather unimpressive earnings suggesting perhaps that the inventory builds of Q4 vastly overstated underlying GDP growth which in return could set up for a rather disappointing Q1 GDP print.

There is no China deal still, Brexit remains under a big cloud of uncertainty, the government remains shut down, deficit spending and government debt financing remains on a historic accelerated path and political drama and uncertainty appear to continue unabated. If the Fed had any confidence in the economic outlook they project they would not have paused their rate hike path and not felt it necessary to placate markets with dovish talk. Unless of course they saw the drop in equity prices  to be a direct threat to their economic outlook, which of course is the ugly truth they would never admit to.

While the rally has improved recent sentiment that in itself is not evidence of future market gains. Indeed in recent months it’s been the polar opposite: 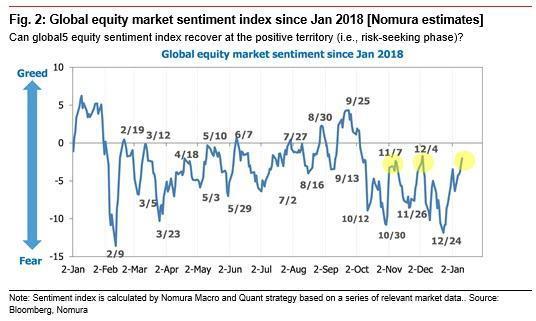 Remember: Violent rallies are the hallmark of emerging bear markets and so far all we’ve seen is technical reconnects returning to scene of the crime. As much as bears may have to prove so do bulls and it’s still very early into the year.

Fact is major technical damage has been inflicted on markets in 2018. We remain in a structure of lower highs and lower lows on the macro front and one could even imagine a larger structure that leaves room for lower prices to come in the months ahead: 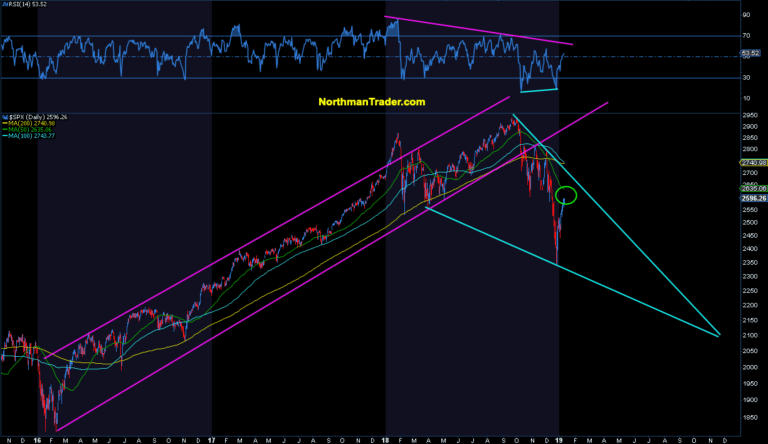 And if a bear market is to unfold and the Fed’s jawboning fails then participants may come to realize that the lows are not in, rather we’re just at the first inning of the historical script: 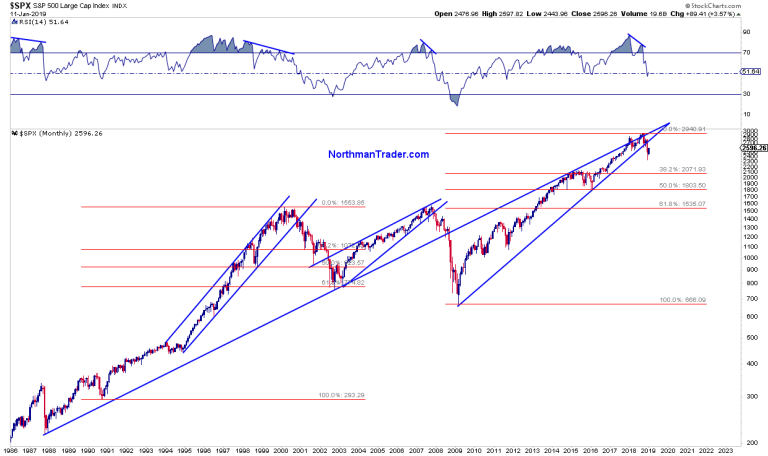 For now markets have still room higher as many charts are not anywhere near overbought on the daily or weekly time frames, but this rally has not yet been tested. Earnings reports, economic reports and coming liquidity withdrawals will likely put this rally to the test during the rest of January and the test could come at any moment for any reason as none of the structural causes of the Q4 drop have disappeared or solved.

See the thing is, as marvelous as this rally appears, its structure leaves room for a decidedly bearish interpretation: 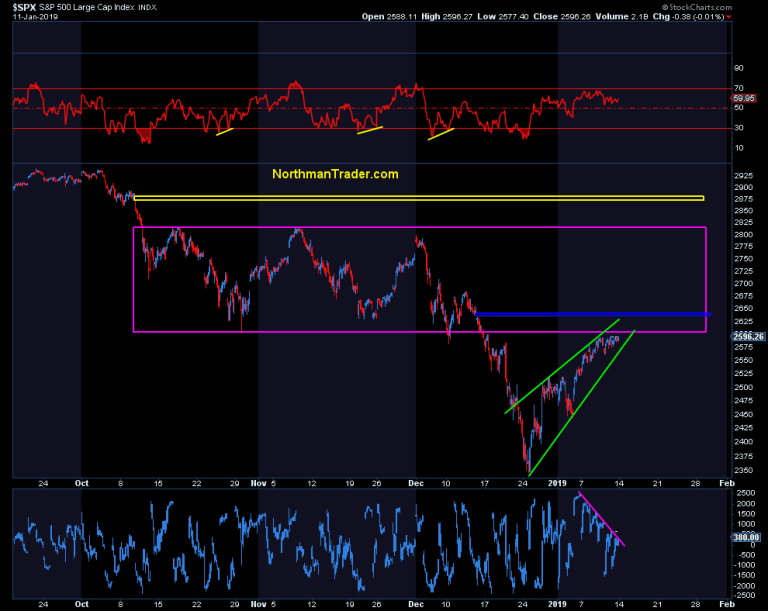 A rising wedge with weakening internals beneath new highs. So buckle in, nothing’s been proven either way yet and it’s early in 2019. Lots can and will happen.