While traditionally it is JPMorgan Chase that kicks off bank earnings season, this quarter, Citigroup is taking the spotlight with its just reported Q4 results (followed by JPMorgan and Wells Fargo & Co. on Tuesday), and its earnings numbers are anything but a welcome harbinger for what to expect.

Citi reported adjusted EPS (excluding tax reform effect) of $1.61, slightly better than the consensus estimate of $1.55, thanks to a drop in the company’s effective tax rate, which dipped to 19% in Q4, and would have been 21% ex-tax reform 21%, both lower compared to the 25% a year ago. 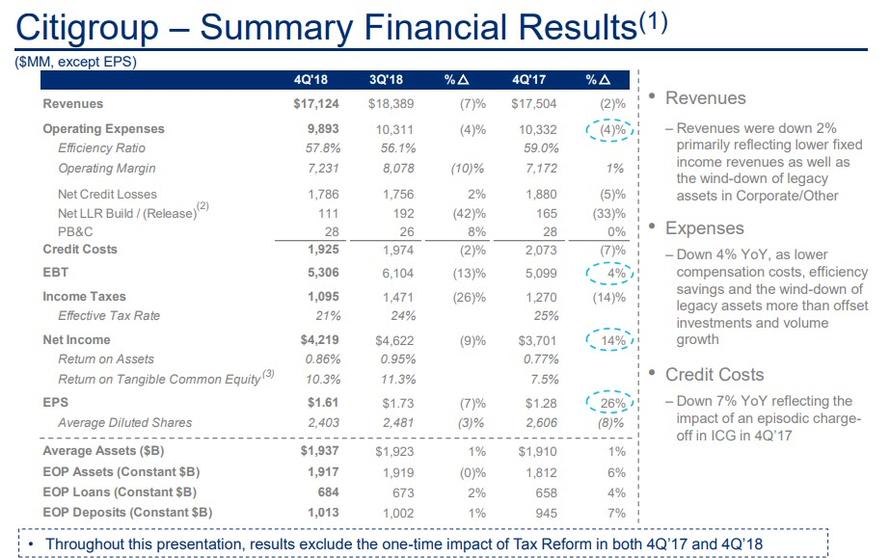 That was it for the good news, because one look at the top line reveals an ugly miss as 4Q revenue $17.1BN missed the consensus estimate of $17.6BN badly, as a result of a sharp drop in fixed income markets revenue which fell 39% sequentially and 21% y/y to $1.94b vs estimate $2.23b. This was the lowest fixed income print since 2011, and the worst performance under CEO Michael Corbat. 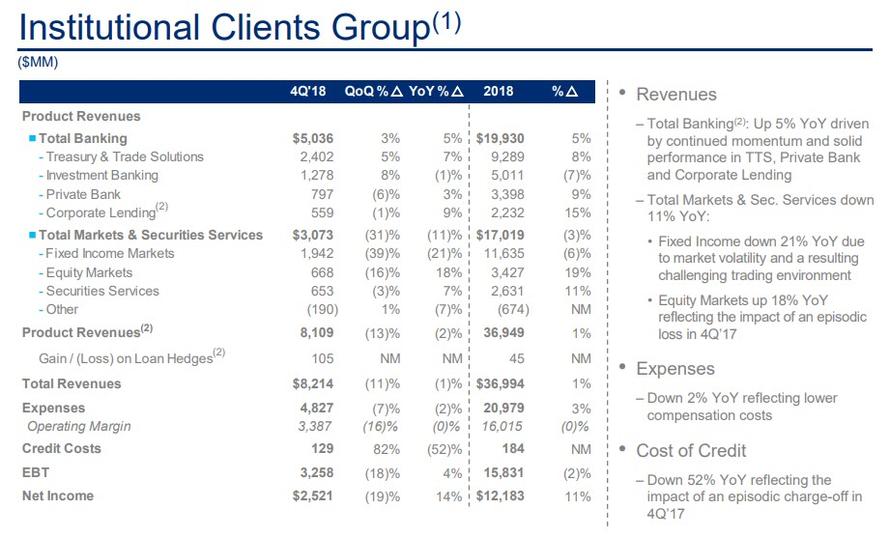 Indicating just adverse the trading environment of the past month was, Citi missed a full-year profitability target by an even bigger margin than it signaled only five weeks ago.

Meanwhile, on the expense side, 4Q operating expense fell 4% y/y to $9.9b, driven by lower compensation costs, efficiency savings and wind-down of legacy assets, partially offset by investments and volume growth; the bank’s 4Q efficiency ratio dropped again to 57.4% vs 57.7% in 3Q. 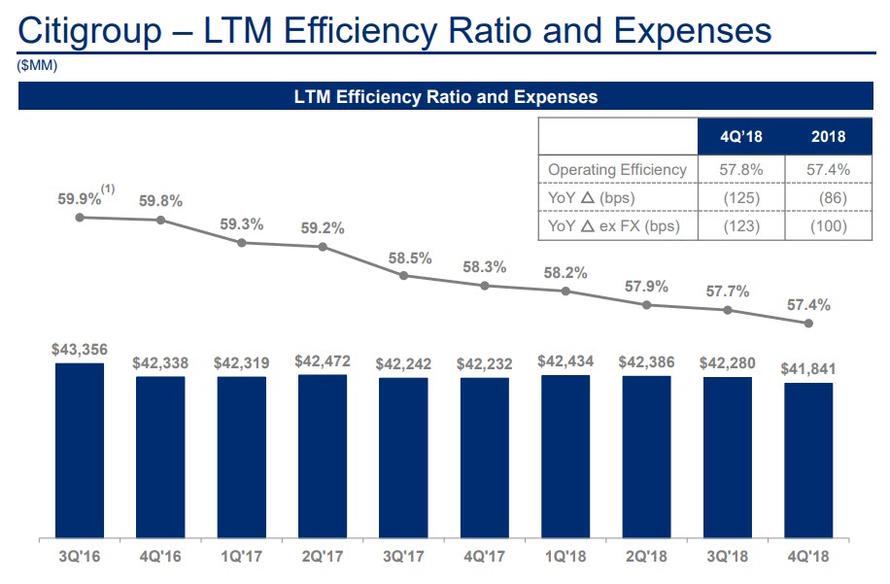 There were no major shocks in the bank’s balance sheet, as 4Q loans rose 3% to $684BN, while excluding FX translation, loans rose 4%. According to the report, the bank’s 4Q cost of credit fell 7% y/y to $1.93BN, primarily driven by an episodic charge-off in Institutional Clients Group in prior-year period.

The bank’s Net Interest Margin was virtually unchanged in Q4, rising fractionally to 2.71% from 2.70% in Q3. 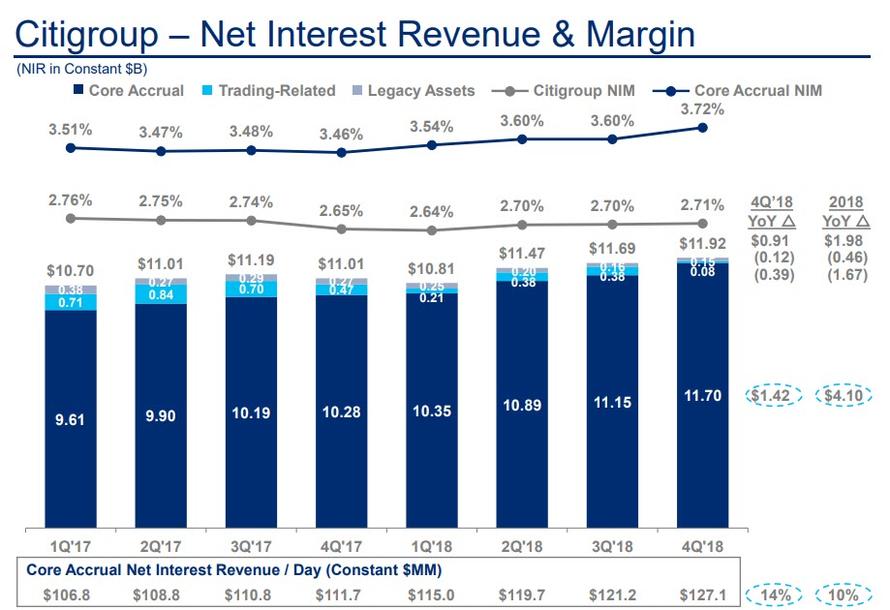 The bank’s allowance for loan losses in Q4 was $12.3BN, or 1.81% of total loans virtually unchanged from the $12.4BN, or 1.86% a year ago, suggesting that the bank sees neither an improvement nor deterioration in the broader economy.

In Q4, Citi as one would expect, repurchased 74 million common shares in 4Q.

“A volatile fourth quarter impacted some of our market sensitive businesses, particularly Fixed Income,” CEO Michael Corbat said, offset by strong performance in Institutional Clients Group accrual business and underlying growth in U.S. Branded Cards and solid performance from Mexico franchise. “For 2019, we remain committed to delivering a 12% ROTCE and continuing to improve our operating efficiency during the year.”

The market was clearly displeased with the collapse in Fixed Income revenue, which however had been telegraphed earlier by another weak report from Jefferies, and now the risk is that the other big banks will follow with similar slumps in the highest-margin business segment at a time when Net Interest Margin has collapsed thanks to the near inversion of the yield curve. 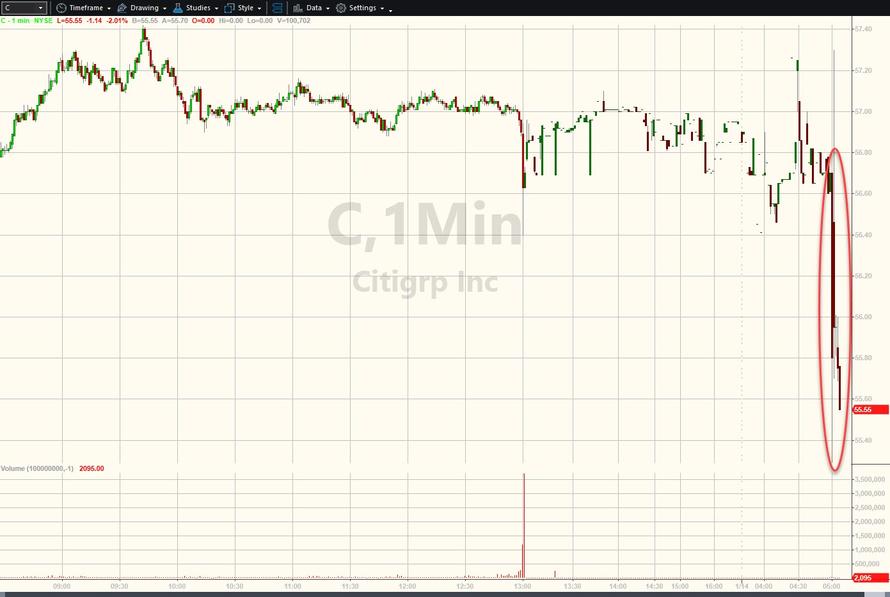