For weeks I’ve been telling my subscribers that something changed in the gold market. Since Donald Trump’s election there was a pretty clear pair trade between the U.S. dollar and gold.

And that trade was most manifested in the price of gold in euros.

During last summer gold experienced its worse (in terms of time) downtrend of the seven-year bear market. 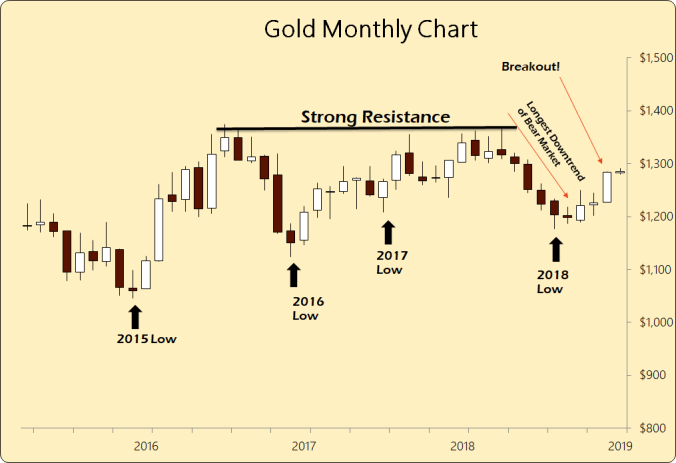 But since bottoming in October it has rallied, albeit weakly. It is still mired in that bear market, gamely trying to push through the $1300 barrier. The important zone is the $1365-75 post-Brexit vote area.

And with Brexit very much up in the air at this point, despite the best efforts to project otherwise by The Davos Crowd and their political/media quislings, gold’s relative weakness is a real worry for long-suffering gold bulls.

While the currently monthly chart is a mildly-bullish uptrend, and has been since December 2015, it is a counter-trend withing a broader bear market that has not finished.

But, we know all this. Nothing about gold has been interesting for months. Newmont Minng (NYSE:NEM) and Goldcorp (NYSE:GG) announced a huge merger the other day, funds are scrubbing gold from both their names and their portfolios, investors have lost all interest.

That is because the real story is not what’s happening in the U.S., and consequently the dollar, it is Europe.

And this is reflected in the euro.

As I said at the beginning, the election of Donald Trump created a very strong pair trade between the euro and gold. Since the October bottom, however, that trade is breaking down. 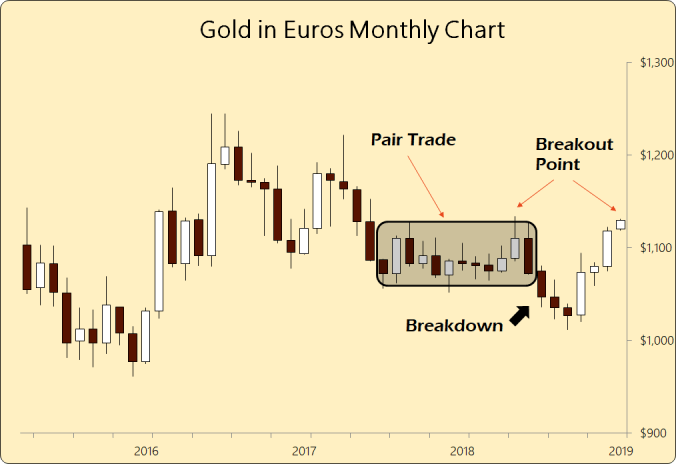 Look at the strength of the move by gold in euros since the October low. This is now challenging the 2018 high — a triple top breakdown — and hinting at a push towards €1200. 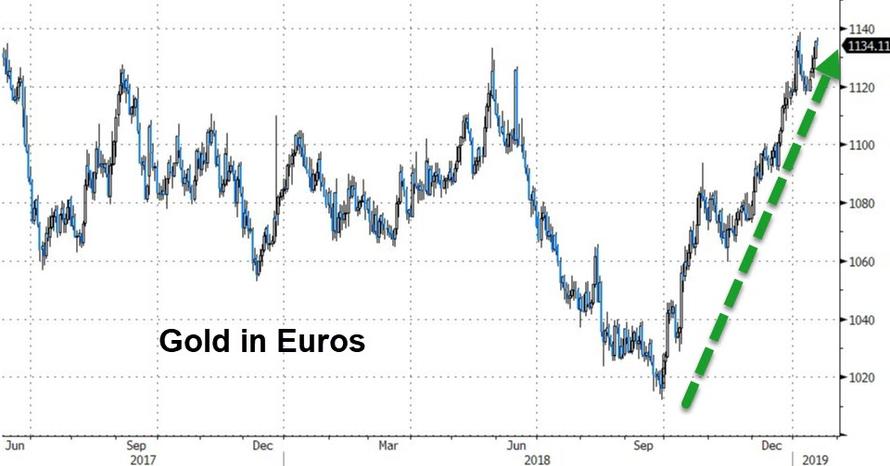 This is a far more bullish move than we saw in dollars. And it says that the breakdown in gold last summer may very well be the false move to get everyone on the wrong side of the trade.

New bull or bear markets happen only when a significant majority of actors are betting with the current trend which has played out. Once everyone is a bull there are no more buyers and vice versa.

It also screams that investors are now looking at gold as a safe-haven play again and it is not purely trading as a currency pair. There is a new dynamic at play that hasn’t been there, frankly, since the run up to Brexit.

Moreover, it has been plainly obvious watching the day-to-day trading of both gold and the euro that there is a concerted effort to manage this price level.

Gold isn’t breaking out in Japanese Yen or Swiss Francs, at this point only the euro and the British pound. 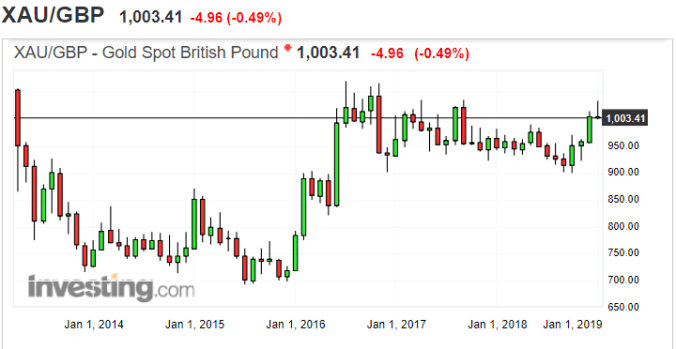 So despite the Project Fear mongers, gold is making the right noises about where things are heading. Gold’s primary role is as a check on the public’s confidence of political institutions.

A secular bull market only happens when Gold is rising against every government currency. Given the importance of the EU to the global trade and financial status quo a breakdown there politically has the potential to turn a localized bull market into a secular one.