As with many terminal patients the initial hope is that aggressive treatment would work and cure the patient. But when the one time emergency round of drugs didn’t cure the patient additional drugs were needed and turned the patient into a hopeless junkie. After multiple injections a sense of dread was making the rounds. QE1 did not cure the patient, QE 2 and 3 were required with a little twist here and there thrown in. But the Fed doctors kept promising all would be well and the addiction could be stopped and the patient returned to normal. 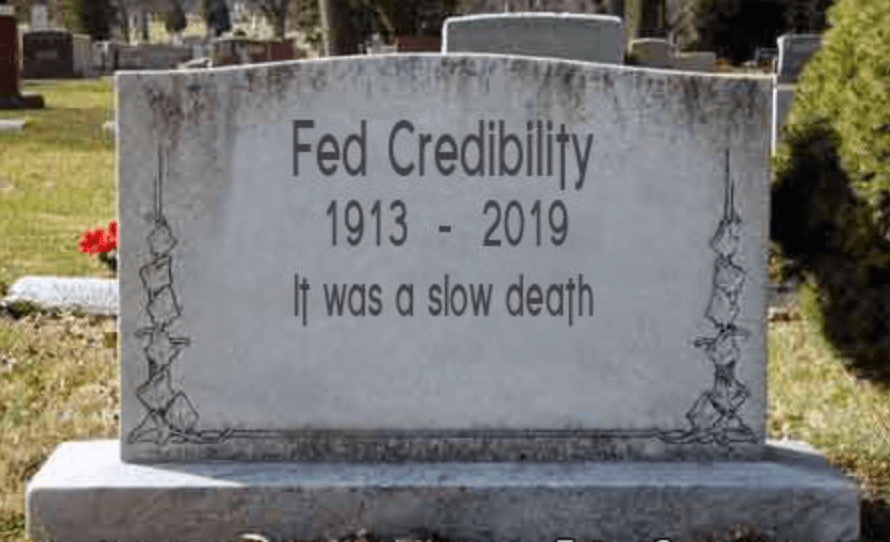 And so it looks promising for a while. There was that scary flare up in 2016 when the patient regressed and the normalization had to be put on hold, but then a miracle drug came along called Tax Cut and suddenly it seemed as if the removal of drugs from the system could be accelerated.

So jubilant and optimistic were the Fed doctors that they promised further rounds of withdrawal and kept pointing to their dot plot of normalization.

Yet here we are, a mere 3 months later and the Fed doctors are at a loss again. Unable and unwilling to admit to the patient the true nature of the disease the Fed doctors once again decided to stop all withdrawal of the drugs, worse, they indicated they may have to administer new drugs to come. The patient begged for more drugs and the Fed doctors absolved themselves of their hippocratic oath and capitulated once again to the patient’s scream for another high, a scream only drowned out by the dying sigh of the Fed’s credibility, the initial casualty in this war on monetary drug dependency.

For it is true, the Fed doctors failed to wean off the patient:

Because deep down everybody knows, the Fed is the market’s bitch:

Fed went from 4 rate hikes to zero and from balance sheet reduction on autopilot to flexible. All in the course of 1 quarter.
Just pitiful.
The Fed is the market’s bitch.

It’s not a secret, everybody knew all along:

But now Jay Powell has made it official and killed off the Fed’s credibility in the process.

It’s probably just as well. It’s been painful to watch as everybody knew the probability of survival was low. It was a slow death. And nobody wants to see suffering longer than needed and everybody knew it anyways.

As to the patient? Well, he’s back on the drip, smiling at the prospect of his final fix. The 10 year addiction never ended and the patient remains uncured. Yet the patient can’t get a new high without new drugs and so the current satisfaction at seeing the drip may turn into a great disappointment first before the new drugs finally arrive. See the Fed doctors have been withholding a vital piece of information from the patient: We can’t cure you, we can only get you hooked on drugs to make you feel better. In medical terms that’s called malpractice, which typically kills off the credibility of any medical professional. It shouldn’t be any different for a central bank. And it isn’t.