On the surface, today’s blistering jobs report which notched the 100th consecutive monthly gain in payrolls in style, with some 304K (estimated) jobs added to the US economy, was not impacted by the record government shutdown which lasted for nearly the entire duration of January, with the BLS stating that “there were no discernible impacts of the partial federal government shutdown on the estimates of employment, hours, and earnings from the establishment survey.”

Bloomberg economist Yelena Shulyatyeva doubled down on this, stating that “the government shutdown had no impact on January payrolls. While the shutdown affected roughly 380,000 government workers who were deemed “non-essential,” they were counted as employed since they received back pay.”

To justify why the BLS “pro formad” the jobs report, it explained that “employment in federal government was essentially unchanged in January (+1,000). Federal employees on furlough during the partial government shutdown were counted as employed in the establishment survey because they worked or received pay (or will receive pay) for the pay period that included the 12th of the month.”

And yet it is not true that the shutdown did not affect the jobs report.

For one thing, as the BLS says in the very first line of the jobs report, “Both the unemployment rate, at 4.0 percent, and the number of unemployed persons, at 6.5 million, edged up in January. The impact of the partial federal government shutdown contributed to the uptick in these measures,”

Next, employment as measured by the Household Survey, actually tumbled by 251K to 156.694MM, with the slide impacting both the U3 and U6 unemployment rates which rose to multi-year highs as the total level of the civilian labor force was roughly unchanged. 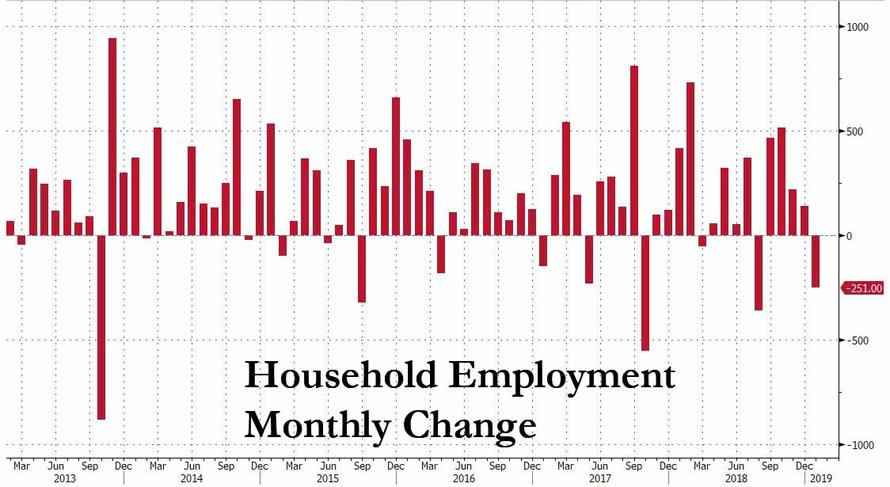 Third, there was yet another place where the government shutdown impacted the jobs report: as the BLS notes, the number of persons employed part time for economic reasons (i.e., involuntary part-time workers) increased by about one-half million to 5.1 million in January. This was the biggest increase since 2012; nearly all of this increase occurred in the private sector and according to the report, “reflects the impact of the partial federal government shutdown” (persons employed part time for economic reasons would have preferred full-time employment but were working part time because their hours had been reduced or they were unable to find full-time jobs). This is shown in the chart below.

Still, despite these “glitches” the broader report was certainly very strong, as Neil Dutta from Renaissance Macro explains:

“We are told not to pay attention to any one jobs report and that goes double for this one because of the government shutdown. That being said, the main story comes through loud and clear. The U.S. economy is not operating at full employment. Strong growth continues to draw workers back into the labor force, driving the participation rate higher. This justifies a go-slow approach from the Fed. Buy stocks.”

Or maybe the jobs report wasn’t strong at all for another, far simpler reason: much more of its was estimated than normal. As Bloomberg’s Andrew Cinko warns, we should probably brace ourselves for another big revision to the job-market data when February rolls around. That’s because the survey response rate for January was even lower than December’s woefully weak rate: consider that today’s report was based on a 60.7% response rate; December’s initial estimate was based on a 61.0% rate, which rose to 88.3% for today’s revised data. The low December response rate was a reason Wells Fargo economist Mark Vitner was wary of the big December job gain.

Ironically, whether it is correct or entirely fabricated for political reasons or otherwise, it is safe to say that the jobs report, or any other economic indicator for that matter, is now irrelevant at least until the summer when the Fed’s “patient” period is expected to expire, and concerns about the Fed potentially hiking again return.

Until then, Dutta is right: “buy stocks“… on autopilot.