Authored by Raul Ilargi Meijer via The Automatic Earth blog,

The problem is, of course, that not only is economics bankrupt but it has always been nothing more than politics in disguise.

It’s often hard to understand how people can be aware of something but then fail to link it to a perfectly logical next step, or even multiple steps, and see where it fits in a larger scheme. There really are people out there, believe it or not, who look at economic and political developments over the past decade in any particular western country and believe they are unique to that country.

In reality, while things may play out slightly differently from one place to the other, the core causes of what’s been unfolding are the exact same ones in every single location. The reactions of incumbent politicians and economics has been the same as well: massage the numbers and the media, keep the rich and powerful happy, and make sure you and yours are on the ‘right side’ of the line.

In France, the main complaint that the Yellow Vests movement has now taken into its 13th consecutive weekend is crystal clear: people can’t pay their bills anymore. In the UK, austerity has demolished wages, social care, the NHS and much else. In the US, many millions of Americans can’t afford a $400 emergency payment, have ever scarcer access to healthcare and live from paycheck to paycheck.

Rinse and repeat for every western nation. The storylines vary somewhat, but they all tell the same tale, they could be, they are, chapters in the same book. And it makes one think if people are not connecting them.

That is true in France, and it is also true in the UK, US and many other countries. People may not see liberalism as their problem, or even know, let alone understand the term, but what they do understand is they can’t pay their bills anymore. And Macron’s response, just like that of Washington and London, is more neoliberalism, or, again in Onfray’s words:

“This is an order that is strong against the week, as we can see on the streets, and weak against the strong”. [..] “The [liberal] Maastricht state is “cruel to those who carry the burdens of globalization” and “simply by declaring their poverty, these people have been ideologically criminalized.”

“We live in a world where those who make 100,000 a month convince those who make 1,800 that everything is going wrong because of those who live on 535 euro. And it works… (thanks to the media)” That’s what the Yellow Vests are about. 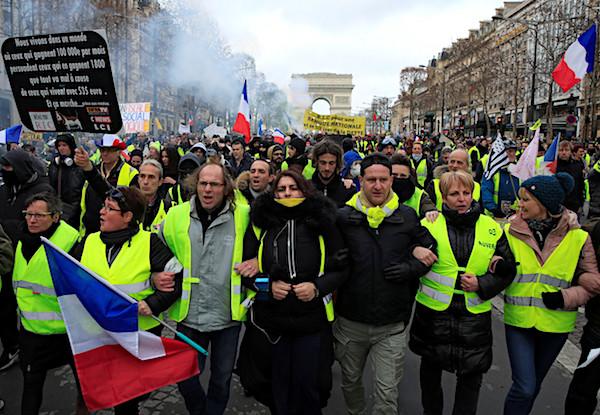 Again, it’s not about the term (neo-)liberalism, and it’s not some ideological question or fight, it’s about people not being able to pay their bills, and about politicians leaving them hanging all alone in a freezing wind. Nor is it a left against right issue. Western countries only have formerly left parties left; people who can’t pay their bills have been left to fend for themselves, no matter what they vote, and they finally understand that.

In Italy, traditional parties were all but wiped out to be replaced with the Lega and M5S. In France, ditto, but there Macron was the ‘new’ guy. In Germany, Merkel still holds the CDU/CSU ship somewhat steady, but she’s a goner and the right rises.

In Britain, there’s still only the two main parties, but they’re already history. It makes no difference what Jeremy Corbyn does or doesn’t do, he’ll be crushed by the betrayal Tony Blair inflicted on the nation in name of the same Labour Party now ‘led’ by Corbyn. While the Tories, like the Democrats in the US, rely on having taken over the media.

But it’s still a bit bewildering to see Andrew Rawnsley, the Observer’s “award-winning chief political commentator”, no less, write an entire article about what’s ailing British politics without linking this to the rest of the world, where the exact same issues play out. Of course it’s obvious that Brexit has become a divisive issue, not only in UK politics but also there, and not just between parties but also within them.

But if anything, Brexit is not a cause but a mere symptom of the British variety of the Great Discontent. The cause is that in Britain, too, people can’t pay their bills anymore. One country gets Trump, the next one Yellow Vests, and the third gets Brexit.

It is true that the big two can still gather up a lot of votes. After decades of decline in their combined vote share, it blipped up at the last election. But I don’t think that truly indicated renewed enthusiasm for either of them. It was a false positive induced by an electoral system that compels many voters to make a forced choice between the unappetising and the inedible.

It doesn’t mean that these nose-holding voters like what’s put before them. The current choice on offer is so disdained that, when pollsters ask who would make best prime minister, Theresa May and Jeremy Corbyn are regularly beaten into second and third place by Neither.

More than half of the electorate say their views are not properly represented by the existing political parties. Many politicians can’t stand the parties they represent. Some actively and publicly rage about what has become of them. I cannot recall a period in my lifetime when so many MPs have expressed so much disgust and despair with the state of their own parties.

Mr. Rawnsley manages to avoid any mention of anything at all existing outside of the British borders in the entire article, other than chiding Corbyn for failing to condemn Maduro. And you’re right, if that is the extent of your media, or even that of the formerly left-leaning bit, you may need an extra decade or so to figure out what the rest of the world already knows.

In the US, Trump replaced and/or took over the Republican Party, while Ocasio-Sanchez -AOC- is the only strong voice for the Democrats. Sure, she’s 29 and can’t run for the White House, but given that the alternative is Pelosi/Schumer and much more of that exact same cabal, anyone with presidential dreams had better get her blessings.

And sure, her Green New Deal/Dream can easily be dismissed as crazy, but pray tell what the difference is between how the Green New Deal might be financed, and how the Federal Reserve has financed its QE schemes. Perhaps the big difference is who profits; in one instance, the banks, in the other, society at large.

Or from a different perspective, there, too, AOC is like Trump: first, you start big and after, you see what can be done. Her version of the art of the deal. Besides, she has a plan, and nobody else has one. Except perhaps for Bernie, but his credibility was fatally wounded by letting the DNC waltz all over him in 2016.

And his age is not going to help: if you’re really fed up with what’s there because it’s disappointed you three ways to Sunday and now you can’t pay your bills, you’re not going to vote for grandpa, you’re going to go for someone young. Still, if Bernie hooks up with Ocasio, he may have a shot.

For all the others in the already crowded field, it’s what have you done for me lately, and they all either haven’t done dick all or they can’t string two words together without looking like someone wrote it all down for them. Look for a whole bunch from the Clinton/Wasserman mold (i.e. every candidate so far) to support the Green New Deal, but only to sabotage it, and Ocasio, at the first available opportunity.

If people already find the very large and very obvious political changes too much to comprehend, here’s some awkward news for you, and it’s not just that the media vs social media fight must inevitably lead to an ever stronger tsunami of ‘news’ overkill. Though that’s a big one: the media once upon a time reported the news, an outdated business model; today they don’t report the news, they manufacture it.

It’s more profitable because people are more gullible and/or they’re drowning in the giant overkill waves. I like that tsunami metaphor for news dissemination: people think social media will work to their advantage, like when the waters recede after a quake, that they have more control over their news. But then it all comes back in one big go and they’re completely lost.

The main upcoming event in media and politics won’t be the Great Political Discontent, it will be the economic one. Those who can’t pay their bills today will be the first victims of the massaged economic numbers finding themselves subject to gravity once again. Central banks won’t be able to prop up the zombies anymore, or the facade. The media will turn against the prevailing order when they deem it profitable. Or, rather, in a desperate attempt at survival.

What once was the middle class will join the various Yellow Vest groups around the world. So will whatever it is you call what took the place of the middle class. Certainly after their housing bubble mortgages become eligible for margin calls. Then all that’s left will be the very rich and the very poor. It’ll be back to the Middle Ages. Just with 20 times as many people. And with over half the wildlife gone, and the arable land, and 80% of insects gone since 1980 alone.

But yeah, we can also pretend that any problem we encounter can only possibly be a temporary blip, and there’s sunshine on the way around the corner, not pitchforks. Still, I’m pretty sure it’s precisely because we do nothing but pretend, that we gather all the problems in the first place that make one think of pitchforks, if even so briefly.

And I’m also pretty sure that we’re a lot less smart than we tell ourselves we are considering we kill off that without which we have zero chance of survival, and considering we let people starve in the richest human society the world has ever seen (make that: will ever see), but we still have trouble seeing our own noses, let alone following them. 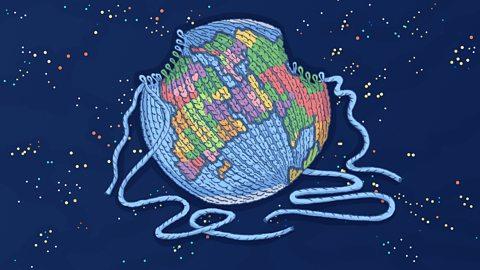 We’re such blind masters of pretence that we hardly ever noticed the Great Discontent entering our nations, our communities and our homes. What then are the odds we will perceive the arrival of the Great Unraveling?