Authored by Kyle Bass and Daniel Babich, op-ed via Bloomberg.,com,

China’s pernicious debt load and rapidly weakening economy mean the U.S. has more leverage in trade talks now than it ever had before… 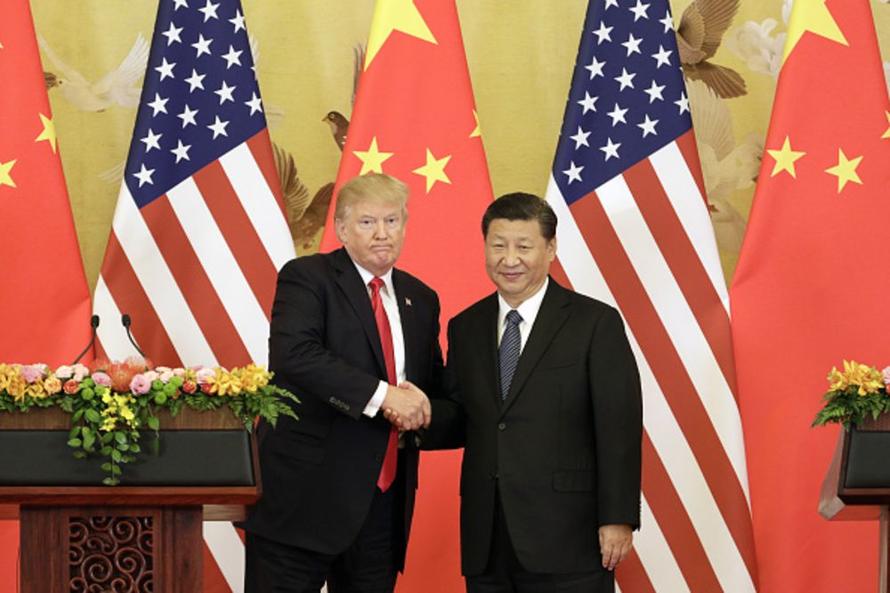 When it comes to the trade talks with China, President Donald Trump and his negotiators have more leverage than any U.S. administration has ever had. Chinese policy makers are desperate for a trade truce with the U.S. in order to avoid more damage to China’s economy by further pressuring its trade surplus and export industries.

There is speculation that Trump has told his negotiators to “get a deal done” in order to put an end to recent market volatility, but that would mean foregoing a historic opportunity to come to a major restructuring of America’s relationship with China at a moment when China is most inclined to agree to concessions. We have come too far for Trump to take the easy way out.

“Water keeps the boat afloat but can also sink it” is a Chinese proverb that neatly summarizes the nation’s current economic predicament. The debt that has hydrated the Chinese financial system for the past 10 years is now drowning it. During the darkest days of the financial crisis in 2008, China launched a 4 trillion renminbi ($593 billion in today’s dollars) infrastructure plan that was accurately described as pulling the global economy out of recession. This infrastructure stimulus plan never ceased, and by 2017 the 4 trillion of spending ballooned to 14 trillion, according to China’s National Bureau of Statistics.

At first, China benefited from the economic reforms of the 1990s, its ascension into the World Trade Organization and the resultant inflow of foreign investment by Western companies. By 2009, the previous decade of strong growth meant wages and price levels had risen such that China was no longer a low-cost manufacturer. This made it implausible that exports could drive economic growth. Therefore, China’s central bank printed money to fund a gargantuan stimulus program.

History tells us that growth that is funded by excessively rapid credit and money creation can lead to a variety of asset bubbles and to financial, credit and currency crises. A broad measure based on data from the People’s Bank of China and other agencies that includes both bank assets and shadow banking assets such as wealth management products, trust beneficiary rights and trust loans, places China’s total credit at $48 trillion, about 3.7 times its gross domestic product. That compares with $24 trillion for the U.S. despite China having an economy that is 37 percent smaller. China’s decade of rapid credit creation and investment spending has led to soaring property values, despite high vacancy, and low wage levels. These led to tepid export growth and a stagnating economy as the export industry lost competitiveness.

The last 12 months have seen key Chinese economic indicators such as industrial production, car sales, retail sales and investment all decline to multi-year lows as the previous round of stimulus abated and China’s debt burden continued to cause a downward economic spiral. The world is finally waking up to the risks to the precarious position of the overleveraged Chinese financial system, which is why we have seen its stock market fall as much as 25 percent over the last year. (Disclosure: Hayman Capital Management, where the author is chief investment officer, has positions in the Chinese currency.)

Primarily focusing on the first objective is a mistake because it will ultimately erode the advanced parts of the U.S. economy which support the most valuable jobs in the U.S. This does not advance America’s long-term interest and is only a short-term fix for a very complex problem.

Reducing tariff rates and adjusting foreign ownership rules would be a good thing, but this would not end China’s long-standing policy of bulk economic espionage and theft, which annually costs America’s economy at least $300 billion, according to U.S. government estimates. Multiple U.S. administrations have sought to engage China on these issues for more than two decades, and the commitments made to the U.S. have rarely been fulfilled. America needs a commitment from China’s government that it will put an end to espionage and theft and agree to legal and financial repercussions for their theft. Trump’s administration should continue to push for this and not end talks until there is permanent change in China’s behavior.

For China to be a constructive member of the multilateral world trading system it must grant foreign companies, operating either inside China or outside, the same rights and privileges as Party affiliated national champions. The current mercantilist system, based on subsidies and preferences, needs to be dismantled, but the concessions offered to date lack commitment.

The Trump administration needs to fully understand the leverage it has today – and the increased leverage that it will have after March 1, the end of the 90-day reprieve from the imposition of additional tariffs – is the most the U.S. will ever have. To squander this opportunity would be a catastrophe not only for Trump’s administration but for the West.