The dollar is up for the 8th straight day – even with China back from holiday – surging back into the green for 2019. 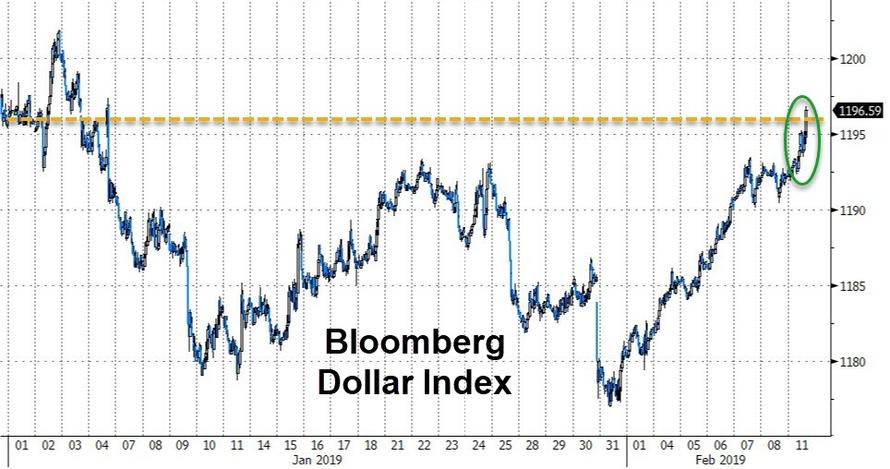 This is the longest win streak for the dollar since January 2016 and Credit Suisse has five reasons to believe the dollar will continue to surge:

2. The US current account deficit has not deteriorated, thanks to oil 12 months ago, the US overtook Saudi Arabia to become the largest oil producer globally. In turn, US net oil imports have declined to below 0.5% of GDP, close to their lowest level in 25 years. That has allowed the US current account deficit to stabilize despite the boost to consumption driven by tax reform in 2018.Moreover, as the chart below highlights, there have been periods when the USD has become significantly more overvalued despite a widening deficit, with the most notable being the mid-1980s.

3. A China hard landing would lead to a much bigger slowdown in Europe and Japan than in the US As a share of GDP, Europe and Japan respectively have twice and four times the export exposure to China as the US. Were there to be a hard landing in China, which we discuss elsewhere, the second-round effects would likely include a stronger dollar as a result of a likely devaluation in the yen and euro.

We would also assume resilience in US macro momentum from here, thanks to ongoing strength in the service sector which is underpinned by a relatively tight labour market. In contrast, the euro area’s more manufacturing-heavy economy would be affected by China or the trade war more broadly. As a result, the relative strength in US macro momentum could help underpin the USD, as the first chart below suggests.

5. Speculative positions are only mildly bearish on the euro

At the same time, the dollar strength is weighing on commodities, most notably, oil which has plunged to a $51 handle as fears about the health of the global economy triggered further weakness following the worst week of the year last week…

As Bloomberg notes, West Texas Intermediate has reversed course after the best January on record as a lack of progress on the trade war and growth warnings from Europe, Asia and elsewhere depressed the demand outlook. In more bearish news, American drillers put seven additional oil rigs to work last week, bolstering concern that record U.S. production will undermine efforts by the Organization of Petroleum Exporting Countries and its allies to curb a global glut.

“We see prices at the moment at their fair value,” said Eugen Weinberg, head of commodities research at Commerzbank AG in Frankfurt. “There are a number of supporting factors as well as negative factors which balance each other out and keep the market in check.”

However, fears are intensifying that a US-China trade deal won’t be reached, which could spur a tit-for-tat escalation that would make an already shaky global growth outlook even worse.