Perhaps out of humiliation over the ongoing spectacular tragicomedy that is Brexit, and in desperate need of a distraction from her domestic political troubles, Theresa May has taken a page out of the Donald Trump playbook and has decided to send Britain’s new aircraft carrier to China’s backyard in what The Times has dubbed “a show of strength”, because apparently now the UK believes it is a US stunt-double when it comes to sending Beijing messages about its territorial ambitions in the South China Sea.

May’s defense secretary, Gavin Williamson, will say today that “Britain must be ready to use hard power” to protect its interests, The Times reported, although it wasn’t clear just what interests the UK has just off the Chinese coastline. Williamson will warn that Russia and China are blurring the boundaries between peace and war and declare that Britain must stand up to those who “flout international law”, a principle that “may lead to us intervene ourselves.”

“To talk but fail to act risks our nation being seen as little more than a paper tiger,” he will say, seemingly unaware of how the world currently views Brexit ground zero. 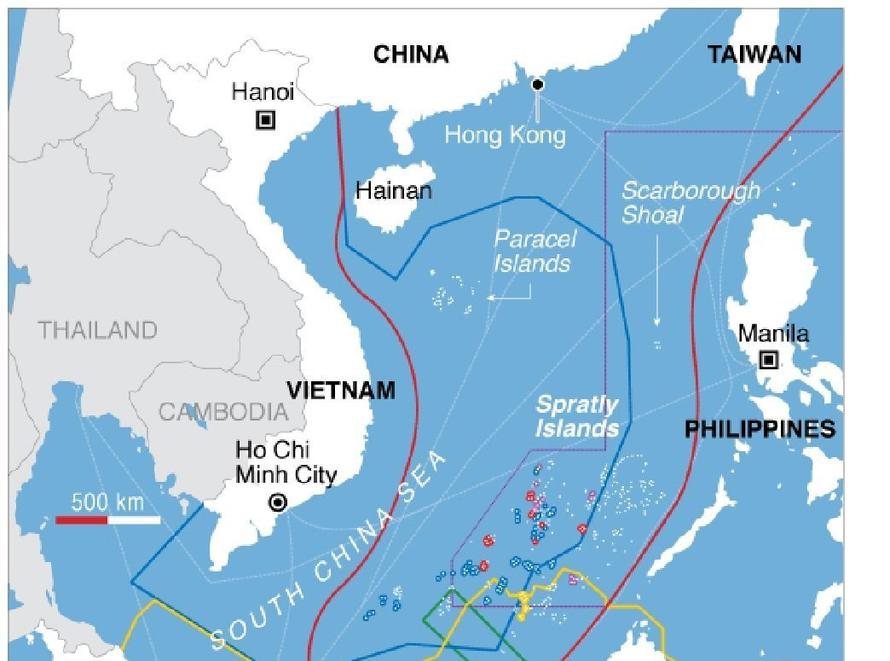 Williamson will also announce details of a global tour that the new aircraft carrier, one of two costing a combined £6.2 billion, will undertake according to the British newspaper, carrying two squadrons of British and American F-35 multirole stealth fighter jets.

HMS Queen Elizabeth, the country’s largest warship, will be sent to the Middle East and Mediterranean, as well as the Pacific, where the Royal Navy narrowly avoided a clash with the Chinese. Last summer Beijing accused London of provocation after the Royal Navy warship HMS Albion sailed near the contested Paracel islands in the South China Sea. China responded by sending a frigate and two helicopters but the attempt to escort HMS Albion out of the waters failed and it continued its passage.

Just like the US, the UK has expressed a particular interest in deciding who is the de facto ruler of the South China Sea which is also the world’s busiest commercial shipping route, and where China has built a series of artificial structures and begun to militarise them.

In 2017 Boris Johnson, then the foreign secretary, signaled that the carrier would be used to conduct “freedom of navigation” operations in the area. In recent months other Royal Navy vessels have joined the US in exercises there but avoided entering the 12-mile zone around territory claimed by China.

Last year USS Decatur came within 41 metres of a Chinese destroyer, raising tensions. Subsequently, in response to Beijing reneging on its 2015 promise not to militarize the disputed waters, China’s navy’s invitation to last year’s multinational Rim of the Pacific exercise in Hawaii was withdrawn.

China has flaunted international demands to restrain its naval ambitions, and in 2016, Beijing rejected an international court ruling that invalidates its claims to the area. The US views the sea as a vital international maritime corridor.

And so, with the UK domestic political situation going swimmingly, Williamson has indicated that Britain intends to expand its international presence in the Asia-Pacific region and the Caribbean where it somehow won’t be seen as a joke by Beijing. As a result, his speech at the Royal United Services Institute in Westminster will signal that the government is taking a more hawkish stance. “We have to be ready to show the high price of aggressive behaviour,” he will say.

“Against adversaries upping their spending and advancing technology, we have to respond. If we do not, we will find ourselves with fewer options when we face threats in the future,” he will say.

Perhaps to avoid being seen as a laughingstock, the US will embed aircraft with the carrier because Britain recently took receipt of only 17 of the 48 F-35 jets that it has committed to buying. The UK “show of force” comes after he criticised the Chinese telecoms giant Huawei last month and voiced grave concerns about it supplying infrastructure for Britain’s mobile network, amid espionage fears.

Meanwhile, just to make sure China is really pissed off, overnight two US warships sailed near islands claimed by China in the disputed South China Sea, prompting an angry response by China’s foreign ministry, which said the ships entered the waters without China’s permission, ministry spokeswoman Hua Chunying told a daily news briefing.

The operation was the latest attempt to counter what Washington sees as Beijing’s efforts to limit freedom of navigation in the strategic waters, where Chinese, Japanese and some Southeast Asian navies operate.