And so the Democratic Party has gone and hoisted the flag of “socialism” on the mizzenmast of its foundering hulk as it sets sail for the edge of the world. Bad call by a ship without a captain, and I’ll tell you why. Socialism was the response to a particular set of circumstances in time that drove the rise of industrial societies. Those circumstances are going, going, gone.

The suspicion of industry’s dreadful effects on the human condition first sparked in the public imagination with William Blake’s poem “Jerusalem” in 1804 and its reference to England’s newly-built “dark satanic mills.” Industry at the grand scale overturned everyday life in the Euro-American “West” by the mid-19th century, and introduced a new kind of squalor for the masses, arguably worse than their former status as peasants.

And thus it was to be, through Karl Marx, Vlad Lenin, and the rest of the gang, ever-strategizing to somehow mitigate all that suffering. Their Big Idea was that if government owned the industry (the means of production), then the riches would be distributed equally among the laboring masses and the squalor eliminated. You can’t blame them for trying, though you can blame them for killing scores of millions of people who somehow got in the way of their plans.

Nobody had ever seen anything like this industry before, or had to figure out some way to deal with it, and it was such an enormous force in everyday life thereafter that it shattered human relationships with nature and the planet nature rode in on. Of course, the history of everything has a beginning, a middle, and an end, and we’re closer to the end of the industrial story than we are to the middle.

Which opens the door to a great quandary. If industrial society is disintegrating (literally), then what takes its place? Many suppose that it is a robotic utopia powered by some as-yet-unharnessed cosmic juice, a nirvana of algorithms, culminating in orgasm-without-end (Ray Kurzweil’s transhumanism). Personally, I would check the “no” box on that outcome as a likely scenario.

The self-proclaimed socialists are actually seeing the world through a rear-view mirror. What they are really talking about is divvying up the previously-accumulated wealth, soon to be bygone. Entropy is having its wicked way with that wealth, first by transmogrifying it into ever more abstract forms, and then by dissipating it as waste all over the planet. In short, the next time socialism is enlisted as a tool for redistributing wealth, we will make the unhappy discovery that most of that wealth is gone.

The process will be uncomfortably sharp and disorientating. The West especially will not know what hit it as it emergently self-reorganizes back into something that resembles the old-time feudalism.  We have a new kind of mass squalor in America: a great many people who have nothing to do, no means of support, and the flimsiest notions of purpose in life. The socialists have no answers for them. They will not be “retrained” in some imagined federal crusade to turn meth freaks into code-writers for Google.

Something the analysts are calling “recession” is ploughing across the landscape like one of those darkly majestic dust-storms of the 1930s, only this time we won’t be able to re-fight anything like World War Two to get all the machines running again in the aftermath. Nor, of course, will the Make America Great Again fantasy work out for those waiting in the squalid ruins of the post-industrial rust-belt or the strip-mall wastelands of the Sunbelt. 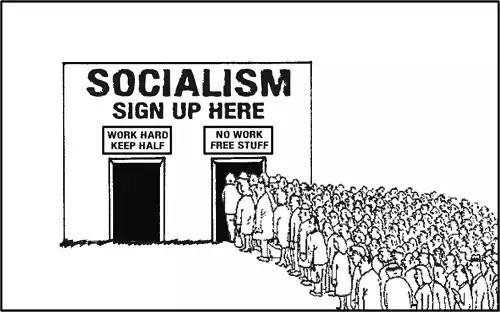 There are no coherent ideas in the political arena just now. Our prospects are really too alarming. So, jump on-board the socialism ship and see if it makes you feel better to sail to the end of the earth. But mind the gap at the very edge. It’s a doozie.