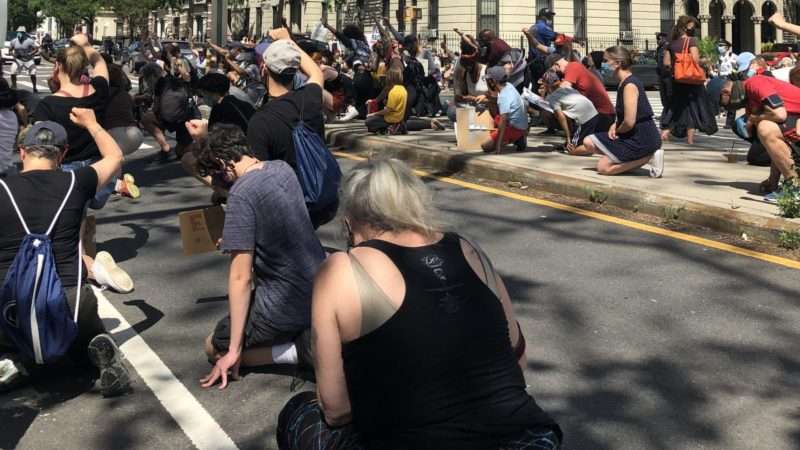 America certainly has work to do on race. For one, while cops do not kill black people more than white people, they harass and abuse black people more than white people, and the real-life impact of this is in its way just as pernicious as the disparity in killings would be. If the tension between black people and the cops were resolved, America’s race problem would quickly begin dissolving faster than it ever has. But making this happen will require work, as will ending the war on drugs, improving educational opportunities for all disadvantaged black children, and other efforts such as steering more black teenagers to vocational programs training them for solid careers without four years of college.

These are real things, upon which we must behold scenes like in Bethesda, where protesters kneeled on the pavement in droves, chanting allegiance with upraised hands to a series of anti-white privilege tenets incanted by what a naïve anthropologist would recognize as a flock’s pastor. On a similar occasion, white protesters bowed down in front of black people standing in attendance. In Cary, North Carolina, whites washed black protesters’ feet as a symbol of subservience and sympathy. Elsewhere, when a group of white activists painted whip scars upon themselves in sympathy with black America’s past, many black protesters found it a bit much.

"washing the feet of the organizers and asking for forgiveness."

Such rituals of subservience and self-mortification parallel devout Christianity in an especially graphic way, but other episodes tell the same story. Many conventional religious institutions are now rejecting actual Christianity where it conflicts with TWA teachings. At the Massachusetts Institute of Technology, a chaplain was forced to resign after writing a note exploring the contradiction between roasting the police as racist and the Christian call for love of all souls. Unitarianism has been all but taken over in many places by modern antiracist theology, forcing the resignation of various ministers and other figures.

The new faith also manifests itself in objections to what its adherents process as dissent. A friend wrote on Facebook that they agreed with Black Lives Matter, only to have another person—a white one, for the record—post this reply: “Wait a minute! You ‘agree’ with them? That implies you get to disagree with them! That’s like saying you ‘agree’ with the law of gravity! You as a white person don’t get to ‘agree’ OR ‘disagree’ when black people assert something! Saying you ‘agree’ with them is every bit as arrogant as disputing them! This isn’t an intellectual exercise! This is their lives on the line!”

This objection seems studiously hostile until we compare it to how a devout Christian might feel about someone opining that he “agrees” with Jesus’ teachings, as if the custom were to think one’s way through the liturgy in logical fashion and decide what parts of it makes sense, rather than to suspend logic and have faith.

The religious analogies pile higher by the week. Third-Wave Antiracism even has (metaphorical) sacrificial victims. The New York Times‘ food columnist Alison Roman is on suspension for criticizing in passing Marie Kondo and Chrissy Teigen for going commercial. Her sin? Criticizing not one, but two, people “of color.” (Kondo is Japanese, Teigen half white and half Thai.) Teigen has openly said that she does not think Roman deserves to be canceled for what she said, but no matter. At the Times, the TWA must have its way.

A great many intelligent people clearly consider all of the glowering postures, verbal laceration, and dismissals to be somehow an advance over how social change worked in America in the past. The seismic civil rights victories of the 1960s came about through protest, no doubt. But absent in the annals of how we got from Selma to the election of Barack Obama is this focus on individual psychology as opposed to national social and political structures.

Martin Luther King was under no impression that all white people were going to fully “love” all black people. He spent his time working for gradual change in the world as we know it via endless exchange and consultation with the powers that be, not agitating for a vague utopian conception of a society devoid of any racist sentiment. No matter what evidence people find of King’s fundamental radicalism, radicalism in his day was not centered around this recreationally aggrieved performance art, much less obsessively seeking to excoriate and destroy people suspected of impure thoughts.

Woke white liberals get yelled at by Black Lives Matter for being too woke and engaging in self-flagellation. pic.twitter.com/xx5ZdfGat1

The TWA adherent might object that today’s strategy is a second step—that the battle of yore was against overt segregation and disenfranchisement, but today making an even more equal society requires this different approach.

But why is all of this agitprop and joyous defenestration an advance over forging political change in the ways that have had such effect in the past? Those of us watching incongruously and needlessly acrid media posts and the yanking down of statues cannot help thinking the real motivator of the TWA posture is a simple joy in indignation and destruction, along with the comforts of group warmth. The white TWA adherent cherishes displaying virtue. The black TWA adherent has fallen for the Siren call of the noble victim complex, affording one the status of a Cassandra, a survivor, even the granter of absolution, as we see in some of the protest videos.

TWA people, to be sure, claim that all of this is ultimately about changing society. But in practice, the performance and fury are the main meal while the mundane but urgent work of changing society seems distinctly underplayed. One treatise on white privilege after another gives this away, such as Őzlem Sensoy and Robin DiAngelo’s Is Everyone Really Equal? After almost 200 pages of teaching the reader that being a good antiracist requires bowing down to any claims anyone not white makes about race, we assume that the final chapter might show how this counterintuitive ideology is supposed to change the actual world. Instead, that chapter simply repeats the minatory mantras from the previous chapters.

If TWA were really a political program, it would focus much more readily on making change from the grassroots on up; the psychological cleansing would feel like a prelude cherished by a few but best gotten past as quickly as possible. The idea that political work must be preceded by a massive mental overhaul of the nation is not self-standingly obvious. It is a tragically fragile proposition that reveals TWA as in essence not politics but Sunday school.

The TWA world might raise another objection, one that must be heeded. Without the fever pitch of these voices, and the dread they instill in any white person chilled at the possibility of being outed as a racist in today’s society, Tina Fey would not have pulled a few episodes of 30 Rock out of streaming because they had blackface depictions, the Dixie Chicks would not have renamed themselves The Chicks, there would still be an awful lot of statues of Confederate racists standing, and Rhode Island would not be excising the word plantation from its full name. The TWA message asks whites to look inside themselves to examine the ways they contribute to racism. This is happening to an unprecedented degree.

Yet we can be quite sure that the TWA position on these things, no matter how many and no matter how widespread, will be to dismiss them as mere optics, as if such things weren’t what they seemed to be calling for in their furious policing of psychology. The new line will be that these changes didn’t matter because they left “structures” of society in place. This bait and switch will not be a cynical ploy, but an inevitable outgrowth of the fact that TWA is a matter of ideology and attitude, not progress and pragmatism. Its liturgy requires that America always be a racist snakepit, redeemable only by a mysterious day when the U.S. “comes to terms with” racism. Just what those terms would be is never specified for a reason, which is that if there really were no racism the TWA adherents would lose their sense of purpose. (No, reparations won’t do it. Look under the hood of the most prominent calls for reparations and you’ll see that they say reparations would only be a “beginning.”)

In any case, to be sure, names and icons are just optics. More substantively, TWA has helped create some movement in America’s conversation about the cops, a problem central to black Americans’ sense of discomfort and dismissal in America. But there are two problems.

One is that truly reforming 18,000 different police departments, as well as the byzantine laws that quietly detour and destroy so many lives, will be a long, hard job of the kind King and his comrades so diligently and patiently forged. TWA activity, so focused on smoking out racist imagery, seems ill-suited to participate meaningfully in actual on-the-ground toil of this kind.

And second, we must ask: Is it necessary, for the cops to reform, that a food columnist be suspended for dissing a half-Thai model or that sincere Unitarian ministers lose their jobs?

Because this is so very much a TWA moment and because its perspective has been creeping into the fabric of educated American society over several years, we are becoming desensitized to how ancillary to civic progress is this peculiar, furious, and fantastical indoctrination. We seek sociopolitical change, yet we find on the vanguards a contingent who have founded a new religion. They insist hotly that they “really are right,” because racism is bad, isn’t it?

Indeed it is. But it is also bad for increasing numbers of Americans, out of fear for their social acceptance in wider society, pretend to subscribe to the semi-coherent tenets of an anti-empirical faith feigning higher wisdom with big words and manipulative phraseology. They see themselves as the heirs of bygone heroes who would actually have been sickened by them. Progressive Americans’ task is not to learn charismatic but purposeless self-flagellational routines, but to fight injustices with sense and logic. Only TWA adherents think the two are the same.

from Latest – Reason.com https://ift.tt/2BMl0H8
via IFTTT