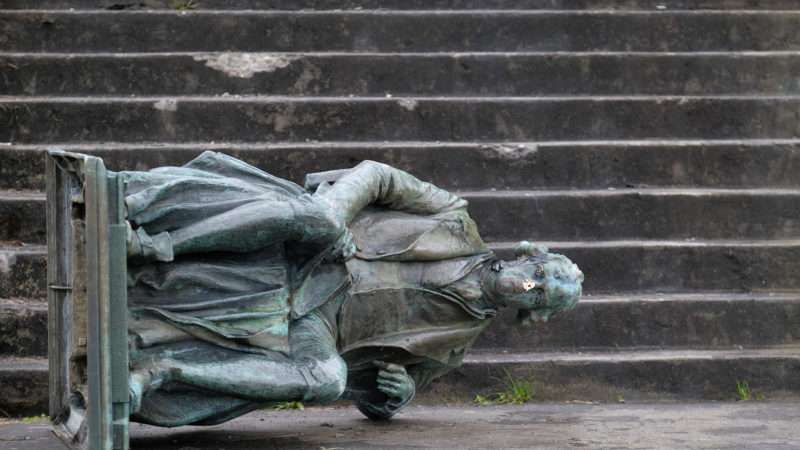 If you think America’s statue battles are at a fever pitch, then consider the battles that Europeans have waged over statues following the demise of the totalitarian Soviet regime.

During the 1956 Hungarian Uprising, a group of students destroyed Budapest’s monument to Joseph Stalin. Soviet forces quashed the revolution, but eventually the post-communist government erected a statue to Imre Nagy, who was a hero of the uprising. That wasn’t the end of the story. In 2017, Hungary’s president replaced the statue with one more in line with his pro-Russian sympathies.

Controversies over symbols never end. Sadly, the United States now finds itself in the midst of a statue-toppling, flag-revising frenzy. Because history is, as they say, written by the winners, the latest scuffles center on whose version of history will prevail. I’m not impressed by any marble likeness and have no interest in culture wars, but many Americans seem intent on fighting over these chiseled shrines.

In San Francisco, a large group of protesters recently destroyed the statues of Ulysses S. Grant, Junipero Serra, and Francis Scott Key that had previously sat uneventfully in Golden Gate Park. In Portland, Ore., protesters toppled a statue of George Washington and painted it with the words, “genocidal colonist.”

This is the latest handiwork from America’s newest iconoclasts, many of whom view the American experiment as rotten to its core. If they focused their attention instead on, say, opposing the nation’s drug war or other current injustices, the world might become a better place. But that takes hard work and is less fun than destroying things.

There are many reasons to chip away at Grant’s legacy, given his role in the Indian wars and his administration’s myriad corruption scandals, but he led the armies that smashed the slave-defending Confederacy. Grant declared martial law to destroy the Ku Klux Klan. That makes his statue an odd target for activists who are dedicated to ridding the nation of racism. Well, at least more people are paying attention to history.

Key owned slaves, and was mocked by abolitionists for hypocrisy after he wrote the “Star-Spangled Banner.” Isn’t it more interesting to wrestle with that inconsistency than banish the national anthem’s lyricist from the public square? Washington was the flawed founder of an imperfect nation—one that has done more to promote freedom and equality than any other nation.

Serra, canonized by Pope Francis in 2015, created California’s mission system. The attacks on his image have less to do with his personal behavior and more to do with what that system represented. “Father Serra represents the invasion of California and the taking of native lands,” a UC Riverside professor told this newspaper. The statue was a touchstone for that debate, which will be less likely to take place after we sanitize our parks and historical sites.

The Confederate statue issue is more understandable. Governments should remove these relics from public places. Southerners mostly installed them during the Jim Crow era and in the midst of the Civil Rights movement to make a retrograde political point. It took 130 years, but Mississippi officials finally seem poised to remove a slave-holding movement’s emblem from the flag of a state where 38 percent of its residents’ ancestors were slaves.

There’s a marked difference, however, between removing the statue of a Confederate general and demolishing the images of key historical figures simply because of troubling things they’ve done or because their century-old attitudes don’t conform to our current sensibilities.

Every noteworthy human being has done something controversial or awful. One prominent left-wing activist has even called for the removal of statues of Jesus because their Eurocentric depiction is a form of “white supremacy.” That would apparently leave no one worthy of such acclaim, which actually might be a welcome development.

People have an unfathomable need to venerate statues and fly flags, so it probably won’t be long before the broken marble corpses of Grant, Serra, and Washington will be replaced with gleaming new ones honoring other tainted humans—and their legacies will be questioned (or demolished) decades from now. The debate is getting tiresome.

Two professors recently called for renaming Orange County’s “John Wayne” airport because of offensive comments the actor made. Supervisors named the airport after him in 1979 because he epitomized a certain traditional-values Republicanism that seems almost quaint in the modern OC. I agree with just calling it Orange County Airport simply to make it easier for travelers to know where they’re heading, but couldn’t care less about the fate of Wayne’s terminal statue.

Frankly, I prefer fewer statues, flags, and debates about overpriced public artwork. How many people even looked closely at these edifices before the recent controversy? Those smitten by John Wayne, Robert E. Lee, or even Joseph Stalin should commission statues on their own property. The rest of us have more important issues to debate.

This column was first published in the Orange County Register.

from Latest – Reason.com https://ift.tt/2NUzUOe
via IFTTT