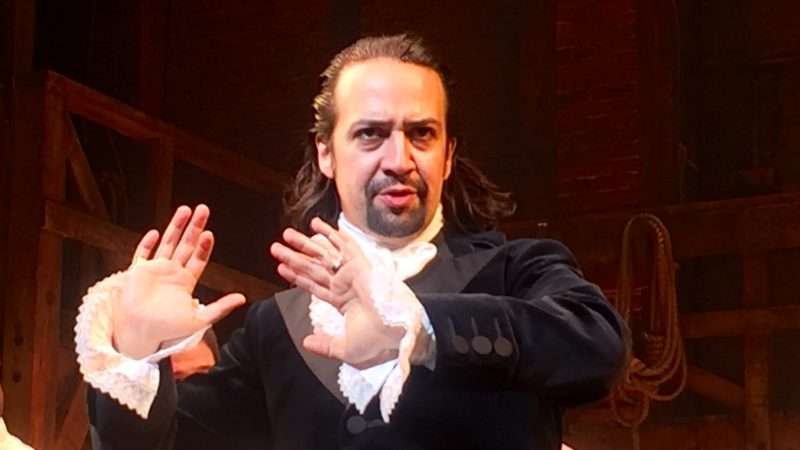 “America, you great unfinished symphony, you sent for me,” says the titular character in the Broadway musical Hamilton, as he stands seconds away from meeting his demise. The stage is dark and quiet, strewn with purple hews and barely any orchestration as the character delivers what will be his final reflection. “You let me make a difference, a place where even orphan immigrants can leave their fingerprints and rise up.”

That show and its progressive ideas—centered around Alexander Hamilton and the Founding Fathers—have once again come to the forefront of the national discussion after its release last week on the streaming service Disney+. The musical’s creators couldn’t have picked a more inconvenient time. As conversations swirl around how to honor or not honor those flawed men, I regret to inform you that Hamilton has been canceled.

You might believe so after reading through yesterday’s and today’s news. “The popular Broadway musical ‘Hamilton’ is not receiving much love from some people who are calling on Disney’s streaming service to ‘cancel’ the newly released movie version on social media,” Newsmax writes. “‘Hamilton’ is under fire from left-leaning activists,” The Daily Wire warns. “The hashtag #CancelHamilton started trending over the weekend, just after a film version of the show aired on Disney+,” Inside Edition notes.

That hashtag was essentially the sole piece of evidence offered up as proof that woke scolds are coming for Hamilton, pitchforks and torches blazing. But stans of the rap-infused musical can keep singing along with the production at home: A cursory look through Twitter shows that the hysteria is mostly fake news.

Let’s start with its genesis. Rosa A. Clemente, a former vice presidential candidate for the Green Party, claims to have conjured the hashtag in a June 28 tweet. She later linked to a petition seeking to pull the movie and declared, “you cannot simultaneously yell or tweet that “#BlackLivesMatter while also singing, dancing and profiting from the celebration of Alexander Hamilton.” Clemente’s latter tweet received a grand total of 16 likes, and the petition has still not received the requisite 400 signatures.

Parsing through Twitter will show you that the hashtag took off to a very modest degree. And the limited traction it did gain can be attributed almost entirely to users talking about how senseless #CancelHamilton is.

Okay, the #CancelHamilton hashtag is fucking bULLSHIT y'all, literal horseshit. Y'all are really just gonna try and cancel a FUCKING BROADWAY SHOW by an actual genius, who cast minorities as most of the characters portrayed, just because Hamilton was linked to the slave trade?

(1)The fact that #cancelhamilton is a real thing should just show how insane cancel culture is. It’s a musical, not a history textbook. It’s well known that the founding fathers were no angels but damn people, it’s a rap musical.

Really interesting how quick White people are to #CancelHamilton —a show by a POC that has created jobs for scores of BIPOC artists—when we’ve let @PhantomBway, and its romanticization of sexual assault/gaslighting, run on Bway for 32 years, no problem.

Oh no. See that just won’t work. You’re either perfect, as everyone who lives in 2020 is, or you’re cancelled. Your play must be shut down. #CancelHamilton https://t.co/WREZSfu6T8

I’m sure a small number of people do agree with Clemente that Hamilton should be thrown in the dustbin of history. And some historians have accused the real Hamilton of being complicit in the slave system, even though he expressed opposition to slavery, never owned any slaves himself, and disputed the idea that blacks were genetically inferior to whites.

But such critics miss the poetic justice in how Lin-Manuel Miranda framed his musical, with the plot centering on Hamilton, who is hardly the most famous of the Founding Fathers. Indeed, who pictures Hamilton as the lead role in the American Revolution?

Miranda did, and it was no accident. The orphan immigrant from the West Indies, the antislavery advocate, is the founder we need for this moment, Miranda implies, a poignant reminder that such underdogs don’t always get the bulkiest chapters in the history books.

It’s also notable that Miranda insisted on casting only actors of color in the musical. Seeing a black man portray Thomas Jefferson—someone who owned members of his own family—forces viewers to approach the past in a new way, to see how far the country has come. That subverting of history has allowed a new audience, who may previously have felt alienated by America’s birth story, to take part in it. (After opening in 2015, for example, Hamilton is already one of the highest-grossing musicals of all time.)

Where we are right now is a murky place, as those sins and contradictions swell to the forefront of the national dialogue. But audiences can be comforted by the fact that Twitter is not real life. When it comes to Hamilton‘s immediate future, it appears it will live to see another day.

from Latest – Reason.com https://ift.tt/2VWZqXF
via IFTTT