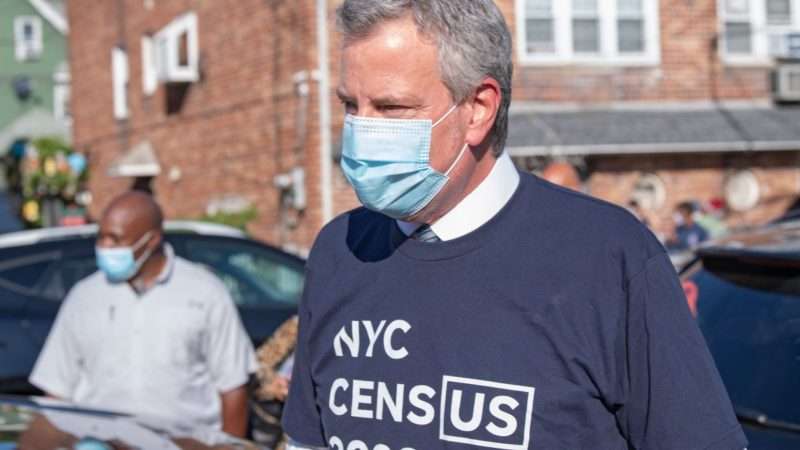 A spin of the coronavirus “Wheel of Perplexing Government Mandates” takes us to New York City, where, Mayor Bill de Blasio announced this morning, travelers from elsewhere will soon be greeted by quarantine checkpoints in all five boroughs.

The checkpoints are meant to enforce an order Democratic Gov. Andrew Cuomo signed in July. Cuomo’s order requires New York visitors hailing from 34 states and Puerto Rico to self-quarantine for 14 days. In a press conference this morning, de Blasio said that New York City will enforce the quarantine by stopping people who come into the city by way of major bridges and tunnels and reminding them that the self-quarantine is mandatory and violators face fines of up to $10,000.

New York City’s initial COVID-19 infection and death numbers were the worst in the U.S. and the world. The city has seen more than 23,000 people die from COVID-19, which is nearly 15 percent of all current pandemic deaths in the U.S. But the Big Apple now has a much better handle on managing the outbreak, having gone multiple days without any reported COVID-19-related deaths.

That improvement did not require checkpoints, and it’s not clear how checkpoints will help sustain it. For instance, New Jersey is not on the list of states whose residents must self-quarantine upon visiting New York. Given the traffic between the two states, this makes logistical and economic sense. But it doesn’t make pandemic sense. New Jersey is seeing a spike in new cases and has recorded 185,000 infections and nearly 16,000 deaths. Yet a visitor from the Garden State will not have to self-quarantine, while a visitor flying in from North Dakota (which has had about 7,000 cases and 111 deaths total) will have to self-quarantine.

Details on the new checkpoints are scarce. Reporting from the New York Daily News suggests their purpose is largely informational:

The city sheriff said most of the traffic stops would be done on a randomized basis, perhaps stopping one in every six or eight cars. He said the stops would not target out of state drivers because the law also applies to New Yorkers who travel to one of the states on the list.

He also suggested that no more than 20 officers might be enforcing the checkpoints citywide at any given time, a total that would likely make them less visible and widespread than the mayor implied.

De Blasio stressed that travelers’ civil liberties would be respected and the main purpose of the checkpoints would be to enforce and give information about the quarantine requirements, along with assistance to those who need it.

Much like the security theater at American airports, di Blasio’s coronavirus checkpoints are mostly for show. (Let’s just hope the sheriff’s department officials who operate the checkpoints are at least wearing masks.)

Meanwhile, a policy that has proven to be effective in other parts of the world is not working very well at all in New York City. According to The New York Times, the city’s contact-tracing efforts, which launched in June, have been a mess. New York City has hired 3,000 contact tracers, but de Blasio abruptly shifted responsibility for the initiative from the city health department (which had 50 employees who do this for a living already) to the city public hospital agency, which had no experience with it at all.

So far, less than half of all infected people in New York City have been able to provide contract tracers with the names of anybody they may have exposed, according to the Times. That’s not nearly enough to be effective, according to experts.

Instead, the contact-tracing program sounds a lot like every other work effort put together by a government agency: a bureaucratic mess with misguided priorities. The Times reports:

They spoke of a confusing training regimen and priorities, and of newly hired supervisors who were unable to provide guidance. They said computer problems had sometimes caused patient records to disappear. And they said their performances were being tracked by call-center-style “adherence scores” that monitor the length of coffee breaks but did not account for how well tracers were building trust with clients. …

“It reminds me of an Amazon warehouse or something, where we are judged more on call volume or case volume than the quality of conversations,” one newly hired contact tracer, a public health graduate student, said in an interview.

“To me, it seems like they hired all of us just to say we have 3,000 contact tracers so we can start opening up again, and they don’t really care about the program metrics or whether it’s a successful program,” she said.

from Latest – Reason.com https://ift.tt/33tgYz5
via IFTTT