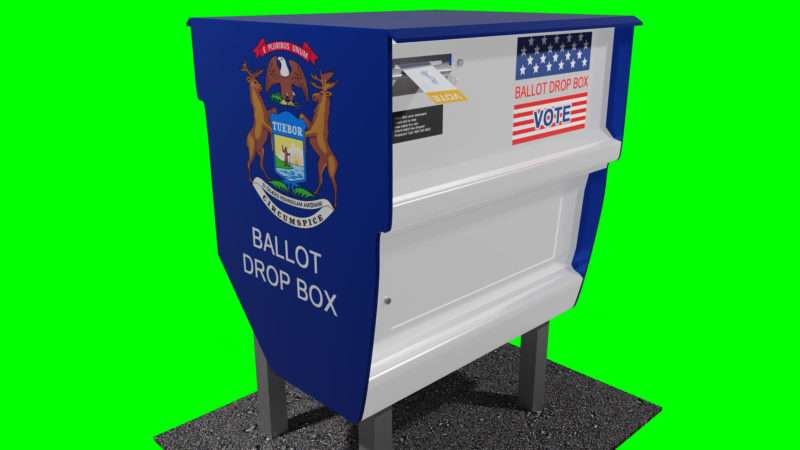 It’s common in a democracy to worry that you’ll have to make peace with unpalatable election results. What’s new this year is the possibility that many Americans might refuse to make peace at all. It’s the logical extension of a moment in which the major presidential candidates seem to have been picked for their ability to accurately represent the pathetic conditions of their parties, the partisans of those parties agree on little other than mutual contempt, and the government over which they’re scrapping has become so intrusive and punitive that nobody can afford to lose control.

President Trump raised eyebrows last month when, asked whether he’d accept a loss in the presidential election, he refused to commit. “No, I’m not going to just say yes. I’m not going to say no,” Trump told Fox News’s Chris Wallace.

“I think mail-in voting is going to rig the election,” the president added, in his ongoing effort to cast doubt on the results of remote voting.

It would be nice to be able to treat Trump’s ambivalence about election results as an aberration, but it’s actually a continuation of the attitude he held during the 2016 election that he ultimately won. More importantly, Trump’s maybe-I will, maybe-I-won’t take on swallowing unwelcome election outcomes is shared by much of the American public.

“Our data shows that partisans are quite open to their preferred presidential candidate rejecting the legitimacy of the election if they claim credible evidence of illegal voting or foreign interference,” reports the Democracy Fund Voter Study Group, a collaboration of analysts and scholars trying to get a handle on the evolving state of American politics.

“About three in 10 (29 percent) Republicans say it would be appropriate for President Trump to refuse to leave office because he claims that he has credible evidence of illegal voting,” the study group notes. “On the other hand, 57 percent of Democrats say that it would be appropriate for a Democratic candidate to call for a do-over election because they claim to have credible evidence of interference by a foreign government.”

Let’s emphasize the word “claim” in both of those scenarios. As the study group points out, “there is ample historical precedent for candidates to mislead the public about potential election interference in order to rally supporters against an electoral outcome with limited or no evidence.”

It’s also worth noting here that, despite justifiable concern about Trump’s respect for election outcomes and disturbing support among Republicans for him refusing to leave office if he makes claims of illegal voting, this poll finds even weaker respect for election results among Democrats. Not only would a majority favor a “do-over” in case of claims of foreign interference, but “38 percent of Democrats say it would be appropriate for a candidate to call for a do-over if they win the popular vote but lose the Electoral College.” That’s an outcome that is perfectly constitutional and has put several presidents—including the current one—in office.

Also concerning is that just over 20 percent of both Democratic and Republican respondents believe violence is at least somewhat justified if their side loses the election. That’s up from the 5 to 15 percent open to political violence in an earlier study by Nathan Kalmoe and Lilliana Mason, who also participate in the Democracy Fund Voter Study Group.

This all makes horrible sense in the context of a country largely divided into political factions that despise one another. Poll after poll finds that Democrats consider Republicans to be immoral, closed-minded, and racist. Republicans regard Democrats as immoral, unpatriotic, and socialist.

“The level of division and animosity – including negative sentiments among partisans toward the members of the opposing party – has only deepened” since 2016, according to Pew Research.

While partisans of the two major political parties really do agree on less by the year, they also work from distorted conceptions of who their opponents are and what they want. That’s hardly a shocker with many people concentrated in communities dominated by one point of view and intolerant of dissent.

“It’s hard to know exactly what’s going on,” commented Amanda Ripley, Rekha Tenjarla, and Angela Y. He in a 2019 piece for The Atlantic on the geography of partisan prejudice. “But what’s clear is that both sides are becoming more hostile toward one another.”

Perhaps unsurprisingly, American participation in politics is now driven less by loyalty to one’s own side than by animosity toward the opposition.

Then again, rallying around your own party is a bit of a challenge when the standard-bearers show evidence of having been selected on a dare. Whatever the reality of their fitness to hold office, the two septuagenarian presidential hopefuls have taken to accusing each other of senility in what Politico calls “the dementia campaign.”

“Biden can’t put two sentences together,” Trump says of Biden. “They wheel him out. He goes up—he repeats—they ask him questions. He reads a teleprompter and then he goes back into his basement.”

It would be less sad if there was anybody in the country who would be the least bit surprised if it turned out that both major candidates are a little wobbly in terms of their mental faculties. And those are the leading contenders for the White House in a country struggling with a pandemic and with the economic devastation wrought by social distancing and especially by mandated limits on economic and other activity.

Those limits, arbitrarily defining “essential” businesses that can remain open and others that must close, restricting travel, imposing quarantines, mandating mask-wearing, and barring cross-border movements reach further into people’s lives than we’ve seen in living memory. Whether motivated by sincere public health concern, panic, or vindictiveness toward disfavored segments of society, they involved exercises of vast and dangerous authority over people’s lives.

They also breed stresses which contribute to the recent eruptions of protest and violence in reaction to decades of abusive, biased, and militarized policing. Those protests have yet to subside, and the issues they address as well as the divisions they represent are sure to play a large role as the election approaches.

And those elections may well be a hot mess. While the president exaggerates the potential for expanded fraud in mail-in elections—most Arizonans have voted by mail for years with little difficulty—learning curves seem to be especially steep for government officials. New York turned its June primary into a contentious train wreck through inexperience in dealing with mailed ballots. That might be an opportunity for Trump to push his claim that “mail-in voting is going to rig the election.”

Or maybe the Democrats will point their fingers, again, at Russia.

Whatever happens, there’s a good chance the election in November won’t resolve very much at all.

from Latest – Reason.com https://ift.tt/2XypJnI
via IFTTT