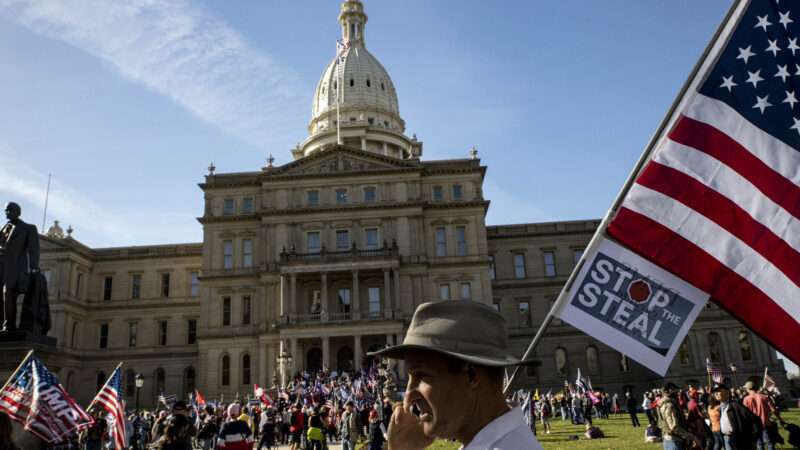 It wasn’t blowhards on cable news, Twitterati members of the “Resistance,” or protesters marching in the streets who ultimately prevented President Donald Trump and his Republican abettors from stealing the 2020 election.

It was people like Aaron Van Langevelde, a Republican member of the Michigan Board of State Canvassers, the four-member body responsible for certifying election results. With the other Republican on the board abstaining from Monday’s vote to certify the presidential election in Michigan—a maneuver that Trump’s legal team and state Republican officials were hoping would keep the outcome of the election an open question—Van Langevelde did the right thing. He acknowledged reality and voted to certify that Biden had won the state of Michigan by about 154,000 votes.

Van Langevelde is, deservingly, the hero of a must-read, deeply reported piece from Politico‘s Tim Alberta, who has emerged as one of the best chroniclers of the Republican Party’s Trumpist takeover.

In the end, it wasn’t a senator or a judge or a general who stood up to the leader of the free world. There was no dramatic, made-for-Hollywood collision of cosmic egos. Rather, the death knell of Trump’s presidency was sounded by a baby-faced lawyer, looking over his glasses on a grainy Zoom feed on a gloomy Monday afternoon, reading from a statement that reflected a courage and moral clarity that has gone AWOL from his party, pleading with the tens of thousands of people watching online to understand that some lines can never be uncrossed.

“We must not attempt to exercise power we simply don’t have,” declared Van Langevelde, a member of Michigan’s board of state canvassers, the ministerial body with sole authority to make official Joe Biden’s victory over Trump. “As John Adams once said, ‘We are a government of laws, not men.’ This board needs to adhere to that principle here today. This board must do its part to uphold the rule of law and comply with our legal duty to certify this election.”

A few hours after Michigan certified its results, the federal General Services Administration announced the start of the official transition process. Later on Monday night, Trump tweeted that such steps were “in the best interest of our country”—probably the closest thing to a concession Biden will get.

Van Langevelde did his duty, and even the most powerful man in the world couldn’t stand in the way.

That’s been one of the silver linings to emerge from the unprecedented (at least in recent history) stress test of American democracy that was the 2020 election. The combination of Trump and the COVID-19 pandemic could have been a disaster, but the country avoided the worst-case scenarios in part because enough civic-minded people stepped up to the plate and put their partisan preferences aside.

In Georgia, for example, there was Republican Secretary of State Brad Raffensperger, who refused to give any oxygen to Trump’s claims of voter fraud. Raffensperger stood firm even as Trump attacked him personally and other prominent Republicans called for him to resign from his job because he was doing his job.

“After any election, half of the voters will be happy and the other half will be disappointed. But I wanted to make sure everyone felt confident in the process and confident in the outcome,” Raffensperger wrote in an op-ed published Wednesday by USA Today. “In times of uncertainty, when the integrity of our political system is most at risk, the integrity of our politicians is paramount.”

Without Van Langevelde and Raffensperger, Trump’s scheme probably would have failed anyway. His top legal team produced the Four Seasons Total Landscaping debacle and pushed a bunch of nutty conspiracy theories to “explain” how the election was “stolen” from Trump, but their myriad lawsuits were rejected by judge after judge.

With the courthouse strategy failing miserably, Trump’s only hope was a statehouse strategy—one that would have required Republican lawmakers and election officials in several states to reject their duties to the Constitution and substitute them with fealty to Trump by refusing to certify results. If the Michigan State Board of Canvassers had been unable to certify the state’s results—which would have happened if Van Langevelde had joined his fellow Republican in refusing to vote on Monday—then certification of the outcome would have fallen to the Republican-controlled state legislature. Blocking certifications in enough states to change the outcome of the race was never anything more than an extreme long shot, but Van Langevelde ensured it wouldn’t happen.

Still, the attempt to subvert the results of the election matter. The Republican officials who went along with the plot—including some of the highest-ranking Republicans in Michigan—ought to be ashamed and booted from their positions of authority. Republicans should root out anyone who has attempted to undermine the public’s trust in elections with the same fervor they apply to stopping voter fraud. The stakes are the same, and the threats to the system revealed by the 2020 election will not vanish on January 20.

America never got to the very edge of the precipice in the weeks after the 2020 election. But for a little while, the country was staggering in that direction. Thank the Van Langeveldes and Raffenspergers of the country for doing the right thing and steering the country away from the edge.

from Latest – Reason.com https://ift.tt/3fwmOUy
via IFTTT