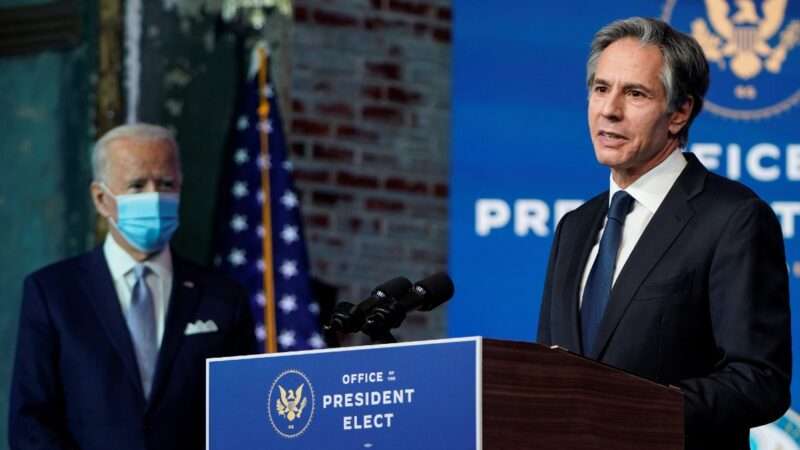 President-elect Joe Biden’s selection for secretary of defense is rumored but, as of this writing, yet undetermined. The rest of his national security team, however, has been announced ahead of every other slate of cabinet-level nods. For secretary of state, Antony Blinken; for United Nations ambassador, Linda Thomas-Greenfield; for national security adviser, Jake Sullivan; for director of national intelligence, Avril Haines; and for director of homeland security, Alejandro Mayorkas.

It is a list which delivers on Biden’s core campaign promise of a return to normalcy and conventional Washington.

The trouble is that this conventionality isn’t only a matter of style, which in isolation is plenty welcome. The Biden national security team is shaping up for a thoroughgoing conventionality on policy, too, which means maintaining the failed status quo of the post-9/11 era.

Take Blinken, an old school upper crust diplomat who will undoubtedly be far more interested in actual diplomacy than sitting Secretary of State Mike Pompeo has ever been. Blinken supported the development of the Iran nuclear deal and will likely spearhead the Biden administration’s move to jettison the Trump team’s disastrous “maximum pressure” approach to U.S.-Iran relations and rejoin the Joint Comprehensive Plan of Action. So far, so good.

But Blinken is also fundamentally an interventionist who has yet to learn that the U.S. cannot manage the planet. In his remarks accepting Biden’s nomination, he rightly noted Washington “can’t solve all the world’s problems alone”—but then, he went on to suggest our government can solve all the world’s problems if only it partners with other governments.

Thus did Blinken support U.S. military action in Libya, Yemen, and Syria. And though he has since regretted the Yemen call, he believes the mistake in Syria was a failure to escalate. He has even attempted to rebrand Biden’s 2002 vote to invade Iraq as a “vote for tough diplomacy.” It was a vote for war—and after nearly two decades, tens of thousands of casualties, and trillions of dollars, we might at least be spared drivel about how endorsing a war is somehow a move for diplomacy.

Thomas-Greenfield may provide some counterbalance to that oddly military-focused mindset in a top diplomat. After 9/11, she recently wrote in a coauthored article at Foreign Affairs, the State Department became “too narrowly focused on terrorism and too wrapped up in magical thinking about the United States’ supposed power to transform regions and societies.” Thomas-Greenfield’s call there for “greater restraint and discipline” in U.S. foreign policy should be heeded, but whether the U.N. ambassador is able to influence policy (vs. simply communicating it) has varied widely in administrations past.

Next is Sullivan, who also worked on the Iran deal. He was an architect of the Libya debacle when he served under then-Secretary of State Hillary Clinton, a role in which he developed a reputation as a diligent, effective, and pleasant hawk. “On the spectrum of people in our administration, he tended to favor more assertive U.S. engagement” and “responses that would incorporate some military element,” Obama adviser Ben Rhodes told Vox of Sullivan in 2015.

Haines for director of national intelligence is a thoroughly establishment choice. She helped build the Obama administration’s drone warfare program—”Haines was sometimes summoned in the middle of the night to weigh in on whether a suspected terrorist could be lawfully incinerated by a drone strike,” Newsweek reported in 2013. (In 2012, a New York Times exposé revealed the Obama team maintained a secret drone “kill list” and counted “all military-age males in a strike zone as combatants,” allowing deceptively low civilian casualty counts.) Haines also supported the Trump administration choice for CIA director of Gina Haspel, who helped lead the CIA unit involved in Bush-era torture.

The final name on the list is Mayorkas at the Department of Homeland Security (DHS). His work to normalize U.S.-Cuba relations during the Obama years is an interesting history and could portend diplomatic progress to come in other antagonistic relationships, like U.S.-Iran or U.S.-North Korea engagement, insofar as DHS is involved. Mayorkas is expected to revive the DHS focus on counter-terror work (which faded into the background of the Trump administration’s attention to immigration), but his record is in prosecution and immigration, so it’s not yet clear what that will mean for policy.

Beyond normalcy, Biden has campaigned on most (though not all) foreign policy issues as a relative moderate, a liberal internationalist who has learned from the mistakes of the last 20 years. He’s said he’ll “end the forever wars,” and govern from the conviction that “use of force should be our last resort, not our first—used only to defend our vital interests, when the objective is clear and achievable, and with the informed consent of the American people.”

Unfortunately, on balance, these appointments will make it difficult for Biden to keep that promise.

from Latest – Reason.com https://ift.tt/2VBUdnL
via IFTTT