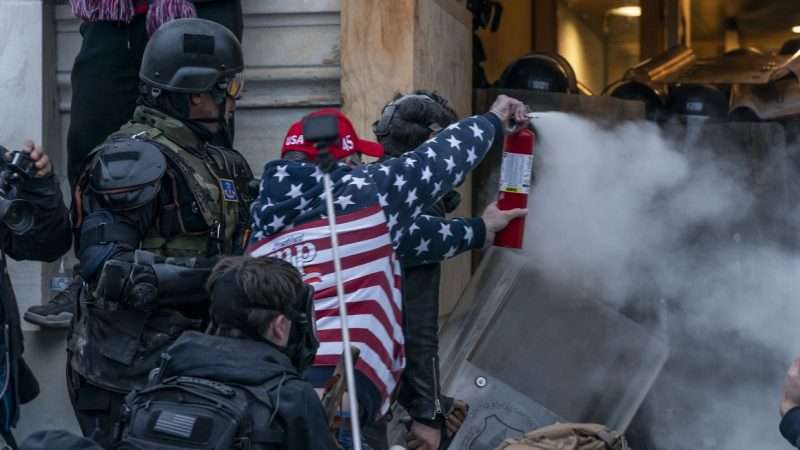 Civil rights groups across the country are urging President Joe Biden and Vice President Kamala Harris, as well as Congressional Democrats, not to pass new laws to address any potential threats from white nationalists emboldened by and loyal to former President Donald Trump.

In a letter dated Tuesday, 135 civil rights organizations—ranging from religious groups, immigration advocates, and LGBT organizations, to the American Civil Liberties Union and the National Association for the Advancement of Colored People—expressed their concerns about calls to pass new criminal laws in the wake of the riot and temporary invasion of the U.S. Capitol by Trump supporters:

The Justice Department (DOJ), including the Federal Bureau of Investigation (FBI), has over 50 terrorism-related statutes it can use to investigate and prosecute criminal conduct, including white supremacist violence, as well as dozens of other federal statutes relating to hate crimes, organized crime, and violent crimes. The failure to confront and hold accountable white nationalist violence is not a question of not having appropriate tools to employ, but a failure to use those on hand. To date, DOJ has simply decided as a matter of policy and practice not to prioritize white nationalist crimes.

The letter is necessary because Biden and his administration came into the White House already planning to focus on domestic terrorism, and one possibility the transition team was mulling over is the Confronting Threats of Domestic Terrorism Act, H.R. 4192, which was introduced in 2019 by Rep. Adam Schiff (D–Calif.).

The act establishes new offenses whenever somebody commits a violent crime “with the intent to intimidate or coerce a civilian population, influence the policy of a government by intimidation or coercion, or affect the conduct of a government….” The law covers crimes like kidnapping, murder, and assault with a dangerous weapon, as well as property damage that “creates a substantial risk of serious bodily injury to any other person.”

The signatories on the letter know exactly where this kind of legislating leads. We literally just said goodbye to a president who ordered the Department of Justice to use every federal law they could against Antifa protesters. The letter observes:

These bills and others with similar provisions are the wrong approach because, as we have seen, they will continue to be used as vehicles to target black and brown communities as they have done since their inception. The federal government has no shortage of counterterrorism powers, and these powers have been and will be again used to unjustly target black and brown communities, including Muslim, Arab, Middle Eastern, and South Asian communities, as well as those engaged in First Amendment-protected activities. The creation of a new federal domestic terrorism crime ignores this reality and would not address the scourge of white nationalism in this country.

The letter writers are not without congressional allies. Rep. Rashida Tlaib (D–Mich.) sent a lengthy letter of her own to congressional leaders, co-signed by nine other Democrats in the House (including New York Rep. Alexandria Ocasio-Cortez), warning that the federal government’s national security powers should not be expanded. Tlaib writes in part:

While many may find comfort in the increased national security powers in the wake of this attack, we must emphasize that we have been here before and we have seen where that road leads. Our history is littered with examples of initiatives sold as being necessary to fight extremism that quickly devolve into tools used for the mass violation of the human and civil rights of the American people… .

I took note yesterday that following the Sept. 11 attacks, many of the new authorities the federal government granted itself in order to fight terrorism ended up actually being used to surveil on and track Americans through NSA records collections and Department of Homeland Security Fusion Centers. While it is a relief that many people with connections to the incoming majority see the danger of expanding federal policing authority, Biden has a lengthy history of support for harsh enforcement. We’ll see if he has truly changed his ways and come around on criminal justice reforms based on what he does here.

from Latest – Reason.com https://ift.tt/2Y0xq5X
via IFTTT