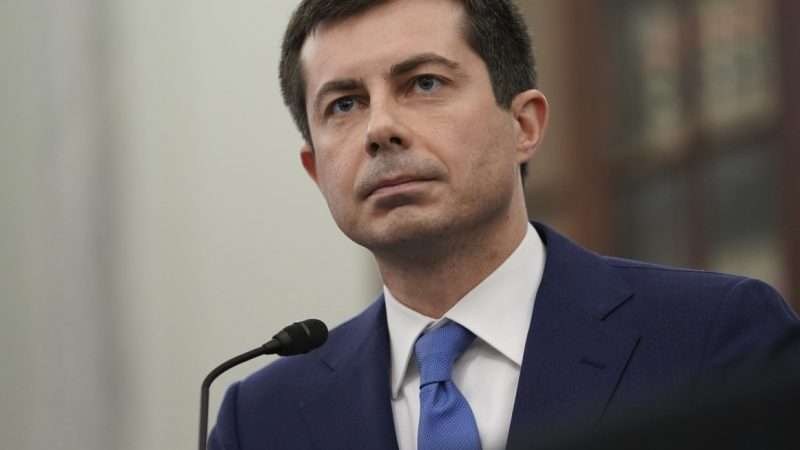 President Joe Biden may have said on the campaign trail that Puerto Rico should become a state, but that doesn’t mean he supports laws that make it a viable, economically competitive state if doing so means angering maritime unions.

In an executive order signed Monday and in subsequent comments, Biden made it abundantly clear that he supports the Jones Act, a 1920 federal law that requires that cargo ships traveling between American ports be made in America and owned and crewed by American citizens:

The executive action I am taking also reiterates my strong support for the Jones Act and American vessels, you know, and our ports, especially those important for America’s clean energy future and the development of offshore renewable energy.

The Jones Act is an absolutely terrible law, designed purely for protectionist measures, that shields maritime companies and unions in the United States from competition. The consequence of the Jones Act is that a foreign commerce ship that goes to states like Hawaii or Alaska or to territories like Puerto Rico can stop in only one consecutive American port. It cannot travel to other American ports unless it goes to a foreign port and then returns. A vessel from Japan that’s heading to Los Angeles cannot also stop in Hawaii along the way and engage in commerce, despite the logical economic efficiencies in doing so.

Supporters of the Jones Act insist that these protections are necessary to sustain American jobs and to maintain a viable shipping industry. But those arguments are not supported by the data. In reality, as researchers with the Cato Institute have found, American shipyards have been in a long decline as a result, and most of the ships we build are almost entirely for use in our own waters. It’s cheaper to build large vessels overseas than in America, but since they cannot operate in America due to the Jones Act’s requirement, U.S. shipping companies can’t buy them.

The end result for the shipping industry has been completely backward. America produces fewer ships, by weight, than much smaller countries like Italy and Germany. It also hamstrings American competitiveness in international shipping because it costs more to operate U.S. vessels than their foreign counterparts.

The end result of this restrictive law is that only two percent of U.S. freight is transported by sea, despite our long coasts, our many ports, and island states and territories. It’s in part why we have to depend so much on trucks and trains for transporting goods, even along coastal regions. Cato notes that internal shipping is about half the volume it was in 1960, while rail and truck commerce both saw dramatic increases.

Nowhere are the burdens of the Jones Act more apparent than in places like Hawaii and Puerto Rico. These restrictions distort market forces and significantly drive up the costs to transport goods to these places. The New York Fed calculated that it can cost twice as much to ship something from the American mainland to Puerto Rico as it does to nearby island nations like Jamaica. Puerto Rico actually imports jet fuel from other countries rather than the Gulf Coast because it’s just too expensive to get Jones Act-compliant vessels.

There’s no need to exaggerate the impact of the Jones Act on domestic transport costs because whenever a disaster comes around, like Hurricane Maria in Puerto Rico in 2017, the government will temporarily waive the Jones Act’s requirements so that the costs of recovery aren’t quite as back-breaking.

But even as the Jones Act actually punishes Americans, reducing our economic competitiveness in the world market and driving up the costs we pay for goods, the few people who gain from it have the government’s ear, and, of course, are significant political donors. The citizens of Puerto Rico and Hawaii cannot compete with what the Cato Institute describes:

Among the obstacles to Jones Act reform is the complex web of special interests that benefit from preservation of the status quo. Among Jones Act supporters are U.S. shipbuilders, merchant mariners, various maritime unions, and those who actually believe the law is essential to national security. Meanwhile, there are no fewer than 6 federal agencies and 16 congressional committees with Jones Act enforcement and oversight authorities.

Former South Bend Mayor Pete Buttigieg, Biden’s pick for Secretary of Transportation, has also affirmed that he supports the Jones Act, despite the law’s role in pushing more and more commercial transportation onto highways, making a mockery of the alleged aims of the administration to focus on fighting climate change in its transportation policies.

As long as the Jones Act remains intact, all of this Democratic posturing toward making Puerto Rico a state and giving it more representation is all about entrenching the power of the Democratic Party by adding some seats to Congress that are likely to go to Democrats. By keeping the Jones Act intact, Biden, Buttigieg, and company show very little interest in actually improving the economic livelihoods of people in Puerto Rico.

Black and brown neighborhoods have been disproportionately divided by highway projects or left isolated by the lack of adequate transit and transportation resources.

In the Biden-Harris administration, we will make righting these wrongs an imperative.

How does that statement possibly square with support of the Jones Act, which hits the minority populations of Puerto Rico and Hawaii particularly hard and increases our dependency on highways for commercial transportation? It does not.

from Latest – Reason.com https://ift.tt/2MspmZt
via IFTTT