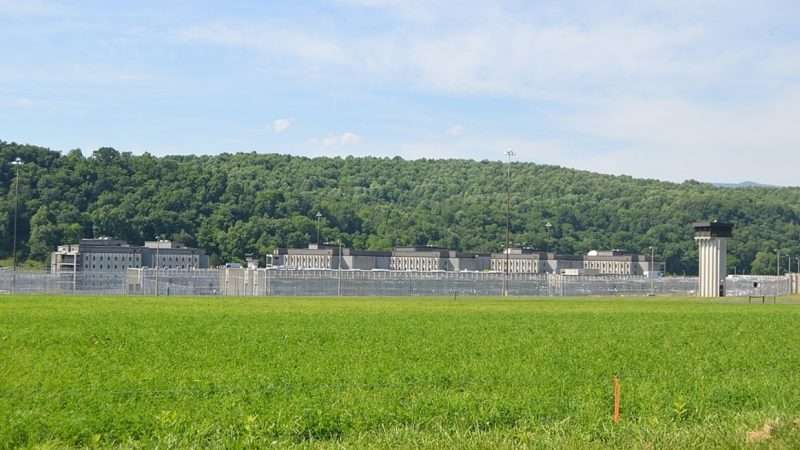 Their search yielded no drugs, and Calloway has not returned to the prison since.

A federal court ruled last week that the guards involved in that invasive search did not violate the Fourth Amendment, simultaneously upholding a lower court ruling that awarded qualified immunity to the government employees. Calloway will thus not be permitted to sue over the incident.

“[T]he standard under the Fourth Amendment for conducting a strip search of a prison visitor—an exceedingly personal invasion of privacy—is whether prison officials have a reasonable suspicion” to believe such a search is necessary, writes Judge Paul V. Niemeyer of the U.S. Court of Appeals for the Fourth Circuit. In Calloway’s case, that included the following: an unidentified inmate said two days prior that Talbert was “moving” contraband; a guard saw Calloway briefly touch her pants; that same guard had twice previously identified contraband smugglers.

After briefly meeting with Talbert in the visitation room, Calloway was removed by the guards and given the news. One officer “indicated that if Calloway did not consent to a strip search, she would not be permitted to come back to the prison,” notes Niemeyer. According to Calloway, she was “bawling crying and didn’t understand what was going on.”

In order to successfully overcome a qualified immunity defense, plaintiffs must clear two hurdles: They must prove that their constitutional rights were indeed violated and that such a violation has been “clearly established” in previous case law. In other words, a court may rule that the defendant unequivocally infringed on someone’s civil rights while subsequently taking away a victim’s right to sue—if the alleged misbehavior has not yet been outlined in a prior decision. Two officers in Fresno, California, for example, were afforded qualified immunity after stealing $225,000, because the U.S. Court of Appeals for the Ninth Circuit could not pinpoint a court precedent saying that it is unconstitutional for cops to steal.

But the Fourth Circuit did not clear Calloway on even the first prong, something that Judge James A. Wynn took issue with in a lengthy dissent.

“[V]iewing the evidence in a light most favorable to Ms. Calloway shows that the officers’ lacked justification for initiating the search,” he writes.

Such a personally humiliating exercise requires more “individualized, particularized information,” he argues. Wynn cites Leverette v. Bell (2001): “‘Courts examining the constitutionality of physically intrusive searches have distinguished between strip searches, visual body cavity searches, and manual body cavity searches,'” he quotes. “Unquestionably, the search of Ms. Calloway’s body—which included a visual inspection of her anal cavity and an order to remove her tampon from her vagina in front of two officers and place her used tampon in an officer’s hand for inspection—was an intrusive search, more like a visual body cavity search than a standard strip search.” The same precedent holds that a prison visitor “does not forfeit all privacy rights” when he or she enters.

That addresses the first qualified immunity prong. What about the second?

“The majority wisely does not address the qualified immunity analysis beyond concluding the search was supported by reasonable suspicion,” Wynn writes. “But even if the majority were to reach qualified immunity, I believe the right of prison visitors to be free from strip searches absent reasonable suspicion was clearly established at the time of this search.” He again cites Leverette, which requires that a visual body cavity search be accompanied by such suspicion.

Calloway brought her claim under the Civil Rights Act of 1871, the landmark law that allows citizens to sue for civil rights violations. The law provides (or is supposed to provide) the American public with appropriate recourse when state actors deny them their rights.

But the jurisprudence around the legislation, also known as Section 1983, often results in the direct opposite. That’s particularly relevant with the addition qualified immunity—an imaginative doctrine that the Supreme Court concocted out of thin air. Deference goes to the state, not to the victim.

“The question is whether—viewing the evidence in the light most favorable to Ms. Calloway—a reasonable jury could conclude the search was not supported by the individualized, particularized information required by the Fourth Amendment,” Wynn writes. Unfortunately for Calloway, she will not have the privilege to find out.

from Latest – Reason.com https://ift.tt/3pBCsSw
via IFTTT