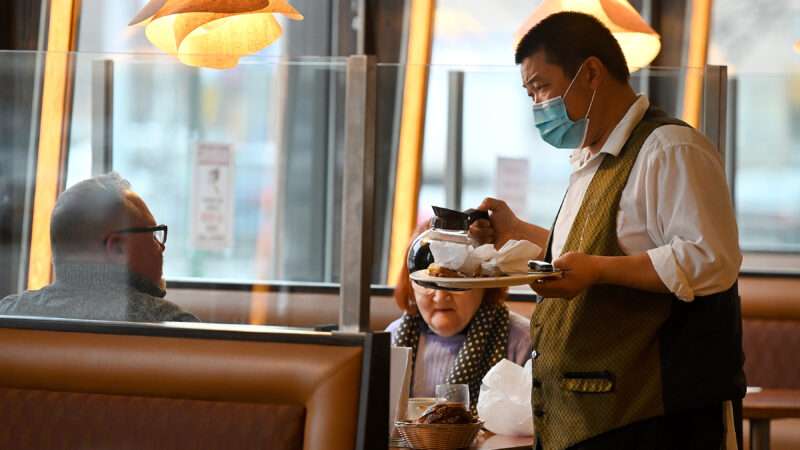 The American restaurant industry continues to hemorrhage money as local governments around the U.S. restrict indoor dining options in order to keep COVID-19 cases at bay. With other parts of the economy still lagging and many Americans still unemployed, Congressional Democrats want to pass another large COVID-19 relief package.

Except this time, Democrats want to provide that relief by doubling the federal minimum wage from $7.25 an hour to $15 an hour. As part of that effort, Democrats also want to completely eliminate the tipped minimum wage—a lower hourly rate paid to certain workers in the hospitality industry. The federal tipped minimum wage is currently $2.13 an hour and many workers who receive it make up the difference (and then some) with tips from customers. The COVID-19 relief bill could raise that amount to $15 an hour.

As I wrote last month, the Democrats’ latest spending effort would likely require many of the bill’s intended recipients to seek relief from the relief. Though some employees may see a bump in pay, others would lose their jobs entirely. In a recent report, the Congressional Budget Office estimated that raising the minimum wage to $15 an hour would lift 900,000 people out of poverty while pushing 1.4 million people out of work.

That effect would arguably be even more pronounced in the restaurant industry, which would see labor costs increase up to 700 percent, as opposed to the mere 200 percent faced by businesses whose employees already make $7.25 an hour. (If tipped-wage workers are not able to pull in the equivalent of the full federal minimum wage, employers are already required by law to make up the difference.)

In good times, the restaurant industry operates on profit margins of around 6 percent. But things aren’t normal right now. As of December, restaurant closures were up 32 percent year over year as businesses grapple with COVID-19 restrictions that have hamstrung their operations, particularly for eateries in downtown areas that rely on tourists and office workers for business.

This debate isn’t new. An example: In the summer of 2018, voters in Washington, D.C., passed Initiative 77, a measure that axed the tipped minimum wage. It drew a hearty backlash from restaurant workers, who lobbied to have the measure overturned. (The D.C. Council obliged.)

New York City has not done away with its tipped wage entirely, but it has continued to increase it over time. After the city increased the tipped minimum to $10 an hour in 2019, hundreds of restaurants reported that they would have to cut employee hours, with just under half of respondents saying they would eliminate jobs entirely.

A bump in pay might sound nice—until you’re let go. A study conducted by researchers at Harvard Business School using data from Yelp concluded that “a one-dollar increase in the minimum wage leads to a 14 percent increase in the likelihood of exit for a 3.5-star restaurant.”

Some Democrats are skeptical of the proposal. “If the minimum wage provision is in the bill with the elimination of the tip credit, it would make it very hard for me to support it,” Sen. Angus King (I–Maine), who typically votes with Democrats, told The Wall Street Journal. “A lot of restaurants are just hanging on by the thread.”

Without King’s support, and without the backing of other moderates like Sens. Kyrsten Sinema (D–Ariz.) and Joe Manchin (D–W.Va.), it’s doubtful that Democrats will be able to muscle a massive minimum wage increase through budget reconciliation. But this debate could be coming to a city near you.

from Latest – Reason.com https://ift.tt/3kjmgnu
via IFTTT