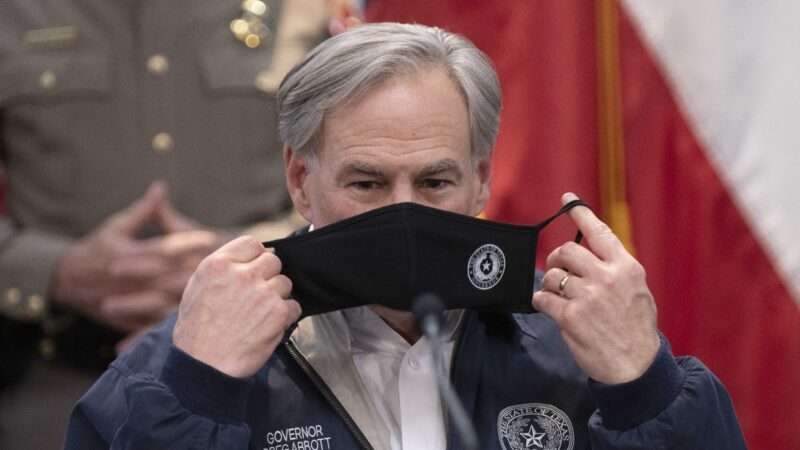 Texas Gov. Greg Abbott yesterday announced that he plans to lift his state’s remaining COVID-19 restrictions as of next Wednesday. The decision predictably provoked much criticism from Democrats, who argue that the Republican governor is inviting a surge in cases and deaths by acting precipitously.

“What Abbott is doing is extraordinarily dangerous,” said Gilberto Hinojosa, chairman of the Texas Democratic Party. “This will kill Texans. Our country’s infectious-disease specialists have warned that we should not put our guard down, even as we make progress towards vaccinations. Abbott doesn’t care.” There are several reasons to be skeptical of such warnings, starting with the details of what will actually change as a result of Abbott’s new order.

Most businesses in Texas have been allowed to operate at 75 percent of capacity since October 14, when Abbott also allowed bars to reopen. As of March 10, the occupancy limit will be removed. It seems unlikely that such a change will have much of an impact on the risk of virus transmission, even in businesses that were frequently hitting the 75 percent limit.

In counties with “high hospitalizations,” meaning that COVID-19 patients account for more than 15 percent of hospital capacity, local officials will be allowed to enforce occupancy limits on businesses, provided the cap is no lower than 50 percent. That is the limit Abbott had been imposing in such counties since mid-October.

Abbott is also lifting the state’s face mask requirement, which he imposed on July 2. While “individuals are strongly encouraged to wear face coverings over the nose and
mouth wherever it is not feasible to maintain six feet of social distancing from
another person not in the same household,” he says, “no person may be required by
any jurisdiction to wear or to mandate the wearing of a face covering.”

Businesses are still free to require face masks on their property. Their decisions will depend on how they weigh the fears of people who are keen to avoid infection against the resentment of people who don’t want to cover their faces. Reuters reports that Target and Macy’s, for example, will continue to require that their employees and customers in Texas wear face masks. Toyota and General Motors likewise said their policies will remain unchanged.

The Texas grocery store chain H-E-B, by contrast, says it will urge, but not require, customers to wear masks. Its employees will still have to wear masks. “Although there is no longer a statewide mask order, H-E-B believes it is important that masks be worn in public spaces until more Texans and our Partners have access to the Covid-19 vaccine,” the company said in a press release. The Randalls supermarket chain is likewise lifting its face mask requirement for customers, although it said “we will continue our health and safety measures such as enhanced cleaning and social distancing guidance.” The Kroger chain has not updated its policy yet but plans to do so.

The impact of eliminating the state requirement and any changes to business policies, of course, will depend on how many Texans prefer not to wear masks in public places. According to the latest University of Texas/Texas Tribune survey, “88% of the state’s voters”—including 98 percent of Democrats and 81 percent of Republicans—”wear masks when they’re in close contact with people outside of their households.”

Abbott’s critics note that Texas lags behind other states in vaccinating its population. But according to a New York Times tally, 13 percent of Texans have received at least one dose, which is about the same as the share of residents who are 65 or older. Vaccines are currently available to Texans in that age group, along with people who have certain preexisting health conditions that increase the danger posed by COVID-19.

Older people face a much higher risk of dying from COVID-19: According to estimates from the Centers for Disease Control and Prevention, the infection fatality rate for Americans older than 70 is something like 5.4 percent, compared to 0.5 percent for 50-to-69-year-olds, 0.02 percent for 20-to-49-year-olds, and 0.003 percent for people younger than 20. The fact that Texas already has distributed enough vaccines to cover most people who are 65 or older should substantially reduce any risk of additional deaths stemming from less use of face masks.

Texans in high-risk groups who have not yet been vaccinated would be well-advised to continue avoiding close interaction with people from other households, especially if those people are not wearing masks. At most, Abbott’s new policy might make that precaution marginally more difficult.

The same people who are predicting dire consequences from these changes also objected when Abbott lifted his statewide lockdown at the end of April. Yet newly identified cases in Texas did not start rising until mid-June. And while the state’s summer surge was bigger than the one seen in California, which has much stricter COVID-19 policies, the winter surge was steeper in California. The two states have seen similar declines in daily new cases since early-to-mid January, despite their starkly different approaches to the pandemic.

In Florida, the Times notes, “schools and businesses have been widely open for months.” Yet Florida also saw a sharp decline in newly identified infections around the same time that Texas and California did, as did the United States as a whole.

Some epidemiologists think that drop reflects the waning impact of infections associated with holiday gatherings, extra caution inspired by the winter surge, or some combination of the two. Marty Makary, a professor at the Johns Hopkins School of Medicine and Bloomberg School of Public Health, argues that we can thank increasingly wide natural immunity, including T-cell responses that are not detected by antibody tests.

Whichever interpretation you favor, variations in public policy do not seem to be an important part of the story. That is apt to be especially true when we are talking about relatively modest differences, such as changing the occupancy limit for businesses from 75 percent to 100 percent of capacity or telling people they are not legally required to wear masks when the vast majority of them think that precaution is sensible.

from Latest – Reason.com https://ift.tt/3kGv46V
via IFTTT