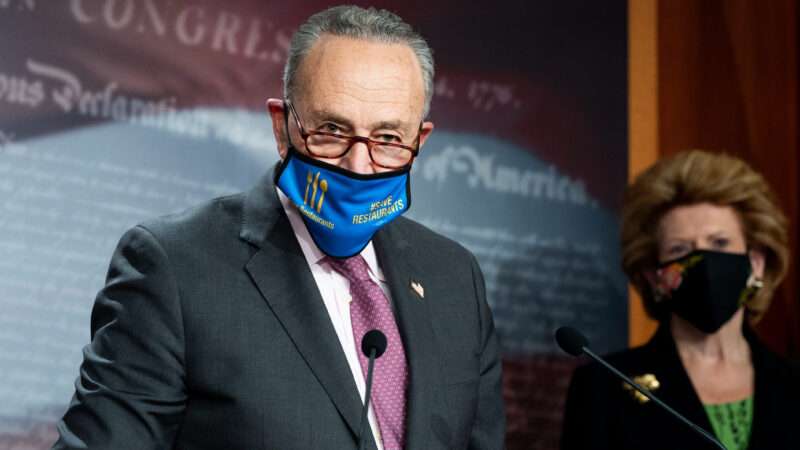 President Joe Biden and Senate Democratic leaders have agreed to a compromise version of their $1.9 trillion spending bill that modestly lowers the income ceiling for receiving a $1,400 relief check.

Single-filers making $75,000 a year would still get the full $1,400, reports the Associated Press, but that amount will fall to zero for individuals making $80,000 or more. Joint-filers earning up to $150,000 would also get the full check. Couples earning more than $160,000 would get nothing. The slightly more generous spending bill passed by the House earlier this week excludes single-filers earning $100,000 or more, and couples earning $200,000.

The changes, reports the Washington Post‘s Jeff Stein, would reduce the sticker price of the “relief” bill by about $12 billion.

The idea behind restricting the number of employed, six-figure earners getting government support is to shore up the support of Senate moderates. “I think it’s an appropriate way of bringing this to a successful conclusion,” Sen. Michael Bennett, one such moderate, (D–Colo.) told The Los Angeles Times.

Progressives, of the right- and left-wing variety, are less pleased with the changes, saying they deprive needed benefits from hard-working members of the upper-middle class.

“Amazes me that Democrats can find millions to shovel to abortion providers, millions for ‘environmental justice,’ billions for blue state bailouts—but they continue to water down direct relief to working people,” said Sen. Josh Hawley (R–Mo.) on Twitter.

“Further ‘targeting’ or ‘tightening’ eligibility means taking survival checks away from millions of families who got them last time,” Rep. Pramila Jayapal (D–Wash.), chair of the Congressional Progressive Caucus, told the Post earlier this week. “That’s bad policy and bad politics too.”

Fretting that families pulling down six-figure incomes will suffer if they don’t receive an additional $1,400 has been a mainstay of Democratic messaging on their spending bill.

“You know, [Biden] believes a married couple—let’s say they’re in Scranton, just for the sake of argument; one is working as a nurse, the other as a teacher—making $120,000 a year should get a check,” said White House Press Secretary Jen Psaki last month. “When one in seven American families don’t have enough food to eat, we need to make sure people get the relief they need and are not left behind.”

“The juxtaposition between families who do not have enough food as a category of people that Biden wants his stimulus to help and a two-earner family with a solid six-figure income is more than a little jarring,” wrote Reason‘s Peter Suderman at the time, noting that this hypothetical family isn’t missing meals for lack of government aid.

Indeed, one feature of the halting recovery from the pandemic is that higher-income earners have done pretty well. Employment rates of those earning $60,000 or more are actually a little higher now than they were at the beginning of 2020. Job opportunities for lower-income workers, many of who once had jobs in the forcibly shuttered retail and restaurant industries, have declined sharply.

The debate that moderates and populists are having over the income ceiling suggests that this is not actually a relief bill, but just an “American wish list,” as Sen. Chuck Schumer (D–N.Y.) described it today.

Democratic legislators, both moderate and progressive, are using COVID-19 as an excuse to push for spending priorities that have nothing to do with the pandemic. Government spending more than it absolutely must (and far more than it can claw back in taxes) will likely have serious fiscal consequences further down the road, particularly when added to the $4 trillion in pandemic-related spending already approved by Congress.

But who knows when that bill will come due? In the meantime, Congress is going to keep plucking that COVID chicken.

from Latest – Reason.com https://ift.tt/2OhCcuu
via IFTTT