Russia will reportedly start at-sea factory trials of a nuclear-powered unmanned underwater vehicle (UUV), also known as the Poseidon, sometime in the second half of 2019, a defense industry source told TASS.

“The successful tests of Poseidon’s nuclear-powered energy unit opened the way to conducting at-sea factory tests of the vehicle. The tests will begin in favorable weather conditions this summer,” the source said.

“A few days ago you informed be about completion of the key stage of trials of the unmanned multipurpose and strategic underwater combat vehicle Poseidon,” Putin was quoted as saying to Defense Minister Sergei Shoigu during a meeting.

Putin first unveiled the drone propelled by a miniaturized nuclear reactor at his state-of-the-nation address to both houses of the Russian parliament in March 2018.

“In his state-of-the-nation address to both houses of Russia’s parliament on March 1, Russian President Putin mentioned for the first time the country’s efforts to develop a nuclear-powered unmanned underwater vehicle that can carry both conventional and nuclear warheads and is capable of destroying enemy infrastructural facilities, aircraft carrier groups and other targets,” TASS said.

The Poseidon is a “new intercontinental, nuclear-armed, nuclear-powered, undersea autonomous torpedo,” according to the 2018 US Nuclear Posture Review. The drone is a weapon of last resort. It will also function as a deterrent against Western forces.

Based on a 2015 classified Russian presentation slide, accidentally broadcasted on Russian state-run television station, the drone can travel at speeds of up to 60 to 185 mph, with a range of 6,200 miles and a maximum depth of 3,300 ft. The drone is cloaked by stealth technology to elude acoustic tracking devices. Its size has been estimated at 5 ft. wide and 78 ft. long. It can be fitted with a thermonuclear warhead with a layer of cobalt-59 yielding 100 megatons. However, new reports suggest only a two-megaton warhead. 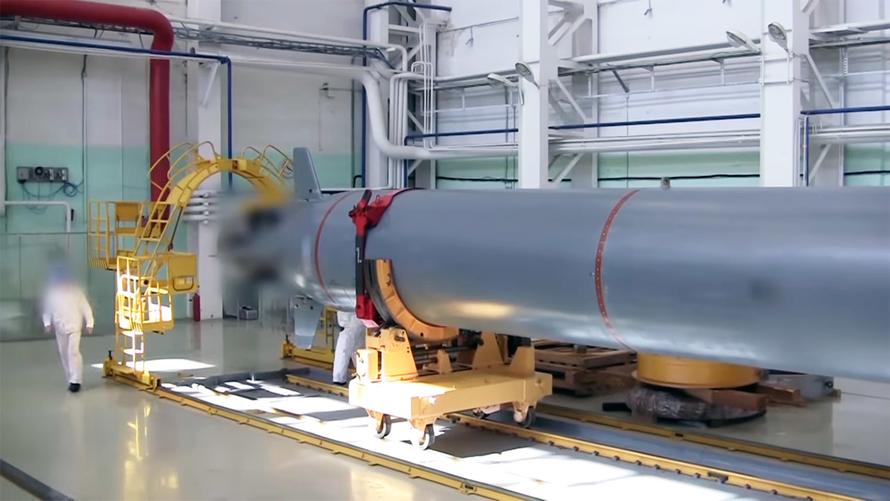 “Two Poseidon-carrying submarines are expected to enter service with the Northern Fleet and the other two will join the Pacific Fleet. Each of the submarines will carry a maximum of eight drones and, therefore, the total number of Poseidons on combat duty may reach 32 vehicles,” the source said.

The Poseidon is listed in Russia’s state armament program for 2018-2027, and the first drone is expected to deploy in the late 2020s. Each drone has the capability of destroying an entire Western naval base, a coastal city, and even a whole aircraft carrier battle group.