A nice compendium of UK economic data has recently appeared (h/t NESS). You are encouraged to download data sets for your own nefarious purposes.

As an example, I have decided to plot UK unemployment rate against the measure of confidence I proposed on these pages a couple of years ago. To recap, the confidence ratio is the ratio of outstanding public debt (in dollars) to the dollar value of the country's gold holdings. I chose "confidence" as presumably this ratio can only be high for a country in which investors have great confidence. For those of a different mindset, it can be viewed as a measure of a country's ruin (although it would be better to include other foreign currency reserves). 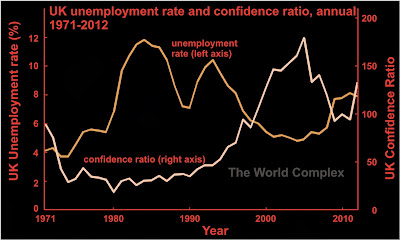 UK unemployment data from the site mentioned above. UK debt came from google public data. UK gold holdings came from the data sets available from the World Gold Council. To find the dollar value of gold holdings, I used averaged annual prices available at Kitco. Average conversion rate of GBP to USD available here (although I don't remember where I got it for the original posting, which was up to 2011).

That is a good-looking example of negative correlation. It tells us that the unemployment falls when the confidence ratio is high. Now, there are three ways for a government to increase that confidence ratio:

3) pray for the price of gold to fall (obviously in a non-manipulative manner that doesn't direct profits to favoured entities).

The fall in confidence that we observed in the latter half of the last decade was entirely due to the rising price of gold. Look at what that did to the unemployment rate! Clearly the fault of gold-bugs and conspiracy theorists. The rising price of gold completely overrode the excellent work of the British Parliament in driving up the country's debt. As for Gordon Brown, he was a hero! His only flaw was in not going far enough. If he had sold all the UK's gold, imagine how low unemployment would be today!

This wouldn't be a post on the World Complex if we didn't do some kind of state space portrait, so here it is: unemployment rate vs. confidence ratio. 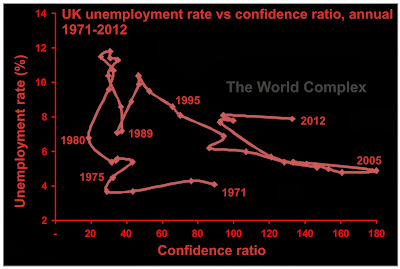 Policy decisions of British Parliament and their impact on unemployment can be followed from the above chart. Clearly the government in the 1970s laboured under the delusion that reducing debts would benefit the economy(1). They were rewarded for their imprudence by spiking unemployment in the early 1980s.

By the mid-1990s, they had discovered the golden ticket. With the rising confidence ratio, the UK was rewarded with a falling unemployment rate. Then came Gordon Brown's heroics–by aggressively selling gold he caused the confidence ratio to fall and the UK was showered with new jobs!

There was a small crisis in the latter part of the last decade. But since then–clearly back on track. If the forward evolution of the system follows a similar catenary to the period 1993-2005, then a mere quadrupling of the confidence ratio will restore the unemployment rate to about 6%. The most prudent way to achieve this would be to immediately sell off 75% of Britain's remaining gold (2).

I find this approach to finances inspiring, and am willing to give it a try. Here at The World Complex, the unemployment rate is unusually high (technically I am welcome to go to the office, but the treasury is empty). Looking at my finances, I see the problem–I have very little debt and high savings (although much lower than they were two years ago, thanks to the ongoing turmoil in the junior mining market). To rectify this oversight, I will be issuing bonds. For reasons of fiscal prudence, I will try to keep my confidence ratio below 100, and will begin an auction for $25 million in debt next Thursday (3). No cheap google ad payouts here!

(1) the rising price of gold may have had something to do with this. But this proves my point! Rising gold price = rising unemployment, you naughty gold bugs.

(2) in my opinion it would be too difficult to drive the gold price back down to $300/oz.

(3) securities officers and other sarcastically challenged individuals take note–this is intended as sarcasm. Your participation is welcome.