Then the rumour circulated that at night the Fed Governors neglected their sacrifices and prayers. A great depression seized everyone. One day the President said to the Fed Chief, "When will we celebrate the return of normal unemployment rates? I would like to make a journey and return in time for the feast. How long is it until the day of the feast?" The Fed Chief was embarrassed. It had been several days since she had looked at the moon and the stars. She had learned nothing more about their courses. The Fed Chief said, "Wait one more day and I will tell you." The President said, "Thank you. Tomorrow I will come to see you again."

— modified from The Ruin of Kasch

Economics isn't a science. It is a mistake to think it would be so. Science does not have schools. Only philosophies have schools.

Ideally science is described by working hypotheses, which are constantly tested, and if falsified, replaced (unless pride is involved or money). In philosophy, you begin with axioms, which are untestable statements that are defined as being true. Each school of economics has its own set of axioms. From axioms, you apply rules of inference (logic) in order to generate new statements, which are also true. These generated statements are called theorems. Thus all theorems are true (within the school of philosophy) but not necessarily applicable to the real world!

In the early days of geology, there were competing schools: the Neptunists and the Plutonists being two that come to mind immediately. The Neptunists believed that all rocks formed in the sea, either as sediments, or by crystallization as salts (this was their central axiom). The Plutonists believed that all rocks formed from magma (as their central axiom). Debates between adherents of the two schools were rowdy, fruitless affairs, because the nature of philosophy is that it cannot be overturned by mere observations.

The distinction between science and philosophy with respect to economics is important because economists have an annoying ability to set policy–policy that affects the quality of your lives. It probably doesn't matter much to you whether some geologists can't decide among themselves whether a particular rock formed in the sea or on a volcano (or even on a volcano in the sea). But it does make a difference if some Fed official acts on her belief that bankrupting the elderly eliminating interest on savings is a cure for unemployment.

Application of economic policy follows the axiomatic approach. Some high priest of an obscure caste

Recently, The World Complex presented the inverse correlation between the unemployment rate in the UK and its "confidence ratio" (dollar value of public debt divided by the dollar value of gold holdings). The idea was that a high ratio could only be supported if bondholders had high confidence that the debt would be properly serviced (forget about repayment). The flip side is that a high ratio could be interpreted as a measure of a country's ruin.

In the article I had suggested that government economists might cheer a decline in the price of gold.

So today, we look at the same relationship for the United States. 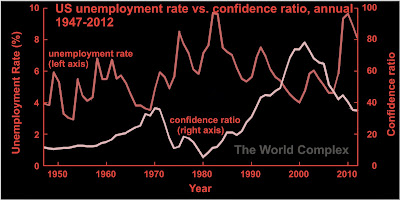 Once again we see a strong inverse relationship between confidence ratio and unemployment.

One of the goals set out for the Federal Reserve is to manage the unemployment rate. Looking at this chart, the answer is clear–to reduce unemployment, increase the confidence. Confidence (as defined above) can be increased in three ways: 1) raise debt, 2) sell gold, 3) lower the gold price.

Of course we all know that correlation does not imply causation. But it doesn't have to in order to impact on Fed policy. That's the beauty of politics–reality and truth don't really matter when there are elections to be won.

There was a comment that perhaps I have too much time on my hands. I'm not sure if the intent was to say that only someone with a lot of time on his hands would notice this relationship. The economists at the Fed have far more PhD's and time on their hands than does this corner of webspace. So I'm sure they have already seen this.

So the question becomes–even if no causation can be established, can it be used to set policy? And what policies will be followed?

Raising debt is the old standby–but as we see in the clarified chart below, it doesn't seem to be working anymore. 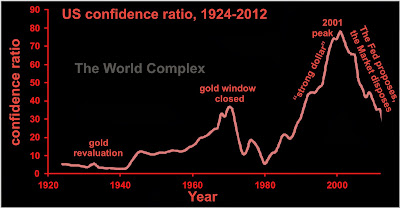 Since the 2001 peak (on September 10, perhaps?), the increasing debt has been more than compensated by the rising price of gold. Don't be fooled into thinking the US is sinking into solvency–it is creating debt faster than any time in history. But the price of gold has been rising faster still (although we shall see about 2013).

It appears that policy #2, the sale of gold, is politically untenable. Officially at least. Selling gold is for lesser countries.

So that leaves option #3 — hope the price of gold falls.

Perhaps they do more than hope.

. . . at first the story of Fiat-do-lar was like hashish when it makes wakefulness happy. Then the story was like hashish when it makes dreams delirious. Toward morning, Fiat-do-lar raised his voice. As the Nile rises in the hearts of men, so his words swelled. To some, his words brought serenity; to others,
they were as terrifying as the appearance of Azrael, the angel of death. Happiness filled the spirits of some, horror the hearts of others. The closer morning came, the mightier that voice grew and the more it resounded within the people. The hearts of men rose up against one another like clouds in the sky on a stormy night. Flashes of wrath met thunderbolts of fury. When the sun rose, the tale of Fiat-do-lar reached its end. Ineffable wonder filled the confused minds of the people. For when the living looked around, their gaze fell upon the Fed Chief and Governors. They were stretched out on the ground, dead.

— modified from The Ruin of Kasch