Gold dipped below its three-week high in London on profit taking after a 2% gain this week, which put gold on course for a second week of higher prices. Gold closed above the 50-day moving average and this in conjunction with two weekly higher closes is bullish technically.

Gold’s gains yesterday came due to increasing concerns that the Federal Reserve will maintain the pace of unprecedented monetary stimulus and debasement.

Gold is on track for its first yearly drop in over 13 years, as speculators sold gold on the COMEX and some investors became nervous of the recent price falls.
Gold is probably at a cyclical bottom and CPM sees gold prices rising sharply in 2016-2023, CPM Group’s Jeffrey Christian said in a speech in Toronto on Wednesday.

The call is interesting as CPM have been notoriously bearish on gold in recent years – throughout much of the 11 year bull market.
CPM Group sees the gold price at $1,240-$1,380/oz for “most of the next few months,” CPM managing partner Jeffrey Christian said. Gold may trade in a $1,240- to $1,500/oz range for “the next couple of years”. 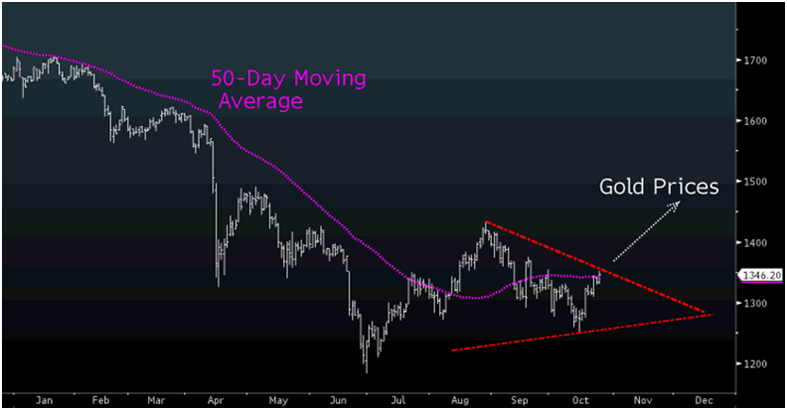 Gold may jump 7.5% or $100 to $1,450/oz by year end if prices break out of a pennant formation, according to technical analysis by Paul Kavanaugh of Future Path Trading as seen on Bloomberg.

The chart above shows gold trading in a “pennant flag,” when the upper and lower trend lines for prices meet to form a triangle. The lower level is $1,251, and the upper is $1,434, Kavanaugh said.

“Prices are clearly trying to move higher, and a close above the 50-day moving average means we could see some strength,” Kavanaugh said.

Comments from state backed Xinhua that call for a “de-Americanised world” and a proposal to consider a new international reserve currency to replace the dollar mark a key event for gold prices.

The official Xinhua News Agency and the voice of the Chinese government, offered a not so subtle, highly critical commentary on October 14 regarding the U.S.’ appalling fiscal, monetary and political situation as it stands today.

While the Chinese echoed the notion of a “super-sovereign reserve currency” before, their statement is more important as the U.S. continues to struggle to reach agreements on debt ceiling talks and future monetary policy actions.

“It is perhaps a good time for the befuddled world to start considering building a de-Americanised world” said the important op-ed.

Key among its proposals: the creation of a new international reserve currency to replace the present reliance on the U.S. dollar as reserve currency. The article suggested that this is a necessary step to prevent American bumbling and profligacy from further afflicting the world.

“The world is still crawling its way out of an economic disaster thanks to the voracious Wall Street elites.”

“The cyclical stagnation in Washington for a viable bipartisan solution over a federal budget and an approval for raising the debt ceiling has again left many nations’ tremendous dollar assets in jeopardy and the international community highly agonized,” says Xinhua.

The Chinese have for a long number of years expressed concerns about the direction Washington, led by Wall Street, is leading the world financial system and the global economy.

The goal is to “create an international reserve currency that is disconnected from individual nations and is able to remain stable in the long run.”

This sounds like he may be referring to gold, as gold is an “international reserve currency that is disconnected from individual nations” and has remained “stable in the long run.”
Toppling the dollar isn’t enough today, however: “Several cornerstones should be laid to underpin a de-Americanised world,” explains the Xinhua piece.

Along with a greater role for developing-market economies in both the World Bank and International Monetary Fund, “the authority of the United Nations in handling global hot-spot issues has to be recognized. That means no one has the right to wage any form of military action against others without a UN mandate.”

“A self-serving Washington has abused its superpower status and introduced even more chaos into the world by shifting financial risks overseas, instigating regional tensions amid territorial disputes, and fighting unwarranted wars under the cover of outright lies,” the commentary continues.

“Such alarming days when the destinies of others are in the hands of a hypocritical nation have to be terminated, and a new world order should be put in place, according to which all nations, big or small, poor or rich, can have their key interests respected and protected on an equal footing.”

Since the early 2000s, those positive on gold have rightly suggested that excessive money printing by the Federal Reserve would lead to a devaluation of the world’s reserve currency as inflation picks up and hampers the currency.

Those more concerned about the dollar’s fate has warned of a currency collapse and serious inflation.

While the notion of the dollar losing its status as the world’s reserve currency had appeared muted for some time given the lack of alternatives, it is now gaining credence.

Its last reported gold holdings in April 2009 were 1,054 metric tons. After adjusting for net imports from Hong Kong and domestic output, the figure is closer to 5,086 metric tons. If one were to take away gold uses for jewelry, industrial, and other categories and only add implied bar demand to central bank holdings, the figure is likely closer to 2,710 metric tons according to Bloomberg Industries’ Andrew Cosgrove and Kenneth H
offman.

In just 10 years, China’s gold holdings could catch up to the U.S., based on adjusted Chinese consumption for jewelry, industrial and other uses and using implied bar demand as the primary driver of incremental central bank additions (see chart).

At current run rates, China is on pace to add 622 metric tons of bars to its central bank holdings this year (380 mt in 2012). Given the low gold price, growing reserves in 2014 above this year’s levels appears achievable.

Gold will benefit from the continuing move away from the dollar as the world’s reserve currency as some form of a gold-backed currency emerges.

China’s call for “de-Americanization” is likely just a posturing maneuver. A large-scale sale of China’s U.S. Treasury holdings would likely cause a dramatic decline in the dollar, while increasing rates. This would cripple the U.S. economy and dent export demand for Chinese products.

This therefore, is the “nuclear option” for the Chinese government and one that they will be keen to avoid. They will only adopt this position if forced to in extreme circumstances, such as a U.S. default or extreme debasement of the dollar.

Already, the Chinese have stopped accumulating dollars – preferring safer currencies, infrastructure, hard assets and commodities and of course gold. Even a small amount of Chinese selling  could lead to substantial dollar weakness and much higher bond yields plummeting the U.S. into another recession.

The smart money, including the Chinese people and the People’s Bank of China, is concerned about currency debasement and continue to accumulate physical gold for the long term.

The dumb money continues to not understand the ramifications of dollar currency debasement and the De-Americanising world and continues to see gold as a trade or a mere speculation rather than the essential safe haven asset that it is.

Gold is heading for the first annual decline since 2000.

The Chinese have lustily greeted gold’s 19% drop this year by continuing to buy record amounts of gold. They know the price drop has created a gift for physical buyers globally.