Gold was treading water below five week highs today, as investors
weighed the decline in Chinese demand from record levels with still very
robust demand in India. Silver is up 1% as robust industrial and store
of wealth demand supports silver.

Silver in US Dollars, 1 Year – (Bloomberg)

Gold prices in China closed lower than global prices yesterday for
the first time this year. This may be due to a slight decrease in demand
in recent days. There was also speculation that this was due to fears
of a credit tightening and the possibility of a credit crisis in China.

Indian premiums stayed near record highs at $130 per ounce due to a supply crunch and supply shortages.

The Fed will make a statement later on Wednesday at the end of its
two-day policy meeting. The bank is widely expected to say it will stay
on course with its ultra loose monetary policies and will not reduce its
money printing, debt monetisation programme.

U.S. stocks closed at historic highs on hopes that the Fed will
continue supporting and indeed creating another liquidity driven bubble.

When the annual record for the Silver Eagles happened in 2011 at
39,868,500, it took until December 13, for sales to reach the levels
reached this year. 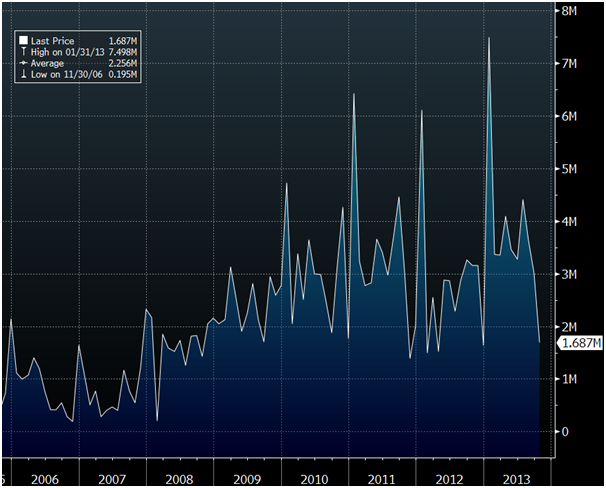 The chart above clearly shows the long term trend towards higher
silver eagle demand in recent years as store of value buyers accumulate
silver eagles to protect against currency devaluation and wealth
confiscation. 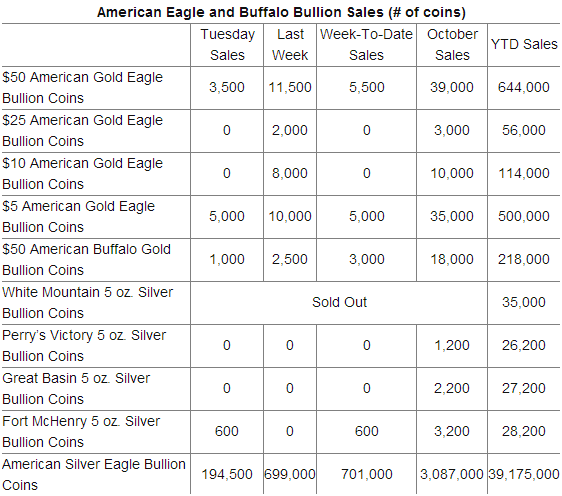 Some of those who bought silver in 2011 as an investment may be
reluctant to buy more silver due to recent volatility. We have long
pointed out that silver is not an ‘investment’ per se rather it is a
store of value and a form of financial insurance. Silver is to be bought
for the long term – until it has to be sold due to a need to raise cash
– indeed a permanent holding.

Realising this helps people stomach the short term price swings that
are typical in the silver market. This is important as silver will
protect them from currency devaluations and the coming bail-in regime.

It is worth pointing out that all markets are volatile today and silver’s volatility is often exaggerated.

Silver in US Dollars, 5 Years – (Bloomberg)

Our long held belief that silver could reach the record 1980 high in real terms, inflation adjusted, if $140/oz remains.

Immediate support is at the $18/oz to $20/oz level (see charts) and
store of value buyers should continue to accumulate on this dip.