Today, Judge David Stras of the Eighth Circuit spoke at Duke Law School. The event was co-sponsored by the Federalist Society and the Clerkship Office. Stras’s topic was “What My Grandparents’ Experiences in the Holocaust Taught Me about the First Amendment.” In July, I appeared with Stras at an event about the same topic.

During Stras’s presentation, two dozen students stood up. One student read from prepared remarks. A Duke 3L posted a video to Twitter:

We respect Judge Stras’s vulnerability as he shared stories from his family’s experience during the Holocaust, and how they shaped his jurisprudence.

But when he drew parallels between Nazi oppression and laws that protect LGBTQ+ people, we were unwilling to stay silent. https://t.co/tf8icKpi2l pic.twitter.com/8RqGCk3c7Y

Your honor I would like to speak for a group of students who are here to listen and defend their views as you are encouraging us to do.

I am a queer Jewish law student. Lawyers, politicians, and others who advocate for LGBT anti-discrimination laws are not comparable to Nazis. Suggesting otherwise as you have is abhorrent and although we came to listen to you speak we are not going to sit here and listen to blatant homophobia. Thank you for coming today.

Judge Stras said, “Thank you for speaking out.” Judge Stras handled this situation with grace.

The Duke OutLaw chapter elaborated on their views in a tweet.

And the students handed out a document about Judge Stras. 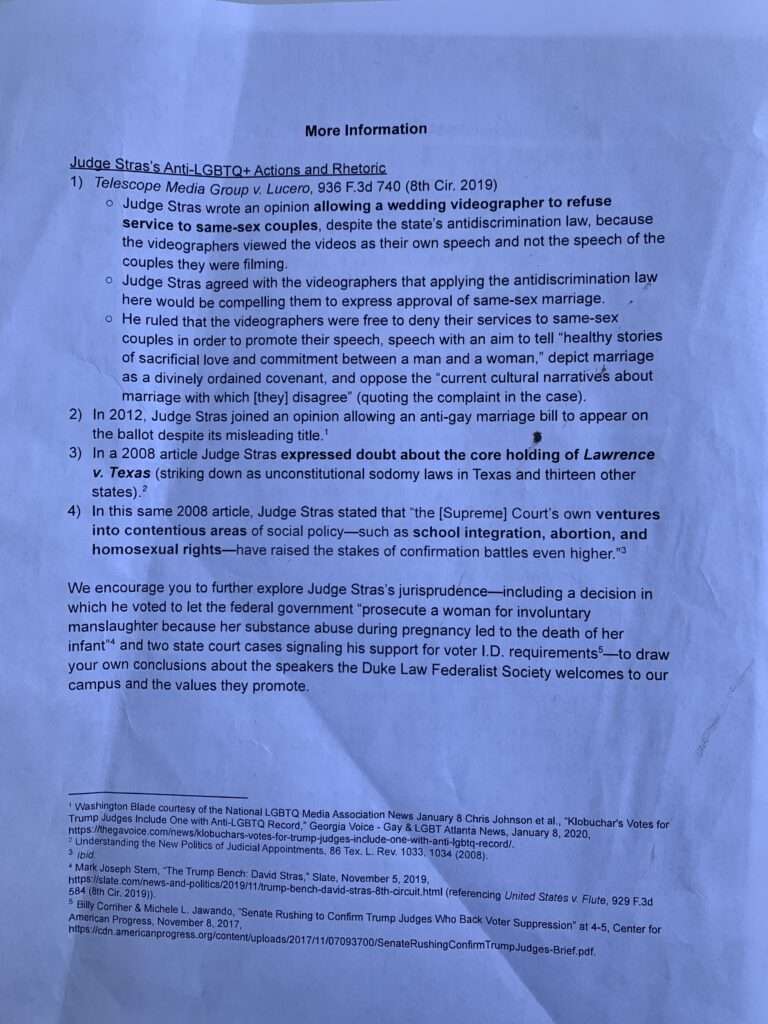 I do not yet have all the facts. I will opine further as I learn more.

from Latest – Reason.com https://ift.tt/3ur1W8B
via IFTTT