Gold inched up in London as the dollar fell to a two year low against the euro. The yellow metal is on track for a four week high, as investors buy precious metals on increased safe haven demand. Gold Krugerrands (1 oz) are trading at $1,403.75 or premiums between 4.75% and 5.5%  and Gold Kilo Bars (1 kilo) are trading at $44,354.53 or premiums between 3% and 3.5%. Premiums are holding steady.

The poor economic data published recently in the U.S. is signalling that the economic recovery is on shaky ground, and this has increased the allure of bullion.

Koos Jansen’s blog, “In Gold We Trust” explores the recent surge of bullion exports from Switzerland.

In it he notes that Switzerland holds four of the largest gold refineries on the planet – Metalor, Pamp, Argor-Heraeus and Valcambi. These refineries are estimated to be responsible for 70% of the world’s refining nestled in the Swiss Alps, and therefore a major amount of the world’s gold is distributed there. 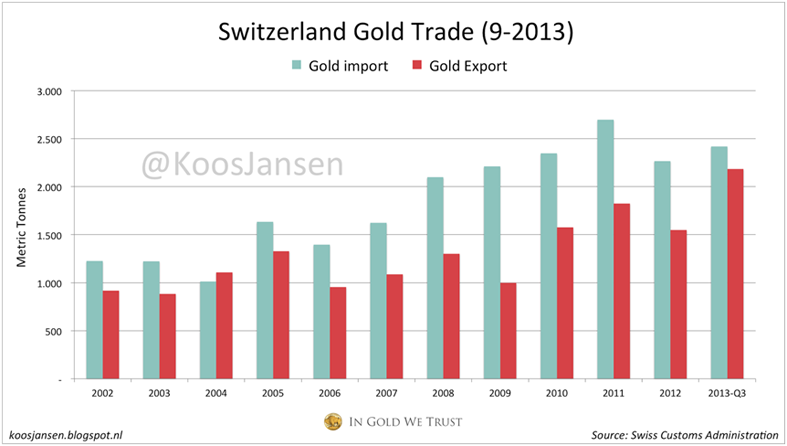 Courtesy of Koos Jansen’s – “In Gold We Trust”

Jansen notes that this is a new record for exports for the small country with a yearly estimate of 2,912 tons for exports.  It is surmised that 1,100 tons of the gold bullion is set to flow East to China or Hong Kong.

In 2013 from January to August published figures list Hong Kong as having imported 598 tons from Switzerland. Jansen writes that although most of this is sent forward to Shanghai, however the Chinese are also importing directly from the Swiss.

This is verified from Shanghai Gold Exchange (SGE) physical deliveries and from Alex Stanzcyk, Chief Market Strategist at Anglo Far-East Bullion, who Jansen spoke with directly. Stanzcyk said, “China imports a lot that’s not going through Hong Kong (or through the SGE!)”.

In the interview Stanczyk explained how one of their partners had lunch recently with the head of the largest global operations company in security transport. He said there is a lot of gold that they’re moving into China that’s not going through exchanges. If the gold is for the government they don’t have to declare where it’s going. They don’t have to declare where it’s going in, or where it’s heading. If you look at the way the Chinese do things, why would they tell?

The People’s Republic Bank of China (The Chinese Central Bank), tend to shy away from routine reporting of their outright gold purchases to the IMF. A sensible strategy given their implied policy of reducing dollar reserve risk.