Submitted by The World Complex

One more time–the distinction between human- and algo-trading

The markets do not act like they once did. The trading in certain stocks is operating on time-scales so small that they cannot be in response to human thought. Not only are certain individuals able to access key information before others and so respond to news releases faster than the speed of light, but certain entities have free range to post and cancel orders on a microsecond basis, and queue-jump by shaving off (or adding on) tiny fractions of a penny from their orders.

Stocks traded by humans tend to make significant moves on a timescale of minutes to days. Even when there is a news event that radically changes the apparent value of a company, if there are only humans in the market, the move takes time to occur. Below are a couple of charts for Detour Gold (I currently have no position in this stock) 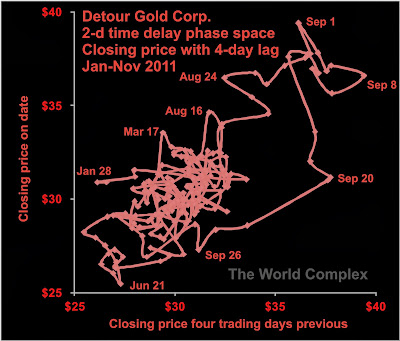 Normally, when looked at on a ms timescale, the graph is not really distinguishable from a straight line. 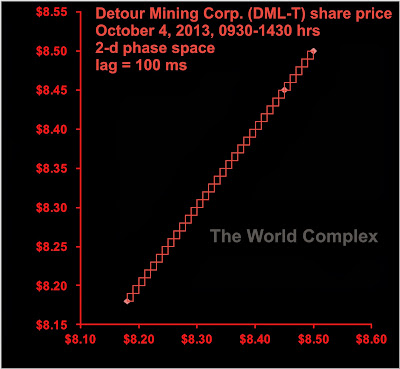 The little squares occur because all the price-changes I saw in the course of the day were a penny. On this scale it scarcely matters which axis is the current price and which is the lagged-price.

Once the algos get involved, the millisecond phase space plots get a lot more interesting. Some of them are works of art! Below, some plots for Century Casinos (I have no position in this one, either). Data here. 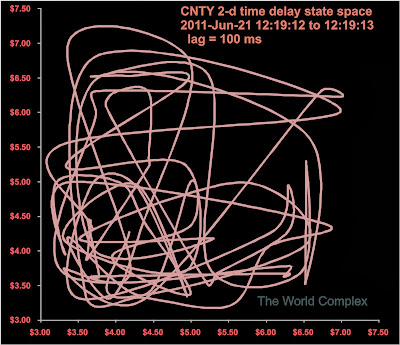 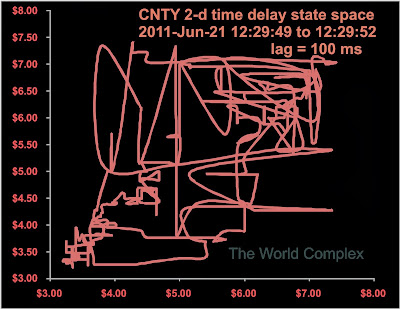 Nice to look at, but maybe not so nice to trade against.

Remember the adage about playing poker: If you don’t know who the sucker is . . .