Recorded webinar: How To Protect Your Savings From Confiscation

Gold rose 0.85% and silver rose 0.74% on Friday. Gold made gains Friday but still finished the week 2.8% lower. Gold fell back below $1,200 an ounce today as technical selling and year end book squaring led to price falls.

Prices were slightly higher in Asian trading overnight as physical demand picked up in Asia and holdings of the SPDR Gold Trust rose 5.40 tonnes to 814.12 tonnes on Friday – the first inflow since November 5.

Volumes traded on the increasingly important Shanghai Gold Exchange (SGE) overnight on their benchmark 99.99% pure gold contract were a robust 14.83 tonnes. Chinese premiums edged up $2 – from $16 on Friday to $18 today.

Allegations that banks are rigging the gold and silver markets continue to gain credence and Bloomberg have published an article by Rosa Abrantes-Metz entitled‘How to Keep Banks From Rigging Gold Prices’ (see article including charts below).

Rosa Abrantes-Metz concludes that gold prices may be manipulated and gives evidence to support her assertion. Abrantes-Metz is adjunct associate professor at New York University’s Stern School of Business and a director in the antitrust, securities and financial regulation practices of Global Economics Group.

Falling gold prices despite robust physical demand this year, especially in China, have intensified allegations that gold prices are being manipulated lower. This is the contention of the Gold Anti-Trust Action Committee (GATA), influential blog Zero Hedge and others who contend that bullion banks and central banks may be intervening and surreptitiously manipulating gold prices lower in order to maintain faith in fiat currencies.

It is an important debate and one that has ramifications not just for the gold and silver market but for markets in general and for free market capitalism. 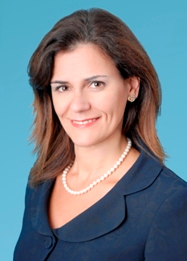 Abrantes-Metz’s article shows how what was once dismissed as an outlandish “conspiracy theory” and the proponents of the theory laughed at as paranoid tin foil hat wearers, is now not considered quite so outlandish. This is especially the case, given the fact that banks have been found to be manipulating and rigging many markets and governments are openly active in currency and especially bond markets today.

As long ago as two years ago, the assistant editor of the Financial Times, Gillian Tett wrote in that paper that it would be “foolish” to “deride or ignore” the Gold Anti-Trust Action Committee (GATA) and their allegations regarding manipulation of the gold market.

Tett is an award-winning journalist and author and one of the most astute observants of markets and finance in the world today. Yet her article failed to lead to a wider debate and went down the ‘memory hole.’ As many positive gold facts, figures and developments have done in recent years.

Tett acknowledged that central banks intervene in and manipulate interest rates and her article explored whether central banks might also be manipulating gold prices.

“For my money, though, I think there are at least two reasons why it would be foolish simply to deride or ignore GATA, “ Tett concluded. She acknowledged that some of GATA’s points “have at least a grain of truth”.

“Even if you find it hard to believe that central bankers would be dastardly enough to create a plot – or competent enough to do what Gata claims – the fact is that global commodity markets are pretty murky, central banks are often opaque and western rhetoric about “free” markets is often hypocritical. Those issues merit far more debate, not just among journalists, but central bankers too.”

Abrantes-Metz article is in a similar vein and may signal the beginning of a real debate about the allegations made about gold price manipulation that have yet to be rebutted.

Authorities around the world are gradually piecing together a shocking picture of how banks have manipulated benchmarks that influence the price of everything from mortgage loans to foreign currencies.

Another area deserves their scrutiny: gold and silver.

In recent weeks, Bloomberg News and others have reported on concerns, among market participants and regulators, that the process for establishing the price of gold may lend itself to insider trading and other forms of unfair dealing. The available evidence strongly suggests manipulation and, given the structure of the market, possibly collusion.

The price-setting mechanism, known as the fixing, provides an easy vehicle for manipulation. Twice every business day in London, representatives of five banks and some select clients participate in a phone call in which offers to buy and sell gold are put forward. These calls determine the morning and afternoon gold fixings, which serve as the benchmark for trillions of dollars in transactions around the world. Silver fixings work similarly, with only three banks involved.

Such direct communication is conducive to collusive pricing, especially when the group of participating competitors is very small. We now know that collusion distorted both the Libor and Euribor interest-rate benchmarks, which involved many more participants. In those cases the coordination occurred through e-mails and instant messages. In the case of gold and silver, an organized live call allows for real-time signaling of the desired prices, obviating the need for additional contacts.

One needn’t look far for a motive. The participating banks all stand to gain both from using the privileged knowledge they glean during the fixing process and from influencing the fixing itself. Aside from trading in the spot markets for gold and silver, they may have significant derivatives positions tied to the benchmarks. The system isn’t set up to identify, let alone deter, such activity. It is the participating banks themselves that administer the gold and silver benchmarks.

So are prices being manipulated? Let’s take a look at the evidence. In his book “The Gold Cartel,” commodity analyst Dimitri Speck combines minute-by-minute data from most of 1993 through 2012 to show how gold prices move on an average day (see attached charts). He finds that the spot price of gold tends to drop sharply around the London evening fixing (10 a.m. New York time). A similar, if less pronounced, drop in price occurs around the
London morning fixing. The same daily declines can be seen in silver prices from 1998 through 2012. 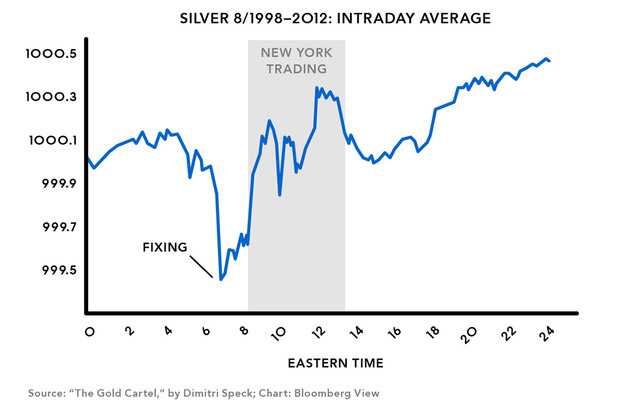 For both commodities there were, on average, no comparable price changes at any other time of the day. These patterns are consistent with manipulation in both markets.

It’s extremely odd that the prices of gold and silver are still based on such an archaic and exclusive system. Whether or not authorities seek and find conclusive evidence of manipulation, they should learn the lesson of the London interbank offered rate and reform the gold and silver markets in a way that will deter such behavior. Both metals are highly liquid commodities, so their benchmark prices could easily be set by observing actual trades. To ensure reliability, the process should be overseen by an independent institution with the appropriate governance structure and minimal conflicts of interest.

The best way to restore confidence in financial benchmarks is to remove the means, motive and opportunity for abuse.

It is an important debate as increasingly governments and central banks are distorting financial markets through constant interventions which could lead to the financial system itself being impaired.

In the western world, we have seen interest rates cut close to zero, capital injections and bank bailouts, lending guarantees, saving and deposit guarantees, favouring certain banks and institutions over others, banning short selling and now the latest policy initiative is again bailing out banks but this time bailing in depositors inbail-ins.

At the same time competitive currency devaluations are taking place globally with central banks debasing currencies. We also see outright intervention in currency markets in order to lower the value of national and supranational currencies.

Surging gold prices are a vote of no confidence in fiat paper currencies and government and central banks stewardship of these currencies.

This is especially the case with the US dollar as the global reserve currency and all governments have an interest in maintaining faith in the dollar and in fiat currencies which is a possible motive for intervention in the gold and silver markets.

Check Out From Bail-Outs to Bail-Ins: Risks and Ramifications – Includes 60 Safest Banks In World (51 pages)