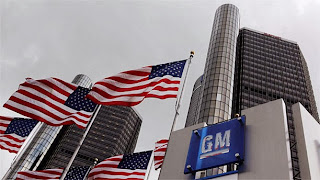 Every year on average there are at least 4 momentum stocks that capture Wall Street`s fancy and all the fund managers pile into these names. Hedge funds realize this investing phenomenon and try to figure out which names are going to be the chosen ones this year so they can ride along the coattails of the institutions, pension funds and money managers. These stocks are the absolute best stocks to invest in from a risk and return standpoint because you are riding along with the smart money, the crowd and every other technically based buy program as these stock charts are an investor`s paradise.

Impossible to Short Momentum Stocks in Heart of Momentum Run

The shorts come in at various times thinking these names are overdone on valuation concerns and they get their head handed to them, or shorts more specifically, causing additional fuel for the upside trek to higher monthly highs in the stocks. In essence, these stocks are ‘un-shortable’ and short sellers need to recognize what constitutes a Momentum Stock on Wall Street just as much as longs because failure to do so is just like committing investor suicide.

Blackberry: A Long Strategy for 2014

This past year for 2013 the momentum stocks were Netflix, Inc. (NFLX), Amazon.com Inc. (AMZN), Tesla Motors, Inc. (TSLA), priceline.com Incorporated (PCLN), Google Inc. and The Boeing Company (BA). One look at these charts can tell the investor why identifying next year`s momentum stock candidates is so important from an investment strategy. It is very helpful to be aligned with all the players on the right side of the investment.

Drivers for GM being a Momentum Stock

Here are some of the reasons why I think General Motors Company (GM) makes for a good momentum stock candidate in 2014. First, the government has finally exited their stake in the company freeing up institutional investors to start acquiring a sizable position in the automaker now that GM is no longer influenced by the government`s jurisdiction. 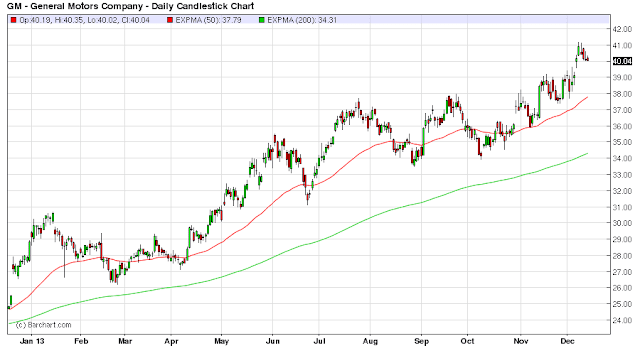 The second factor is that several other notable players like Kyle Bass of Hayman Capital Management, L.P. have started talking up the name recently, and when Hedge Funds start talking the old adage where there is smoke, there is fire applies here. GM is being talked about in the investment community which includes conferences, meetings, seminars and money raising initiatives. Big players raise money around investment ideas, and I think GM is one of these names.

Relaxing Oil Export Ban is Bad News for US Consumers

The third factor is the broader economy seems to be slowly getting better with the jobs environment improving each quarter; this bodes well for new vehicle sales.

The fourth factor is now that the government is no longer involved with management influence in regards to decisions, GM can be more aggressive in driving the profit factor, and they should be able to pursue more aggressive business practices which generate better quarterly results year over year on a comparison basis.

The fifth driver for the stock is the way it is trading relative to the broader market, and while the broader market has exhibited some weakness mainly on the risks associated with the FOMC meeting this week, GM has been hanging in there quite strong and fighting against this overall recent market weakness. This is a very bullish sign, and it usually means that investors think there is considerable long-term value in the stock so they aren`t selling, and other players like institutions are probably holding this stock up because they are in the acquiring mode on any weakness in the stock. Again, this is what an investor wants to see in a stock, how well it trades against the broader market.

One potential concern is that GM has sold a lot of automobiles over the last three years, and if there is one factor to watch it is how many more customers there are in the broader economy that need to upgrade to a new vehicle this year. I have seen just an amazing number of those Chevrolet Camaros on the streets, and I wonder if GM could run into some tough comps on certain product categories, and market and product saturation issues. This is something to monitor as a possible concern, and to follow in the quarterly presentations by the company. 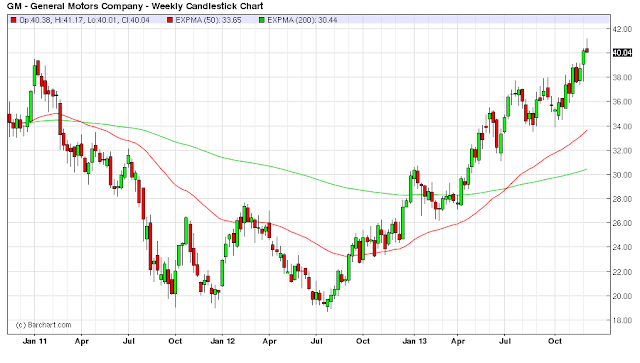 The other possible concern is that GM is up about 18% in 6 months, and 61% in 2013. However, the stock is only up 17% over a five year time period, and the government yielded considerable influence during this period both from a management perspective and an ownership stake in the company.

My thesis is that with the government being a net seller on the market, this has limited GM`s upside, and now that longer term investors have acquired these shares, the company is set to really take off in 2014 like some of the Momentum Stocks of the past 5 years.

However, all that being said my initial price target for the stock is $65 a share sometime over the next six months, and maybe as soon as this April. I also have my mid-term price target at $80 a share towards the end of 2014. Some of this depends upon what the overall stock market is doing, but I am assuming in this analysis that GM holds up better, probably outperforms the overall broader market.

Thus, this is my first Momentum Stock candidate for 2014 in General Motors Company and I would recommend buying this stock if possible on a slight pullback, in the $38 a share range would be a great entry price. However, I have been watching this name, and the investor may not get the chance to get into the stock on a pullback, so beware of that possibility. Sometimes good stocks that everybody is interested in don`t offer ideal pullback entry points, regardless I would recommend acquiring a position before 2014 begins in the investing universe. 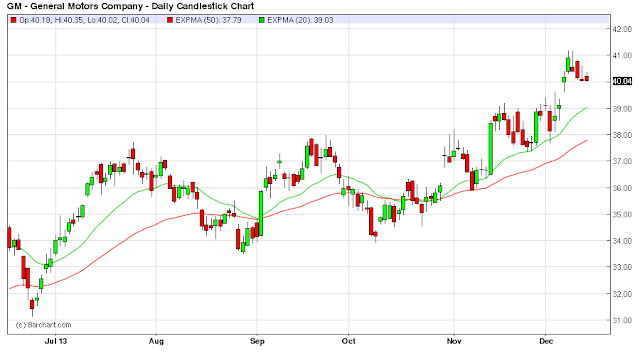 We wrote this article prior to the Ford 2014 Profit Downgrade, which sent GM shares lower just below $40 a share before rebounding higher, but it seems investors are worried that Ford`s troubles may be hinting of broader concerns in the vehicle marketplace. The question for investors is whether these concerns are Ford specific or have broader implications for the rest of the automakers? The next quarterly earnings calls should shed some light on this subject, and give possible clues for investors.  However, GM the stock has definitely underperformed the broader market once the Ford news came out, something to watch before putting new money to work in the stock.