Just days after we reported that the Massachusetts Attorney General is suing the makers of OxyContin, the deadly nature of America’s opioid crisis has again reared its ugly head: US border patrol agents just made the largest Fentanyl bust in the country’s history, confirming that this nationwide epidemic is worse than ever.

On his show this week, Tucker Carlson reported: “Well, the U.S. border patrol has made the biggest fentanyl bust in history. An enormous amount, enough fentanyl to kill—they estimate—57 million people. That’s more than the combined population of the states of Illinois, New York and Pennsylvania. It’s a lot.”

Reporter Hillary Vaughn on Fox News broke the story, stating: “We got our hands on an internal memo from U.S. Customs and Border Patrol that details this bust. The biggest fentanyl seizure in U.S. history. According to the memo, four days ago in Nogales, Arizona, at the port of entry, CBP officers stopped a tractor-trailer crossing the U.S.-Mexico border into the U.S. with enough fentanyl to kill 57 million people.” 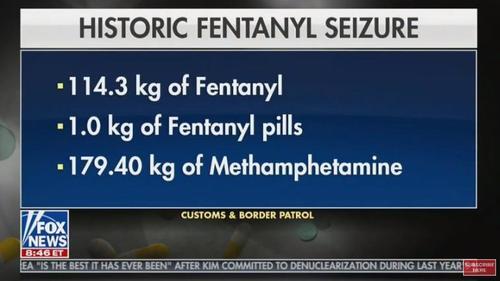 The Fentanyl shipment – which was found under the floor of the trailer – consisted of a whopping 114 kgs of the drug – compare this to the just 2mg that is considered to be a fatal dose. Agents also seized 179 kg of methamphetamine. The total seizure was said to have a street value of $102 million.

The smuggler, a Mexican national, was a member of the DHS trusted traveler program (FAST) and was arrested at the border.

This comes just days after the Massachusetts attorney general declared that the family behind the drug Oxycontin is responsible for the opioid epidemic ravaging the United States. Purdue Pharma and eight members of the Sackler family who own the company, are being accused of personally starting the opioid crisis by deceptively selling Oxycontin.

According to CBS News, MA attorney general Maura Healey alleges the Sackler family hired “hundreds of workers to carry out their wishes.” Those wishes included pushing doctors to get “more patients on opioids, at higher doses, for longer, than ever before” all while paying “themselves billions of dollars.” In her lawsuit, Healey names eight members of the family that own Purdue Pharma, alleging they “micromanaged” a “deceptive sales campaign.”

In the conclusion to the complaint, Healey said the Sackler family used the power at their disposal to engineer an opioid crisis.

You can watch the entire Tucker Carlson segment on the bust here: