Authored by CJ Hopkins via The Unz Review,

Maybe Donald Trump isn’t as stupid as I thought. I’d hate to have to admit that publicly, but it does kind of seem like he has put one over on the liberal corporate media this time. Scanning the recent Trump-related news, I couldn’t help but notice a significant decline in the number of references to Weimar, Germany, Adolf Hitler, and “the brink of fascism” that America has supposedly been teetering on since Hillary Clinton lost the election. I googled around pretty well, I think, but I couldn’t find a single editorial warning that Trump is about to summarily cancel the U.S. Constitution, dissolve Congress, and proclaim himself Führer. Nor did I see any mention of Auschwitz, or any other Nazi stuff … which is weird, considering that the Hitler hysteria has been a standard feature of the official narrative we’ve been subjected to for the last two years.

So how did Trump finally get the liberal corporate media to stop calling him a fascist? He did that by acting like a fascist (i.e., like a “normal” president). Which is to say he did the bidding of the deep state goons and corporate mandarins that manage the global capitalist empire … the smiley, happy, democracy-spreading, post-fascist version of fascism we live under. 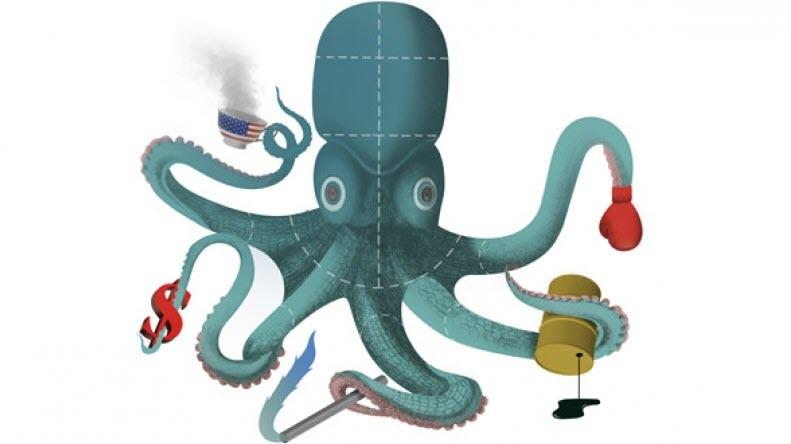 I’m referring, of course, to Venezuela, which is one of a handful of uncooperative countries that are not playing ball with global capitalism and which haven’t been “regime changed” yet. Trump green-lit the attempted coup purportedly being staged by the Venezuelan “opposition,” but which is obviously a U.S. operation, or, rather, a global capitalist operation. As soon as he did, the corporate media immediately suspended calling him a fascist, and comparing him to Adolf Hitler, and so on, and started spewing out blatant propaganda supporting his effort to overthrow the elected government of a sovereign country.

Overthrowing the governments of sovereign countries, destroying their economies, stealing their gold, and otherwise bringing them into the fold of the global capitalist “international community” is not exactly what most folks thought Trump meant by “Make America Great Again.” Many Americans have never been to Venezuela, or Syria, or anywhere else the global capitalist empire has been ruthlessly restructuring since shortly after the end of the Cold War. They have not been lying awake at night worrying about Venezuelan democracy, or Syrian democracy, or Ukrainian democracy.

This is not because Americans are a heartless people, or an ignorant or a selfish people. It is because, well, it is because they are Americans (or, rather, because they believe they are Americans), and thus are more interested in the problems of Americans than in the problems of people in faraway lands that have nothing whatsoever to do with America. Notwithstanding what the corporate media will tell you, Americans elected Donald Trump, a preposterous, self-aggrandizing ass clown, not because they were latent Nazis, or because they were brainwashed by Russian hackers, but, primarily, because they wanted to believe that he sincerely cared about America, and was going to try to “make it great again” (whatever that was supposed to mean, exactly).

Unfortunately, there is no America. There is nothing to make great again. “America” is a fiction, a fantasy, a nostalgia that hucksters like Donald Trump (and other, marginally less buffoonish hucksters) use to sell whatever they are selling … themselves, wars, cars, whatever. What there is, in reality, instead of America, is a supranational global capitalist empire, a decentralized, interdependent network of global corporations, financial institutions, national governments, intelligence agencies, supranational governmental entities, military forces, media, and so on. If that sounds far-fetched or conspiratorial, look at what is going on in Venezuela.

The entire global capitalist empire is working in concert to force the elected president of the country out of office. The US, the UK, Canada, France, Germany, Spain, Austria, Denmark, Poland, the Netherlands, Israel, Brazil, Peru, Chile, and Argentina have officially recognized Juan Guaido as the legitimate president of Venezuela, in spite of the fact that no one elected him. Only the empire’s official evil enemies (i.e., Russia, China, Iran, Syria, Cuba, and other uncooperative countries) are objecting to this “democratic” coup. The global financial system (i.e., banks) has frozen (i.e., stolen) Venezuela’s assets, and is attempting to transfer them to Guaido so he can buy the Venezuelan military. The corporate media are hammering out the official narrative like a Goebbelsian piano in an effort to convince the general public that all this has something to do with democracy. You would have to be a total moron or hopelessly brainwashed not to recognize what is happening.

What is happening has nothing to do with America … the “America” that Americans believe they live in and that many of them want to “make great again.” What is happening is exactly what has been happening around the world since the end of the Cold War, albeit most dramatically in the Middle East. The de facto global capitalist empire is restructuring the planet with virtual impunity. It is methodically eliminating any and all impediments to the hegemony of global capitalism, and the privatization and commodification of everything.

Venezuela is one of these impediments. Overthrowing its government has nothing to do with America, or the lives of actual Americans. “America” is not to going conquer Venezuela and plant an American flag on its soil. “America” is not going to steal its oil, ship it “home,” and parcel it out to “Americans” in their pickups in the parking lot of Walmart.

What what about those American oil corporations? They want that Venezuelan oil, don’t they? Well, sure they do, but here’s the thing … there are no “American” oil corporations. Corporations, especially multi-billion dollar transnational corporations (e.g., Chevron, ExxonMobil, et al.) have no nationalities, nor any real allegiances, other than to their major shareholders. Chevron, for example, whose major shareholders are asset management and mutual fund companies like Black Rock, The Vanguard Group, SSgA Funds Management, Geode Capital Management, Wellington Management, and other transnational, multi-trillion dollar outfits. Do you really believe that being nominally headquartered in Boston or New York makes these companies “American,” or that Deutsche Bank is a “German” bank, or that BP is a “British” company?

And Venezuela is just the most recent blatant example of the empire in action. Ask yourself, honestly, what have the “American” regime change ops throughout the Greater Middle East done for any actual Americans, other than get a lot of them killed? Oh, and how about those bailouts for all those transnational “American” investment banks? Or the billions “America” provides to Israel? Someone please explain how enriching the shareholders of transnational corporations like Raytheon, Boeing, and Lockheed Martin by selling billions in weapons to Saudi Arabian Islamists is benefiting “the American people.” How much of that Saudi money are you seeing? And, wait, I’ve got another one for you. Call up your friendly 401K manager, ask how your Pfizer shares are doing, then compare that to what you’re paying some “American” insurance corporation to not really cover you.

For the last two-hundred years or so, we have been conditioned to think of ourselves as the citizens of a collection of sovereign nation states, as “Americans,” “Germans,” “Greeks,” and so on. There are no more sovereign nation states. Global capitalism has done away with them. Which is why we are experiencing a “neo-nationalist” backlash. Trump, Brexit, the so-called “new populism” … these are the death throes of national sovereignty, like the thrashing of a suffocating fish before you whack it and drop it in the cooler. The battle is over, but the fish doesn’t know that. It didn’t even realize there was a battle until it suddenly got jerked up out of the water.

In any event, here we are, at the advent of the global capitalist empire. We are not going back to the 19th Century, nor even to the early 20th Century. Neither Donald Trump nor anyone else is going to “Make America Great Again.” Global capitalism will continue to remake the world into one gigantic marketplace where we work ourselves to death at bullshit jobs in order to buy things we don’t need, accumulating debts we can never pay back, the interest on which will further enrich the global capitalist ruling classes, who, as you may have noticed, are preparing for the future by purchasing luxury underground bunkers and post-apocalyptic compounds in New Zealand. That, and militarizing the police, who they will need to maintain “public order” … you know, like they are doing in France at the moment, by beating, blinding, and hideously maiming those Gilets Jaunes (i.e., Yellow Vest) protesters that the corporate media are doing their best to demonize and/or render invisible.

Or, who knows, Americans (and other Western consumers) might take a page from those Yellow Vests, set aside their political differences (or at least ignore their hatred of each other long enough to actually try to achieve something), and focus their anger at the politicians and corporations that actually run the empire, as opposed to, you know, illegal immigrants and imaginary legions of Nazis and Russians. In the immortal words of General Buck Turgidson, “I’m not saying we wouldn’t get our hair mussed,” but, heck, it might be worth a try, especially since, the way things are going, we are probably going end up out there anyway.