Every week the village gathers and watches the regularly scheduled public crushing of Mr. $VIX. It doesn’t matter what happens in the world during the week, it doesn’t matter what economic reports may bring, or what earnings reports may miss. Every single Friday, irrespective of any new data, Mr. $VIX is found guilty and crushed to death. I’ve been making light of the predictability of it all on twitter by calling the program Risk Free Friday the past few weeks. 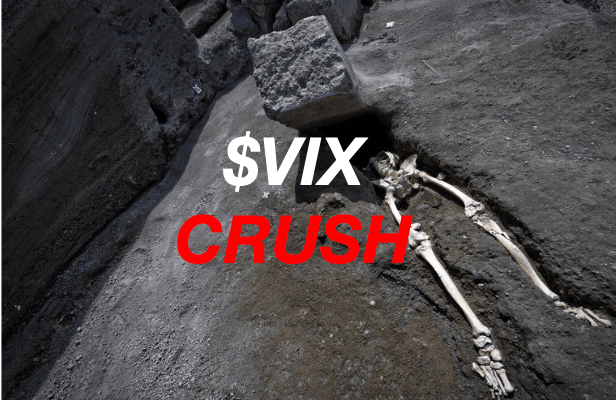 Why? Well, because it’s self-evidently true: 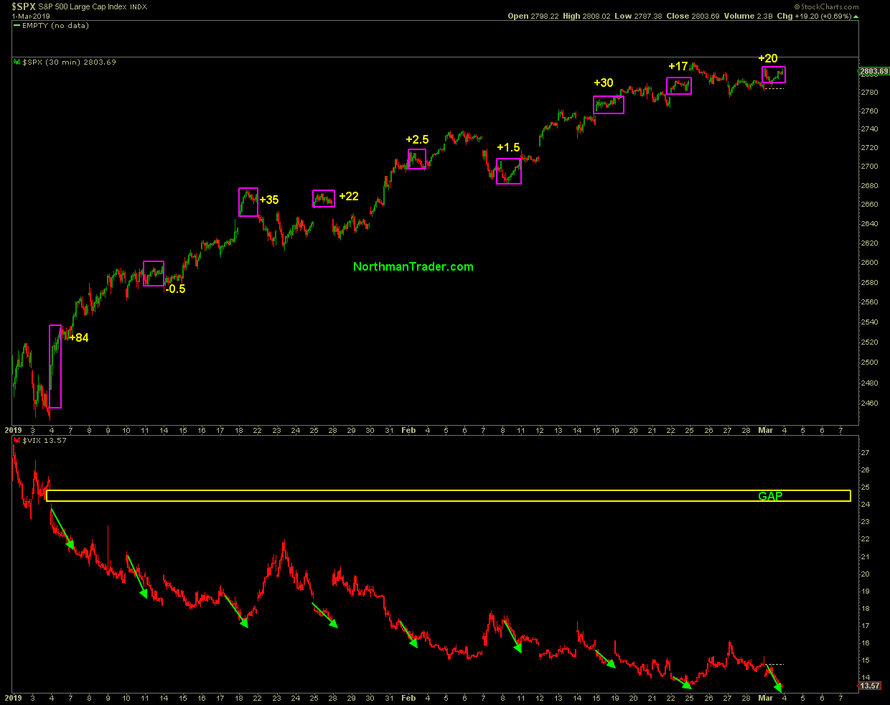 Indeed in the most recent weeks we can observe that markets make little progress during the week and most, if not all, gains for the week are coming via a magic overnight gap, ramp and camp on Fridays during which the $VIX is relentlessly crushed: 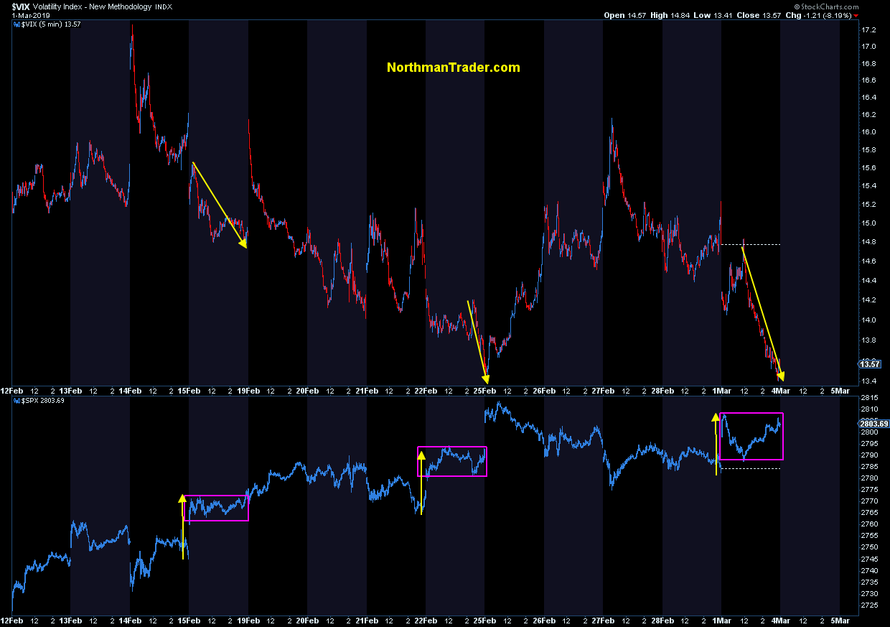 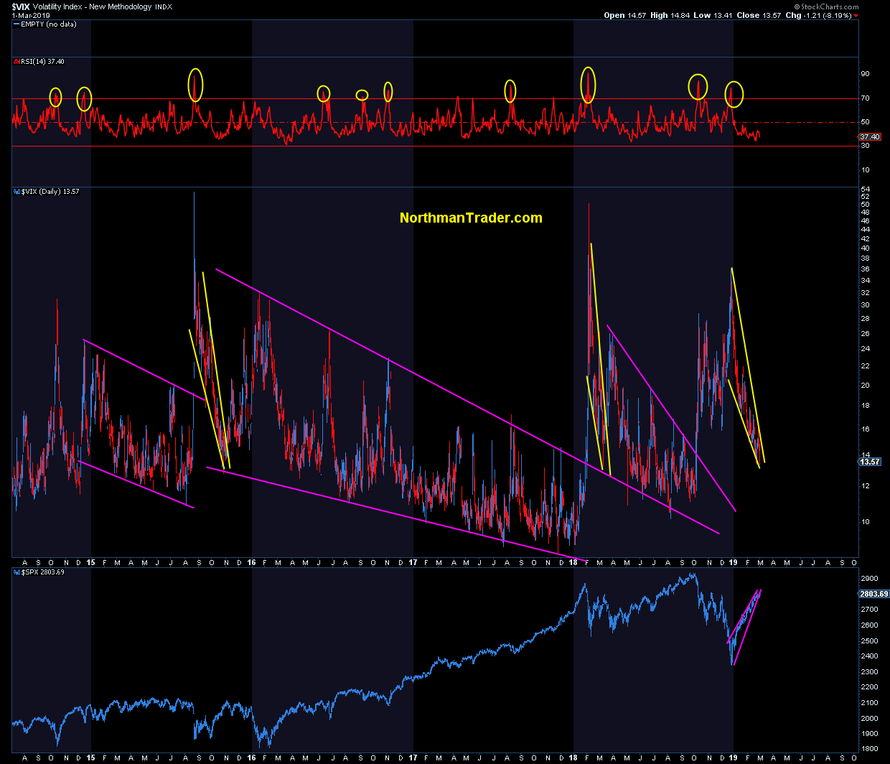 But note the program is weakening. Over the past couple of weeks I’ve been pointing to the 2800-2820 range as being key resistance. This week $SPX managed to squeeze to 2813 before reverting and trying again on Friday and closing at 2804. Note it takes an ever lower $VIX to eek out these gains. With a $VIX now at 13.5 and a big open gap at 24+ the $VIX is setting up for a rebellion.

I’ve outlined the pullback case on Thursday on Trading Nation:

Here’s the updated wedge on $DJIA as of Friday’s close: 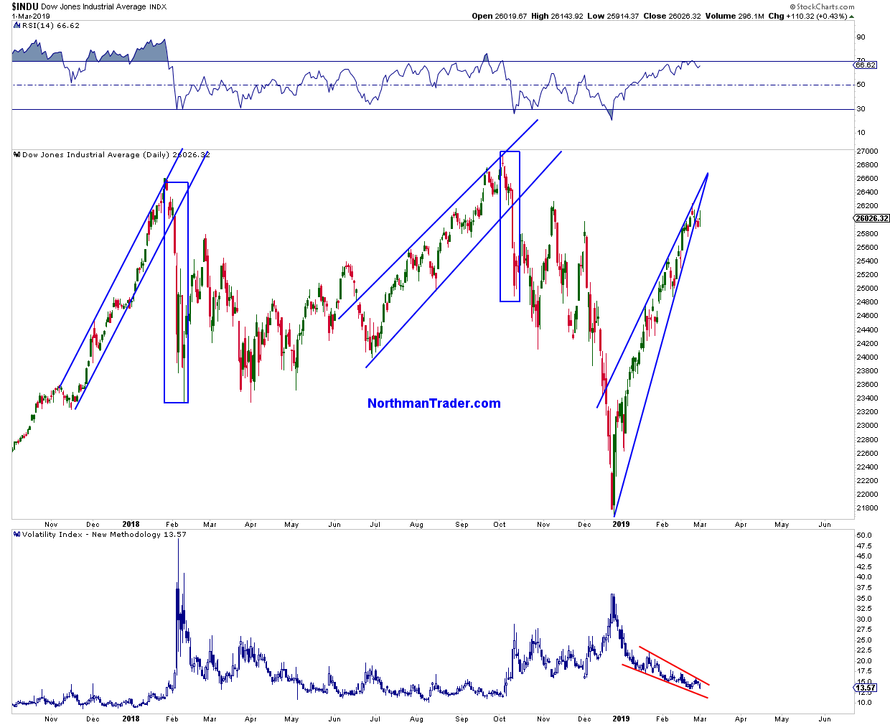 I repeat: This is not a pattern of a stable bull market. This remains a potential topping pattern of size. Bulls absolutely need new highs and this rally remains absolutely uncorrected, it is only after this rally gets tested that one can make some judgement calls about the true nature of this market.

We saw an initial break of the wedge patterns and a retest, but so far no breakout in volatility.

On $SPX we see a weakening in momentum as well and MACD has crossed over with plenty of room to go should a break confirm: 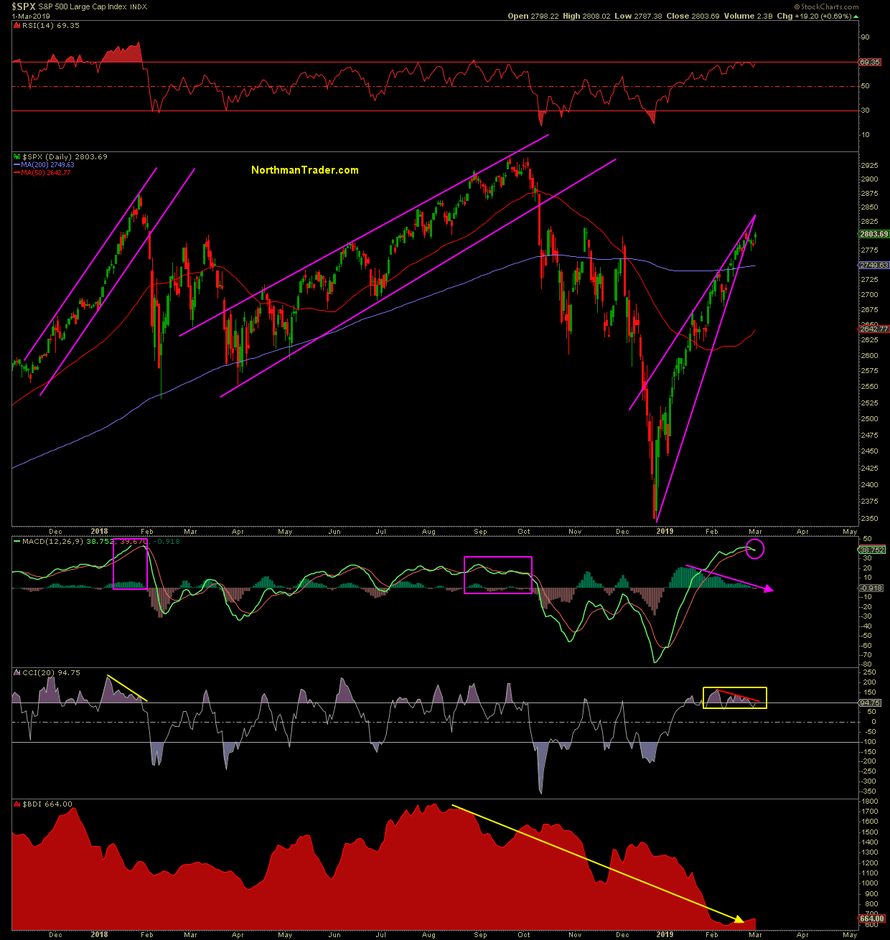 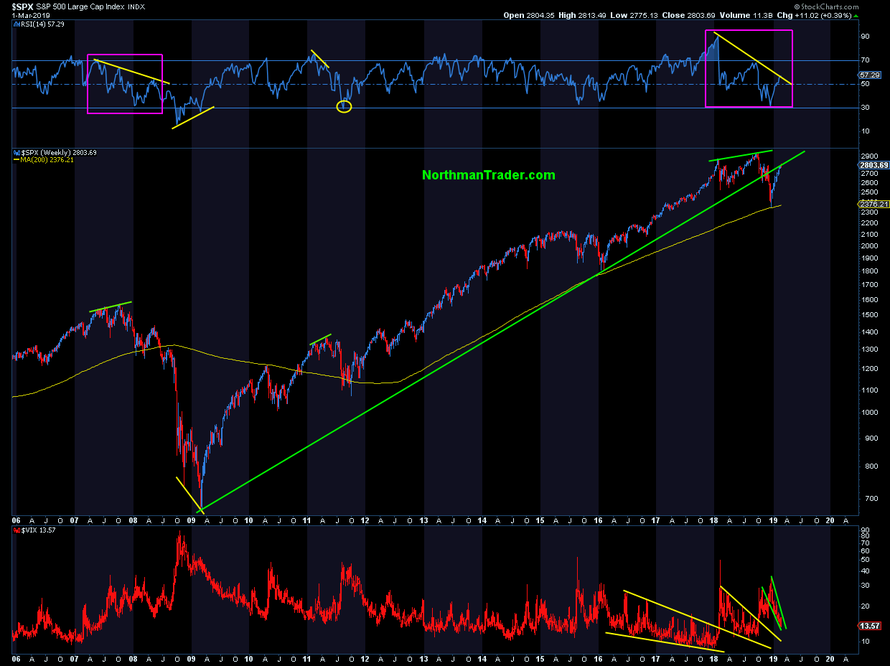 Note the repetitive nature of volatility compression patterns that lead to eventual breakouts of the $VIX.

I also note that there is a divergence between high yield credit and $SPX. For much of 2018 there was a direct relationship between $JNK and $SPX, if $JNK made new highs so did $SPX. Not this time. Thanks to the Powell cave $JNK exploded to new highs. $SPX has not. It’s a divergence: 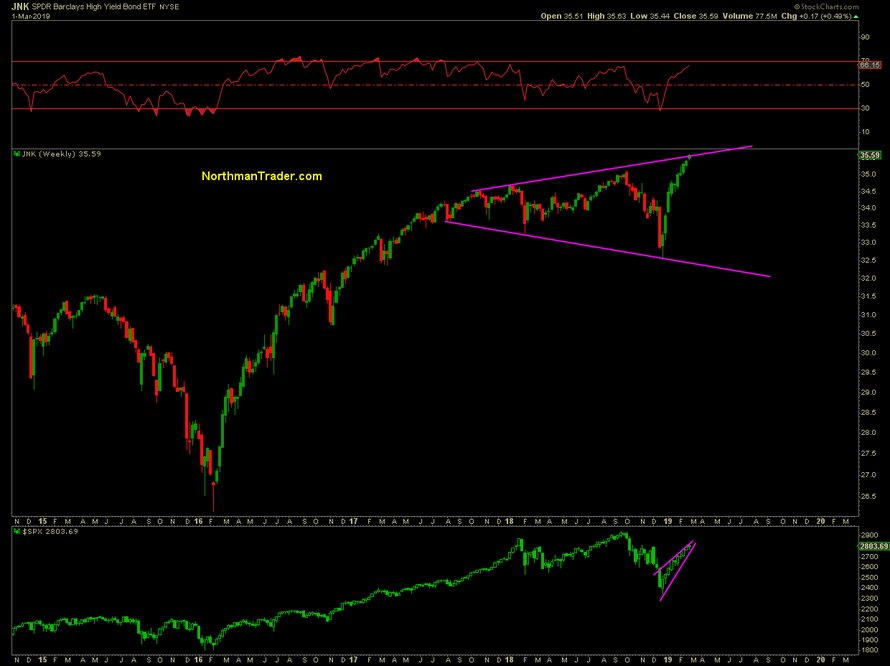 As I said last year in lead up to Lying Highs, divergences won’t matter until they do, but when they do they will have been a big warning flag and pack a punch. Bulls chose to ignore the divergences in September of last year and got hammered. They are ignoring them again, so strong is the faith in the Fed.

Indeed let’s just be honest here. Every single market strategist that’s coming out with bullish forecasts for the rest of the year and was bullish last year and is now bullish again all citing the Fed pivot:

Why? Because the Fed’s been the go to Daddy when junior gets in trouble for the past 10 years. So what if Q1 GDP is slowing to below 1%? So what if none of these strategists had predicted this steep slowing of economic growth? None had predicted an earnings recession, but now they all call it baked in. A temporary trough.

If that’s what happens, fine, but don’t call it value added analysis. Call it what it is: You got bailed out by the Fed again.

It’s a good gig I have to admit. Always predict higher prices and on the occasional ‘oops’ central banks step in again and one can look like a genius again:

And because this intervention game keeps working one has to give credence to the argument that indeed we’re simply seeing a repeat.

January and February were relentless jammed higher in price and before you know it you’re looking at a year where price discovery relentlessly drifts higher with the occasional emerging dips getting bought. After all who can forget 2013 under QE3: 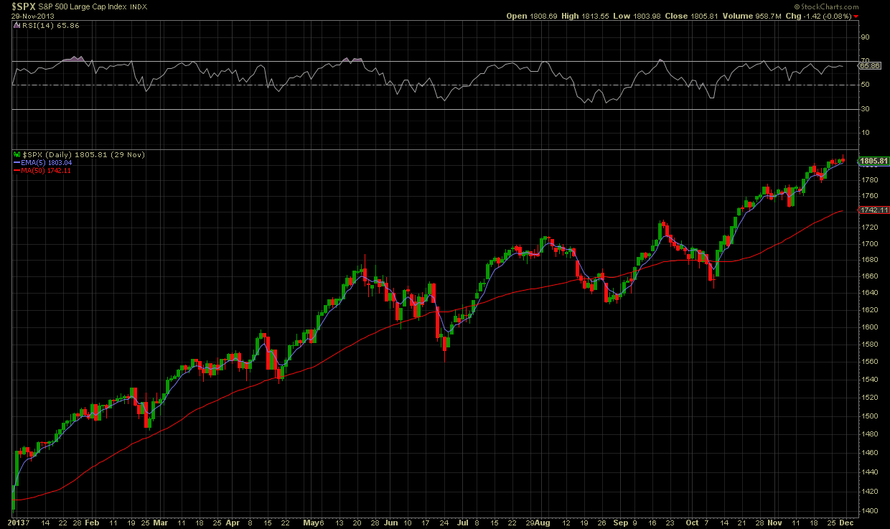 From my perch it remains too soon to make that presumption. As I’ve stated the rally needs to be tested first.

For now it remains massively overbought: 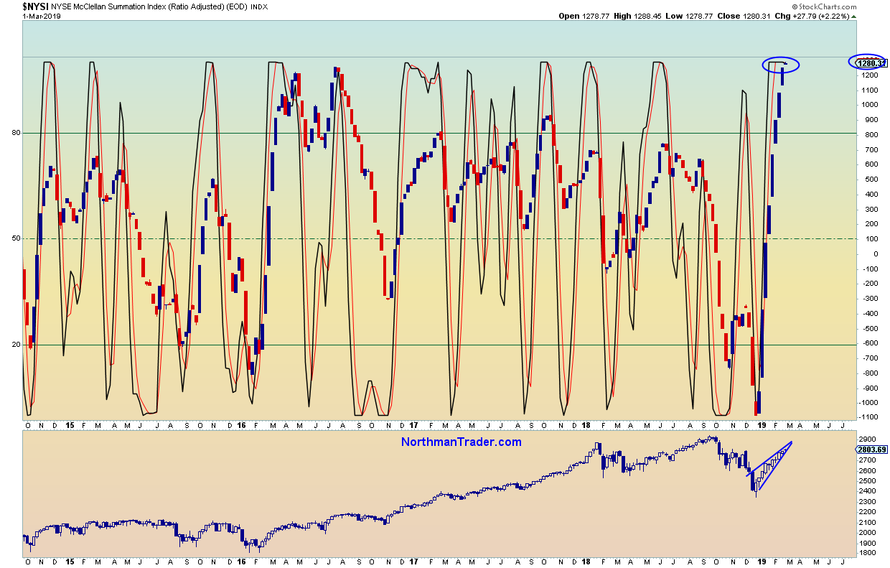 And the wedge patterns remain pronounced with negative divergences emerging, see here $BPSPX as another example: 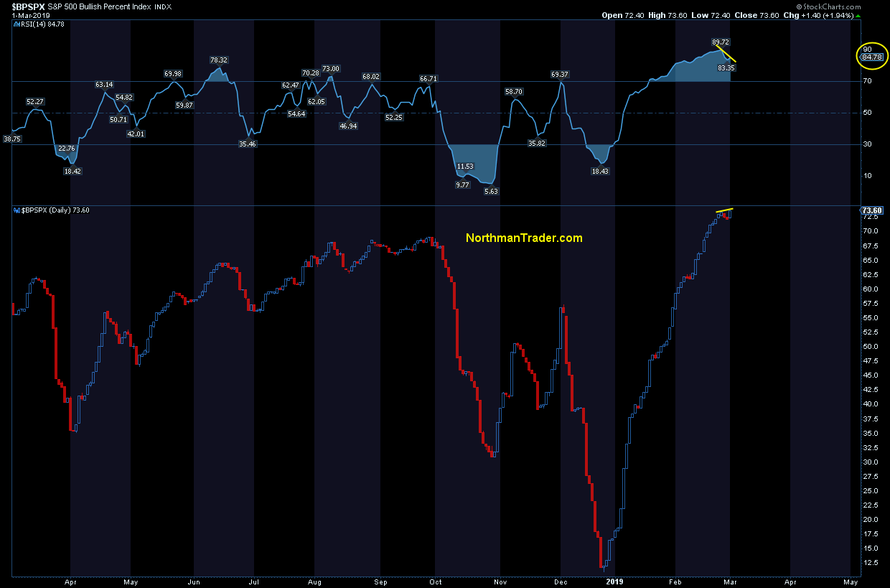 This past week we saw a black candle on $SPX:

Over the past year these subtle black candles signaled a coming test or end of the prior uptrends with moves either into the middle or lower Bollinger bands.

Given the massive size of the recent rally in connection with the many open gaps below fib levels signal the possibility of sizable retrace potential:

Any of these fib zones could offer support and renewed rallying points in the weeks ahead once a turn is confirmed.

Note I’m pointing out the 1.618 fib as a potential technical target zone should all this turn out to have been a bear market rally. 2006 $ES? Are you mad bro?

Not really. It would just constitute a technical retrace into the .382 fib of the larger 2009 rally: 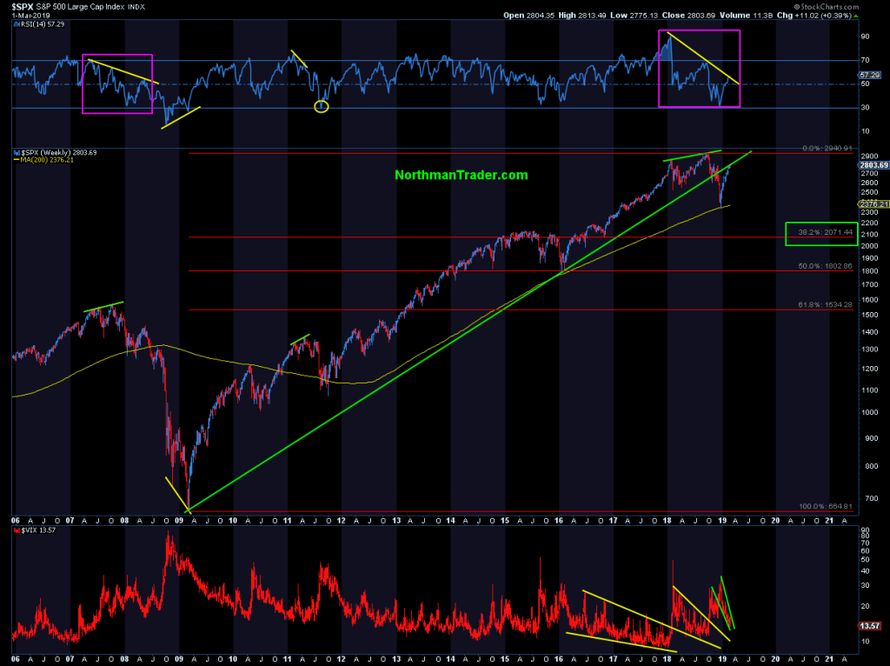 A bear market yes, but simply a technical correction in the larger context.

But only a break below the December lows would trigger this scenario, so it remains a theorem at this stage.

As per my TradingNation interview I expect the rally will get tested in sometime March. From my perch markets remain at high risk of a reversal at any time. March OPEX week tends to be bullish however and the weekly Friday $VIX execution remains in full force with a 100% track record so far in 2019. For now volatility compression rules, but warning signs are again abundant. Following March OPEX we are approaching quarter end and with it buybacks will slow to a halt as Q1 earnings are approaching. Perhaps then we will see what this market is truly made of.

In the meantime the Fed will remain sidelined and we’ll be told daily how much progress there is being made on a China deal and as long as that carrot keeps being dangled upside risk remains. Perhaps one day we will actually see a deal done, although the prospect of getting an undefined deal may prove to be more enticing than actually getting one. After all it’s easier to rally indefinitely on undefined hope as opposed to rally on established and ascertainable facts which may turn out to be a lot less enticing than the advertised hype.

We’ll see what Mr. $VIX has to say about all that. He sure is looking to have had enough of the weekly pounding.