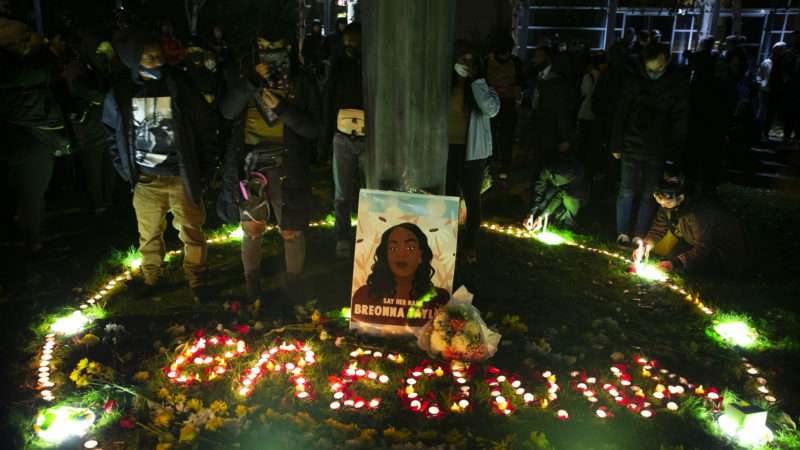 People around the United States took to the streets last night to memorialize Breonna Taylor and to protest a Kentucky grand jury’s decision not to indict three Louisville police officers for shooting her to death.

On Wednesday—six months after Kentucky cops executed a no-knock raid warrant at Taylor’s home in the middle of the night—a grand jury decided that criminal charges should be brought against only one of the officers involved in Taylor’s death. But rather than indict Louisville Metro Police Department (LMPD) Detective Brett Hankison for a charge related to killing Taylor, the jury decided to indict him on three counts of wanton endangerment in the first degree “for endangering her neighbors with wild shots,” as C.J. Ciaramella noted here yesterday.

Hankison was booked Wednesday and then quickly released on bail, and Louisville’s mayor ordered a curfew.

Welcome to Louisville. This used to be our downtown tourist trap. pic.twitter.com/ZqfsWPnoki

Kentucky Attorney General Daniel Cameron said the officers broke no law in killing Taylor, since her boyfriend, Kenneth Walker, had fired his gun at the strange men who broke down his girlfriend’s door while the couple was sleeping. “According to Kentucky law, the use of force[…] was justified to protect themselves,” Cameron said.

Cameron intentionally misled the public. And now this is going to be the narrative on the right going forward. It’s a narrative that blames Kenneth Walker, a decent man who is innocent, for the death of the woman he loved. It’s not just wrong. It’s also deeply unfair to him. https://t.co/hnJqghG0oq

Some people suggest we can’t know who’s telling the truth here about the police announcing themselves, since both Walker’s culpability and that of the police both hinge on this contested fact. And yet Walker’s actions are consistent with this story—he called 911 saying someone had broken into this house and shot his girlfriend.

Meanwhile, the cops’ application for a search warrant specifically says they are “requesting a no-knock entry to the premises.”

What’s up, y’all? On May 13 at 2:10 p.m. (EST), I requested a copy of the #BreonnaTaylor warrant from the Jefferson Circuit Court Clerk. They sent this, I spent ≈10 minutes redacting personal info, and then linked to my story. Share w/ the grifters and gaslighters in your feed. pic.twitter.com/zVcIEJk3Au

Only one of a dozen of Taylor’s apartment building neighbors said they may have heard the cops announce themselves before shots rang out.

Kenneth Walker’s attorney on CNN: The one witness Cameron said heard the police announce themselves initially claimed they did not. It took two more interviews before he said he may have heard them announce one time. Again, 11 other neighbors did *not* hear an announcement.

And even that neighbor’s tale is somewhat suspect, as criminal justice reporter and Rise of the Warrior Cop author Radley Balko points out.

If the Louisville police did decide—contra their search warrant—to announce themselves, then they obviously didn’t do it in a manner that was sufficient for Walker and Taylor to understand what was happening.

“I’ve been covering this stuff for nearly 20 years,” Balko tweeted. “I’ll never get over the ease with which cops go barreling into homes based on little, shoddy, or dirty information. It’s an insanely dangerous act with no margin for error and little to no consequences when someone dies.”

The essential backdrop to Taylor’s death and the system’s response is that things like this keep happening across the country. That doesn’t diminish blame for the particular police and government actors in this case, but it does indict a much broader system of reckless, unnecessary, and unaccountable policing, the absence of government checks and balances on that power, as well as the terrible laws and incentives that prompt this kind of policing in the first place.

“Until states ban the use of forced entry warrants for alleged drug crimes, we will continue to see more Breonna Taylors,” commented Lauren Krisai, senior policy analyst at the Justice Action Network. “There’s no public safety justification for allowing officers to forcibly enter someone’s home to enforce drug laws, even if they announce themselves beforehand.”

Easily 1000 protesters in NY blocking traffic in both directions as they cross the Manhattan Bridge. Someone yells at the double decker tourist bus, "Welcome to New York!" pic.twitter.com/rc4buwc8X9

Outside the Barclays Center in Brooklyn tonight @CBSNewYork #BreonnaTaylor pic.twitter.com/cWXA5bX2vF

Protesters march in #Oakland during a demonstration following a Kentucky grand jury’s decision not to charge any police officers with Breonna Taylor's killing. pic.twitter.com/fKQ3ZHdTxF

In a number of cities, police “deployed chemical agents” at crowds and ordered protesters to disperse. Police also arrested and charged protesters and journalists covering the protests.

At least 10 arrests tonight in ATL, some very violent. We're working to identify everyone and get them free. As always please contribute to https://t.co/8yXu1APLfz to help us keep up the support! pic.twitter.com/AFoTSbtVeZ

Police speakers in downtown Portland can be heard advising the crowd to leave the area which is now closed. A riot was declared. MORE: https://t.co/9uZ6EsooFi https://t.co/cbQnQkqfhV

Leave the area now and exit the street. Failure to adhere to this order may subject you to arrest, citation, or the use of crowd control agents including, but not limited to, impact weapons and/or OC munitions (Oleoresin Capsicum). Leave now.

Two fires are happening now near Jefferson Square, one is in a trash can. Police have deemed this an unlawful protest and asked protesters to leave @WLKY #BreonnaTaylor pic.twitter.com/fVTwh7BBNu

Officers have deployed pepper spray after protestors cut security cameras at the East Precinct. Protestors have moved into Cal Anderson Park. Safe exit from the park is to the West and North.

In Louisville, two police officers were shot and wounded while investigating gunshots in an area where police were corralling protesters and targeting them with pepper balls.

“Interim Louisville Police Chief Robert Schroeder said a suspect was in custody but did not offer details about whether that person was participating in the demonstrations,” reports AP:

He says both officers are expected to recover, and one is undergoing surgery. He says the officers were shot after investigating reports of gunfire at an intersection where there was a large crowd.

Several shots rang out as protesters in downtown Louisville tried to avoid police blockades, moving down an alleyway as officers lobbed pepper balls, according to an Associated Press journalist. People covered their ears, ran away and frantically looked for places to hide. Police with long guns swarmed the area, then officers in riot gear and military-style vehicles blocked off roadways.

It’s fucked up this has to be requested https://t.co/iRjcWL75EX

Hong Kong activist Joshua Wong was arrested. He’s reportedly charged with violating an anti-mask law… in a city where masks are now mandatory.

#BREAKING Joshua is arrested when reporting to Central Police Station at about 1pm today. The arrest is related to participating in an unauthorized assembly on 5Oct last year. He is told to have violated the draconian anti-mask law as well.

Hong Kong leader Carrie Lam tried to ban face coverings at public gatherings last year, a move she hoped would quell unrest on the streets but instead added fuel to the pro-democracy movement and charges that she was abusing her power. A court later ruled that the mask ban, which was enacted using colonial-era emergency powers, was partially unconstitutional.

Since the pandemic, Hong Kong has enacted laws mandating that residents wear masks in all public places to curb the spread of the coronavirus.

Checking in on the TikTok deal. From TechCrunch:

The September 20 deadline for a purported TikTok sale has already passed, but the parties involved have yet to settle terms on the deal. ByteDance and TikTok’s bidders Oracle and Walmart presented conflicting messages on the future ownership of the app, confusing investors and users. Meanwhile, Beijing’s discontent with the TikTok sale is increasingly obvious.

China has no reason to approve the “dirty” and “unfair” deal that allows Oracle and Walmart to effectively take over TikTok based on “bullying and extortion,” slammed an editorial published Wednesday in China Daily, an official English-language newspaper of the Chinese Communist Party.

• “Caring about children doesn’t mean sharing lurid memes about the monster lurking around the corner. It means being honest about what truly puts children at risk — even if the solution requires doing something we should have done years ago”: at HuffPost, “You’re Wrong About” podcaster Michael Hobbes takes a very good and thorough look at “the futile quest for hard numbers on child sex trafficking.”

• More research casts doubt on the idea that many people with COVID-19 will not develop symptoms.

• Florida reacts to Democrats raising money to pay off court fines and fees that are preventing people from being allowed to vote:

If I understand the state of Florida's position here, it is: "These fines have nothing to do with voting, so they can't be a poll tax. But if you help people pay them off, you're interfering illegally in an election." https://t.co/s6DFO3e2Cu

• Maine will try ranked-choice voting in the presidential general election!

• A new poll from The New York Times and Siena College shows President Donald Trump “on the defensive in three red states he carried in 2016, narrowly trailing Joseph R. Biden Jr. in Iowa and battling to stay ahead of him in Georgia and Texas, as Mr. Trump continues to face a wall of opposition from women that has also endangered his party’s control of the Senate.”

• The Los Angeles Times editorial board rejects California’s Prop 22, “which would classify drivers for app-based services such as Uber and Lyft as independent contractors but guarantee them certain benefits.”

• A good explainer on some of the problems with the Department of Justice’s proposal to amend Section 230, from Julian Sanchez of the Cato Institute. Start here:

Here’s an irrational thing about the assault on §230 that I haven’t seen emphasized enough. You can’t actually forbid platforms employing their judgment to curate (or “censor”) content. That’s protected by the 1st Amdt, not §230. So nobody who knows anything is arguing that.

from Latest – Reason.com https://ift.tt/2G2tYCm
via IFTTT