I see the world is fearless again. The higher we go the more bullish people become. The same people that were bullish (and wrong) last year are bullish again and as prices rise relentlessly everybody is a genius again. 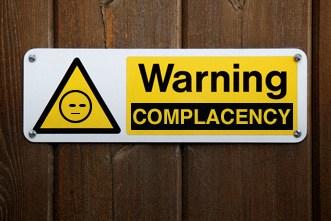 Central banks don’t filter into the analysis otherwise one would have to admit that that’s what it’s all about. Bad data doesn’t matter because stocks go up. A China deal will be positive and a catalyst to buy stocks. If there is no real China deal a cosmetic one is good enough. Since bad data doesn’t matter any good data is bullish too. In short bad news is good news and good news is good news.

It’s blind faith in a system that never has to face any consequences as the central bank put reigns supreme.

And you know what? It may all turn out to go that way. I’ve asserted, with data, for a long time that central banks remain the biggest price driver of everything and they’ve just shown their power once again. But I’m not there yet, the point of throwing my hands up in the air because that’s what everybody seems to do. Why? Because of the charts and a, I think, well founded belief that structural forces matter, and that these unelected, unaccountable, economists who are constantly wrong about their projections are at the cusp of losing control of their rather dishonest narratives.

As it stands everybody is bullish again with nothing but upside targets:

New highs are coming is now the predominant narrative.

To be clear: Macro is much worse than last year, but they’re in essence projecting the same targets as they did last year. The only real difference is dovish central banks. Oh and nearly 23% of global debt ($11 trillion) is now trading at negative yields, that’s up from 21% in October. Just ignore it. TINA is back and everything is well.

Look, we can’t go by what other people say. We go by what our analytical output says and that has us currently on a very contrarian path which is not easy, but then it never is.

And what the charts tell me is that the this renewed phase of $VIX compression and market complacency is not going to last and that there will be at least one larger volatility scare in 2019 and potentially a lot more. But let’s stick with the here and now for the purpose of this article.

$RUT, still hasn’t tagged its 200MA, RSI remains vastly overbought and its underlying volatility pattern ($RVX) remains in a massive wedge which is bullish volatility and highly suggestive of a trouncing to come: 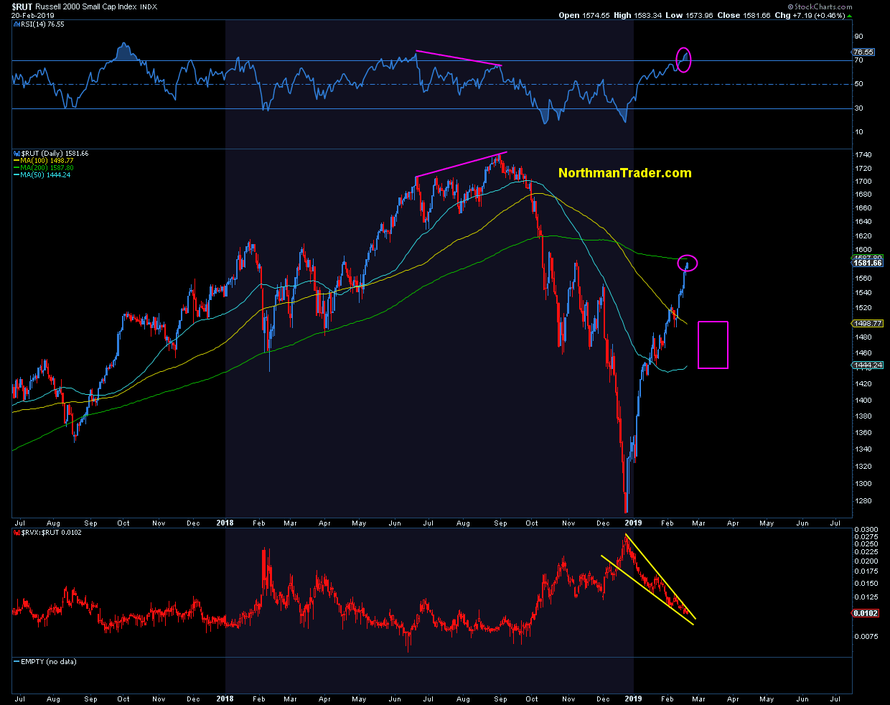 Once a pullback commences the size of the volatility wedge suggests an initial retrace target toward the indicated MA zone. What happens from then and there will have to be assessed then.

But note how unusual this current “V” recovery is in context of the $RUT correcting deeply as it did in December. 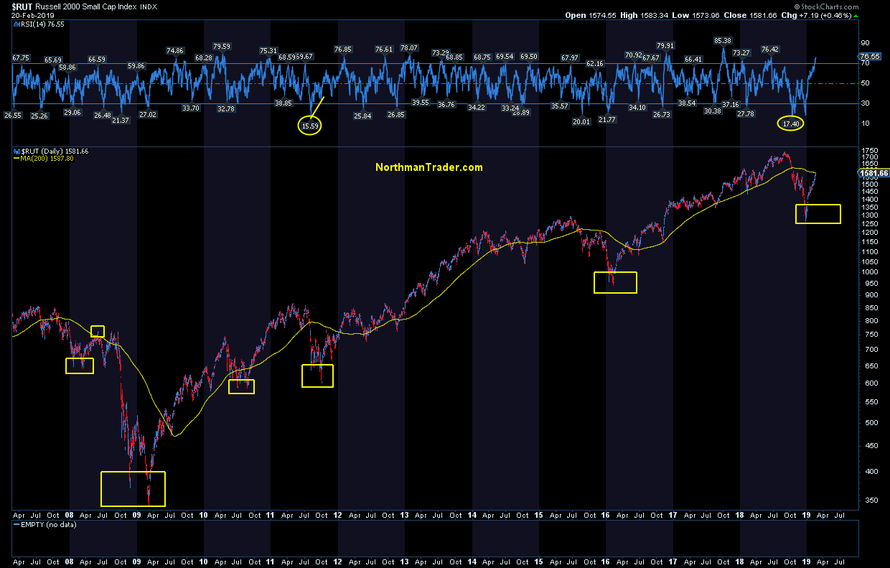 Clearly this hasn’t happened as of yet and, if central banks remain in control, we may not, but this volatility compression in context of $RUT still being below its 200MA is highly abnormal.

Indeed the $RUT volatility index is not the only one showing a compression wedge pattern:

Here’s the $VIX versus $SPX: 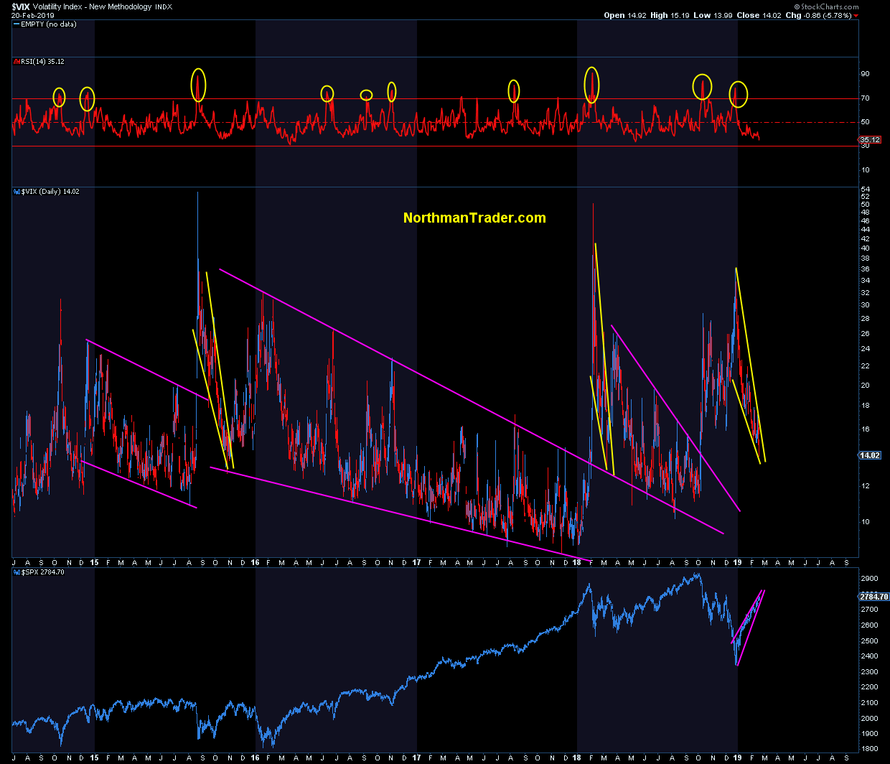 A repeat in 2019 would ironically target an open gap on the $VIX: 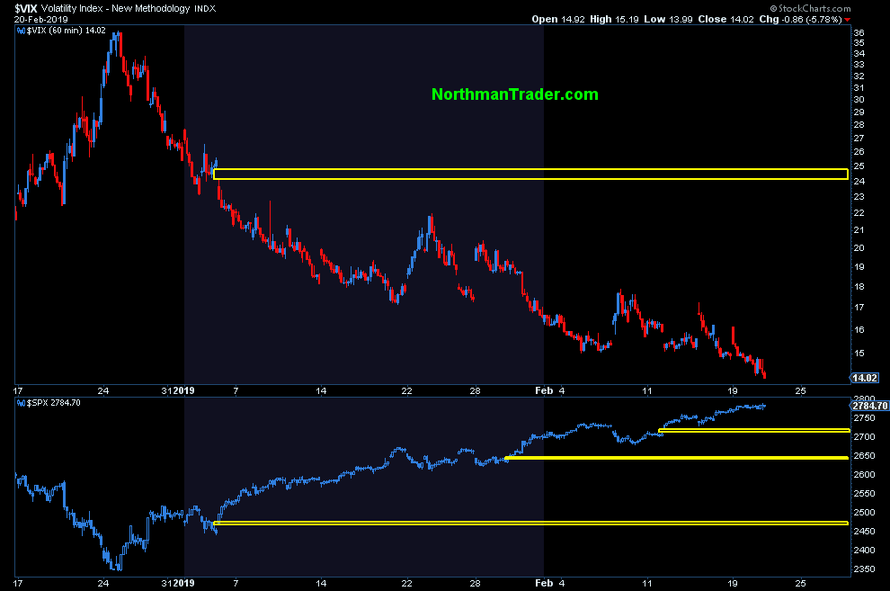 What’s the pattern evidence for such a move? Look no further than last year: 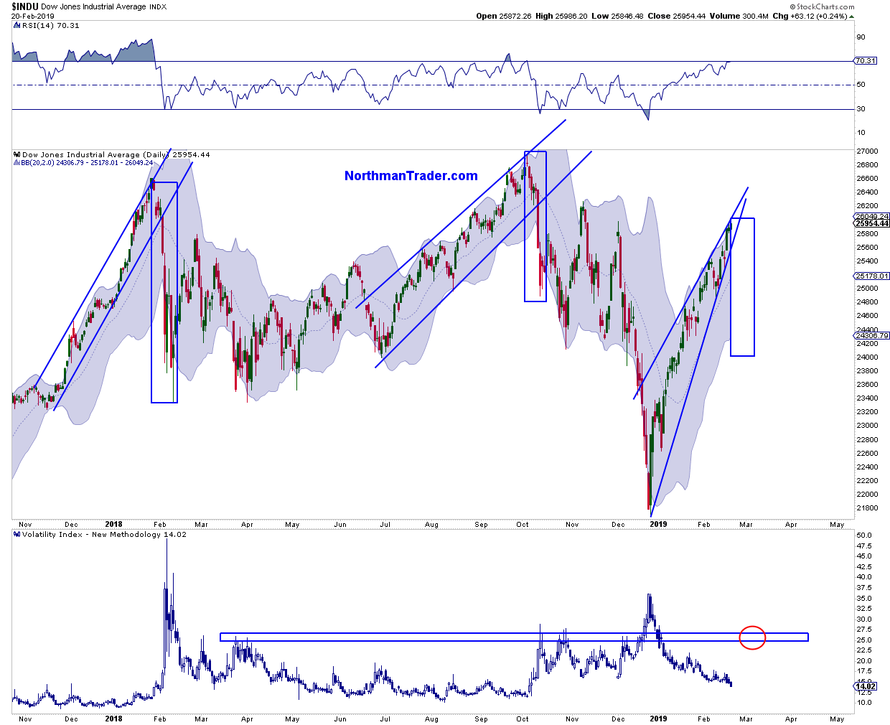 Complacency may be rampant right now 9 weeks into this rally, but the charts and patterns suggest a larger volatility spike is yet to come in the weeks ahead.