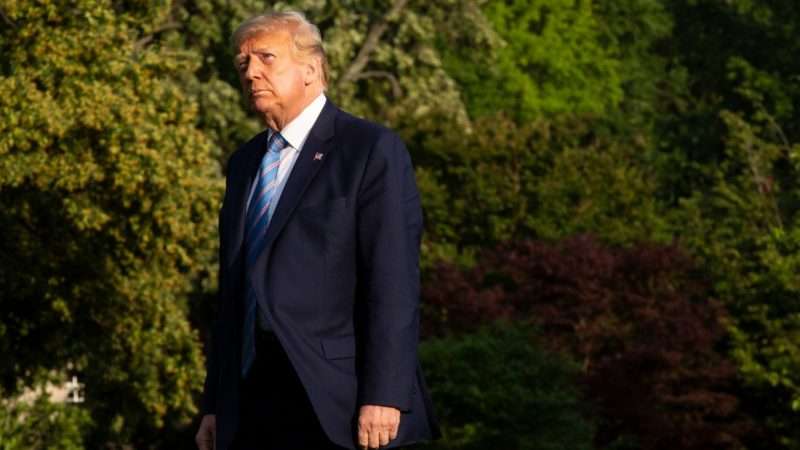 Asked by Fox News host Sean Hannity last Thursday to detail his top priorities for a second term in the White House, President Donald Trump descended into an incoherence remarkable even by his standards. At the end of the ramble, though, he said something interesting: “I have great people in the administration. You make some mistakes. Like, you know, an idiot like [former National Security Adviser John] Bolton. All he wanted to do was drop bombs on everybody. You don’t have to drop bombs on everybody. You don’t have to kill people.”

That bit about Bolton, excised from the babble preceding it, has the seed of an idea that really would make a historic second term: Stop bombing people. Make good, finally, on your promise to end our endless wars.

This idea has three strengths for a second-term agenda. Most important—and likely least appealing to a man who revels in militarism, enthuses about torture, gets giddy over explosives, and both proposes and facilitates war crimes—is that it would be an overdue act of peace.

The United States has been floundering in Afghanistan for 19 years. We have been bombing Iraq since 2003, Pakistan since 2004, Somalia since 2007, Libya since 2011, Syria since 2014, and Yemen since 2015. Smaller U.S. military interventions—it is so difficult to know what to dub a “war” anymore—are ongoing in various African nations. U.S. bases pepper the Middle East, with thousands of troops at the ready to initiate, escalate, or stumble into conflict. These wars do nothing to help the United States and much to harm ordinary people who have the misfortune to live where Washington decides to fight.

American withdrawal from these conflicts would not spell their immediate end. But U.S. exit is a necessary condition for peace, even if it isn’t a sufficient one. The past two decades have made it inescapably clear that Washington’s military meddling cannot resolve the region’s political, religious, and cultural problems. Prolonging these wars only adds to the region’s suffering and chaos.

The second strength of Trump’s anti-bombing comment is its achievability. Speaking of constitutional procedure in Washington is increasingly farcical, but the president’s constitutional role as commander-in-chief does include the authority to end wars. The power to initiate conflict is given to Congress with the intent of slowing reckless rushes to violence, but there are no such barriers to ending military actions once initiated. Trump can stop bombing everybody at any moment of his choosing. He can withdraw troops whenever he likes. He could get started now—why wait for a second term?

That brings us to the idea’s third strength: It would make Trump’s many professions of interest in reforming American foreign policy into truths instead of indefensible lies. Like the three presidents before him, Trump pays lip service to restraint in U.S. foreign policy. He criticizes the length, cost, and humanitarian consequences of our wars. He promises to bring American forces home, to negotiate great treaties, to abandon futile nation-building projects.

And he does none of that. Trump has not ended a single war he inherited from his predecessor. He has escalated the war in Afghanistan, dropping a record number of bombs in 2019 (after setting a previous record in 2018). Afghanistan’s civilian, military, and police casualties are all at record highs as well. In drone warfare, Trump has found a signature Obama administration program he does not oppose; on the contrary, as The American Conservative‘s Daniel Larison reports, his “administration has significantly increased the tempo of drone strikes in a number of countries, and it has relaxed the rules governing the targeting of these strikes.” In Yemen, Trump has pushed past bipartisan congressional and public opposition to keep facilitating the horrific Saudi-led intervention.

This is the opposite of not bombing everybody. More bombs are falling. More innocent people are being killed.

Trump has always sent mixed messages on matters of war and peace. Part of him sees war as a drain on American resources, a distraction from domestic issues, and an opportunity to showcase his self-declared deal-making expertise in its resolution. This is the Trump who says, “Great nations do not fight endless wars.” But part of him—apparently most of him—is bloodthirsty, self-serving and mercurial, petty and short-sighted, easily swayed by bad advice, and infatuated with the most garish displays of military might.

That Trump, the vengeful Trump who is angry the arch-hawk Bolton has publicly embarrassed him, is the Trump whose jabbering to Hannity accidentally stumbled into a good second-term priority while casting about for something Bolton would not like.

It’s a shame that that’s all his comment appears to be. A president who spent four years not killing people would be an extraordinary president indeed.

from Latest – Reason.com https://ift.tt/3g9tmY9
via IFTTT