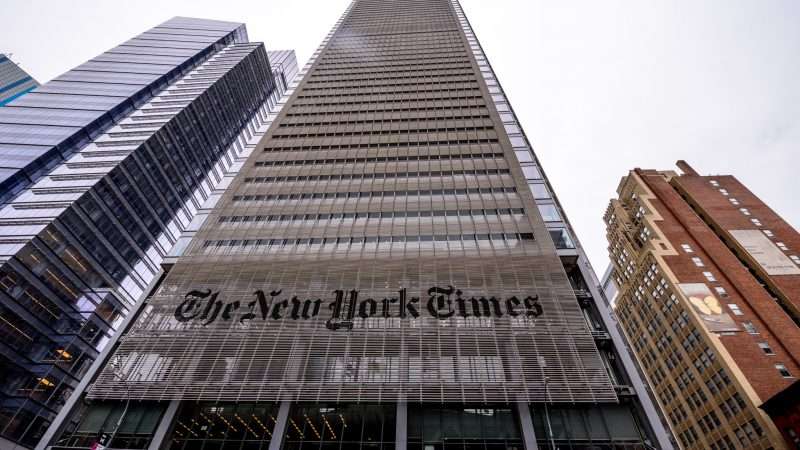 Back in June, pseudonymous blogger Scott Alexander deleted his blog—Slate Star Codex—after The New York Times threatened to reveal his identity in what was supposed to be a largely positive article about Alexander’s early perceptiveness regarding the threat of COVID-19. The incident prompted Alexander to migrate to Substack and out himself as the clinical psychiatrist Scott Siskind (though his true name was already discoverable via Google).

I criticized The New York Times for its unwillingness to grant Siskind anonymity, especially given the paper’s recent history of honoring such requests in roughly analogous situations. While that decision struck me as unfair—or at the very least inconsistent—and it was deeply unfortunate that it had created so much bad blood between the Times and Siskind (whose loyal readers bombarded Times reporter Cade Metz with complaints), I nevertheless expected that the story itself would be balanced and informative if it ever saw the light of day.

It turns out that this was a naive assumption.

On Saturday, the Times finally published Metz’s profile of Slate Star Codex. It’s a lazy hit piece that actively misleads readers, giving them the false impression that Siskind is at the center of a stealth plot to infiltrate Silicon Valley and pollute it with noxious far-right ideas. Unfortunately, this theme—that new tech ventures are sources of right-wing disinformation—is becoming endemic to the paper’s increasingly panicky tech coverage, which cynically treats all new electronic conversation spaces as potential disinformation incubators.

According to Metz, Slate Star Codex was first and foremost “Silicon Valley’s Safe Space,” which is the absurd title of the piece. This gives the impression that Siskind primarily spends his time flattering venture capitalists, tech startups, and coders, which could not possibly be further from the truth.

Here are the first five paragraphs of the article:

The website had a homely, almost slapdash design with a light blue banner and a strange name: Slate Star Codex.

It was nominally a blog, written by a Bay Area psychiatrist who called himself Scott Alexander (a near anagram of Slate Star Codex). It was also the epicenter of a community called the Rationalists, a group that aimed to re-examine the world through cold and careful thought.

In a style that was erudite, funny, strange and astoundingly verbose, the blog explored everything from science and medicine to philosophy and politics to the rise of artificial intelligence. It challenged popular ideas and upheld the right to discuss contentious issues. This might involve a new take on the genetics of depression or criticism of the #MeToo movement. As a result, the conversation that thrived at the end of each blog post — and in related forums on the discussion site Reddit — attracted an unusually wide range of voices.

“It is the one place I know of online where you can have civil conversations among people with a wide range of views,” said David Friedman, an economist and legal scholar who was a regular part of the discussion. Fellow commenters on the site, he noted, represented a wide cross-section of viewpoints. “They range politically from communist to anarcho-capitalist, religiously from Catholic to atheist, and professionally from a literal rocket scientist to a literal plumber — both of whom are interesting people.”

The voices also included white supremacists and neo-fascists. The only people who struggled to be heard, Dr. Friedman said, were “social justice warriors.” They were considered a threat to one of the core beliefs driving the discussion: free speech.

We’re not even a quarter of the way through the article, and we’re already being warned that SSC was some sort of freewheeling haven for white supremacists, as if that is one of the most significant things about the blog. It’s an accusation that Metz does not even begin to prove—the best he can do is point out that SSC linked to the blog of Nick Land, a British philosopher “whose writings on race, genetics and intelligence have been embraced by white nationalists.” But before his neo-reactionary turn, Land was primarily known for writing about A.I., so this is rather thin evidence.

If this was the only weird slip up in the article, it might have been forgiven. But Metz works very deliberately to tie Siskind to other thinkers who have espoused controversial views—and does so in a manner suggesting Siskind shares them. Consider this reference to Charles Murray, the former American Enterprise Institute scholar whose writings on race and intelligence have often garnered protests on college campuses:

In one post, [Siskind] aligned himself with Charles Murray, who proposed a link between race and I.Q. in “The Bell Curve.” In another, he pointed out that Mr. Murray believes Black people “are genetically less intelligent than white people.”

Similarly, Metz draws a link between a Siskind post, “Gender Imbalances Are Mostly Not Due To Offensive Attitudes,” and the internal memo penned by former Google employee James Damore which resulted in the latter’s termination.

“That week, a Google employee named James Damore wrote a memo arguing that the low number of women in technical positions at the company was a result of biological differences, not anything else — a memo he was later fired over,” writes Metz. “One Slate Star Codex reader on Reddit noted the similarities to the writing on the blog.”

“Biological differences, not anything else,” is a remarkable mischaracterization of Damore’s memo. As Reason contributor Jesse Singal points out, Damore qualified his claims throughout the infamous memo with language like “may in part explain” and “differ in part.” To the extent that the Damore memo and the Siskind post are similar, it is that they manifestly do not make the strong claims that Metz suggests they do.

Ah, but as Siskind “explored science, philosophy and A.I., he also argued that the media ignored that men were often harassed by women” and “said that affirmative action was difficult to distinguish from “discriminating against white men.” These are the sorts of things that are apparently supposed to shock Times readers, though the former is certainly true and the latter is not a particularly uncommon opinion.

Even trying to defend these past writings is sort of playing Metz’s game, because the whole point of his article is to tar Siskind as a right-wing contrarian. While he occasionally expresses ideas that are agreeable to right-wing people and/or libertarians and/or those who don’t fit neatly into the Times‘ ideological boxes, overwhelmingly SSC was a liberal blogger associated with the rationalist community, holding liberal views on most important social issues. (For an overview of what rationalism is, you should probably just read Matt Yglesias’ explanation of all the things Metz’s article got wrong about SSC.)

Indeed, something that Siskind has written about—and that the rationalist community would tend to agree with—is the idea that donating even a small amount of money to impoverished people in third-world countries is a much more efficient way to combat racism than participating in Black Lives Matter activism. This may be controversial because it clashes with a pro-signaling mindset that is so stylish among modern progressive activism and elite media members, but it is hardly a conservative or right-wing opinion.

One starts to get the feeling that the Times simply wants to tarnish every view that exists outside its own narrow purview, perhaps because the Times has appointed itself the gatekeeper of the unsayable and resents having to relinquish this role to newer media ventures.

“Slate Star Codex was a window into the Silicon Valley psyche,” writes Metz. “There are good reasons to try and understand that psyche, because the decisions made by tech companies and the people who run them eventually affect millions. And Silicon Valley, a community of iconoclasts, is struggling to decide what’s off limits for all of us.”

The idea that a clinical psychiatrist’s blog is the embodiment of Silicon Valley’s psyche is very odd, probably wrong, and at the very least unproven throughout the article. But notice the grander concern: A community of iconoclasts is struggling to decide what’s off-limits for all of us. What the Times actually means is that not enough speech is being rendered off-limits: The new gatekeepers are not nearly as interested in policing strict boundaries.

Many members of the media, including and especially those who report on tech, fret constantly about the potential for inaccurate speech to appear on social media. Their complaints frequently expose their own biases: Times tech reporter Kevin Roose once tweeted that “Facebook is absolutely teeming with right-wing disinformation right now,” and linked to four news stories that had attracted significant web traffic on the platform. But the headlines of all four were accurate, as Roose later conceded—a particularly powerful example of an emerging phenomenon in which journalists label something as disinformation or misinformation, not because it is false, but because they don’t want the American public to hear or read it.

The problem is not remotely confined to the Times: See the recent freakout over Clubhouse, a new invitation-only social media app that allows users to participate in group voice calls. “Live audio and no recording might complicate the work of fact-checkers on this new platform,” worried the Poynter Institute.

Vice echoed these concerns, noting that, “Unlike Twitter, Facebook or Instagram, where users leave a digital footprint in the form of text, images or videos, the conversation is wiped once a room closes, making it almost impossible to hold people accountable for their words.” This exact feature probably makes Clubhouse less susceptible to viral misinformation than the other mentioned platforms, but never mind: Someone, somewhere is possibly saying something that’s wrong, and journalists are extremely worried you might hear it before they can protect you.

It’s difficult to tell how much of this impulse is guided by genuine moral panic and how much is cynical industry rivalry, since social media is in some sense a competitor to traditional media. But whatever the cause, journalists do their readers a disservice when they treat everything that’s new, different, slightly heretical, or out-of-step with rigid media expectations as dangerous. To the extent that the Times left readers with the impression that Siskind is primarily a right-wing contrarian—and Silicon Valley’s intellectual man-behind-the-curtain to boot—it is actually the paper of record that has spread misinformation.

(For more on this subject, you can preorder my forthcoming book, Tech Panic: Why We Shouldn’t Fear Facebook and the Future.)

from Latest – Reason.com https://ift.tt/3ajSawu
via IFTTT