Authored by Ryan Opsal via OilPrice.com,

Considering the established political imperatives underpinning the German energy transition (Energiewende) and the overall push toward greater use of renewables in the energy mix, let’s look at some of the outcomes of this transition – specifically natural gas imports from Russia and fossil fuel consumption.

A boost in renewables would carry these two ostensible goals, and it’s worthwhile to gauge progress in both areas.

In these scenarios, it’s beneficial to look at the end-use of primary sources of energy, to understand how Germany is ultimately using its energy. So instead of production data, the focus will be on consumption.

For example, as we’ll cover later, Germany produces a lot of renewable energy, but it doesn’t consume all that energy, and therefore will not have any fundamental impact on the consumption mix.

BP’s statistical workbooks (data used in this article is sourced from BP’s 2017 Statistical Workbook unless otherwise noted) provide good time-series data that can be used to understand Germany’s transition in this context.

The following graph draws on BP’s data and furnishes a good look at energy consumption in Germany, going back to 2000. 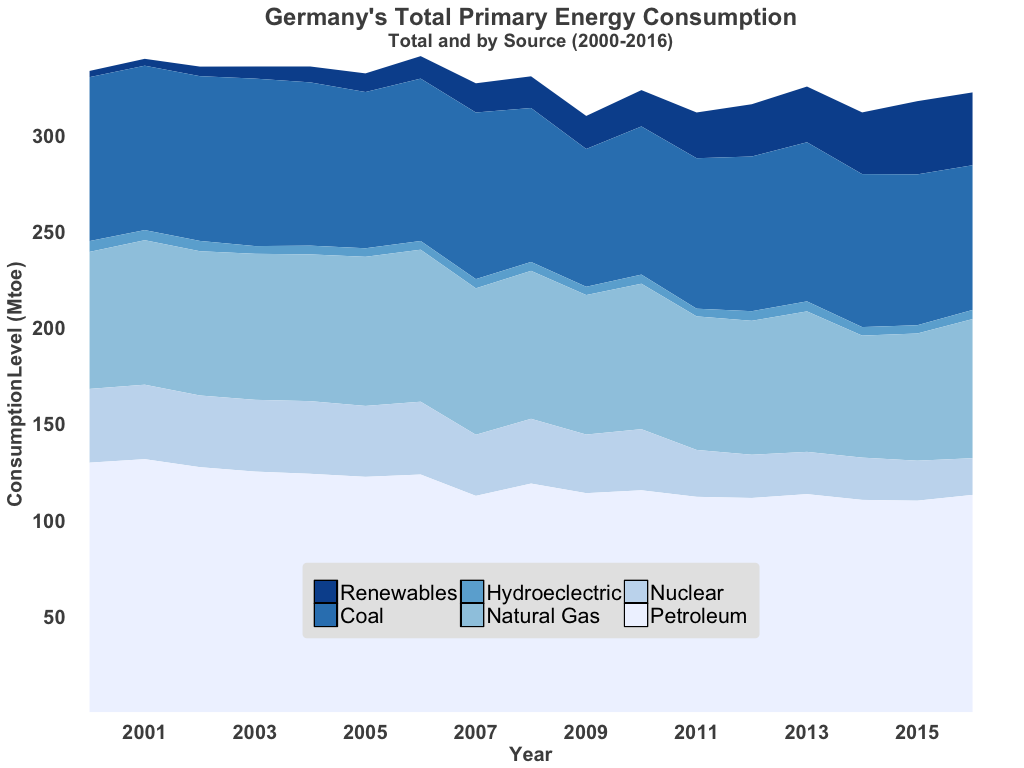 In specific areas, Germany has been successful in meeting its objectives, and this appears to be at least partially due to increases in the production and consumption of renewable sources of primary energy.

There is still quite a discrepancy, however, between Germany’s production of renewable energy, and its consumption…

Around one-third of the energy produced in Germany in 2016 was from renewable sources, but only 12 percent of the energy consumed in the same year was from renewables, creating a gap of 23 percent. This is attributed to both exports and waste, as the distribution network simply cannot keep up with production surges, although progress is being made on this issue.

For instance, it was recently reported that on January 1, 2017, Germany met, for the first time, 100 percent of its consumption needs through renewable sources of energy, with wind providing approximately 85 percent of national demand.

As noted in both the graph above and the pie charts below, the other notable change since 2000 is the reduction in the use of nuclear power.

The data demonstrate a dramatic 23 percent decline in nuclear power consumption from 2010 to 2011 from 31.8 Mtoe to 24.4 Mtoe, following the immediate closure of several nuclear power plants throughout the country, and reduced output from the remaining plants.

After the CDU and FDP agreed to extend the use of nuclear plants in 2009, the decision was immediately reversed following the disaster at the Fukushima power plant in Japan, closing several plants within a month, and reducing the output of the remaining plants.

The general population in Germany has been wary of operating nuclear power plants since the Chernobyl disaster, and the recent shuttering of these facilities has enjoyed widespread public and political support. Over this entire period, from 2000 to 2016, nuclear power consumption dropped by a full 50 percent.

Following nuclear energy, the second most significant reduction in power generation over this period is from petroleum, although it still makes up the largest share of the energy consumed in Germany since 2000 and has maintained relatively stable levels over the 17-year period.

Over 50 percent of the increase in renewables over this time has gone to cover reduced generation and consumption of nuclear power, and the rest of that growth covers the reductions in the use of petroleum.

Overall, the data demonstrate slight decreases in coal and petroleum consumption, while the use of natural gas is mostly flat. 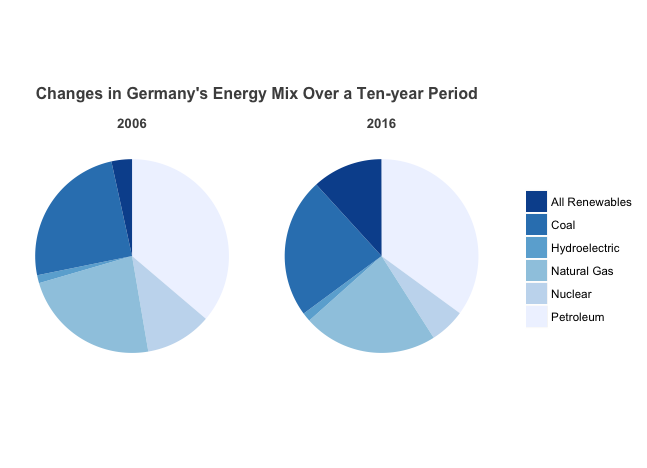 Due to the significant drop in nuclear power consumption, Germany has been unable to reduce fossil fuel consumption as much as previously hoped. This shortfall is especially the case with natural gas, which has been a central cause for concern given the political leverage held by massive Russian exports to Germany, and to the European Union more broadly. On this issue, progress has been limited, and seems to be getting worse.

As the table below demonstrates, Russian natural gas exports to Germany are only increasing, and show no signs of abatement, mirroring anecdotal reports and the steady progression of the Nord Stream 2 pipeline.

Total imports, including those from Russia (except a 2011-2012 decrease due to supply diversions resulting from extreme cold weather), have increased while both domestic production and consumption have decreased.

In 2016, Germany sourced over 46 percent of its natural gas imports from Russia, up from 40 percent in 2006. The other two key suppliers, Norway, and the Netherlands, both maintained relatively stable exports over the period examined.

Receiving outsized amounts of energy imports from a single source, even aside from political considerations, is fraught with risk. If anything occurs along the entire supply chain — from source to consumer — to disrupt the gas flow, it heralds a potential crisis that could not be sustained indefinitely. Add in the politically contentious relationship between the European Union and Russia (over a host of issues), and the energy supply situation has the potential to become a significant problem.

Sustained increases in gas imports from Russia should worry German politicians since it will reduce political operating space in the case of any future disagreements.

However, something else interesting does show up in the data: the significant and growing increase in natural gas imports over domestic consumption.

Beginning in 2009, a noticeable jump in natural gas imports compared to domestic consumption occurs, with the country importing 7 percent more gas than it consumed. Before this year, Germany roughly imports enough to cover the difference between consumption and production, as one would expect.

After 2009, trend of excessive imports is maintained, and then accelerates in 2013 with imports over 13 percent of what is required, and then 27 percent over in 2015.

The amount settles to 17 percent in 2016, meaning Germany is systematically importing more natural gas than is necessary for domestic consumption. This discrepancy appears to be due to its central location within Europe and its developed natural gas network, which seems to be taking on a redistribution role for European markets.

These exports represent a relatively new development that appears to be a sustained effort toward making Germany a European gas hub.

In the two critical areas outlined, Germany has had mixed results. The government has been able to slightly reduce energy consumption overall but hasn’t had much success in the reduction of fossil fuel use. However, the impressive gains in renewables consumption have allowed the country to wean itself off large amounts of nuclear power successfully.

Renewables generation is increasing, with more wind and solar power ultimately finding its way to consumers, whether through more effective distribution networks or storage. However, anyone that had hopes of diversification of natural gas supplies away from Russia will be sorely disappointed at the progress made so far, and by the current trajectory of Germany sourcing.

Quite the opposite, Russian gas exports will continue to grow, and form a larger part yet of the consumption mix.

Aside from the negatives, the growth in renewables and the parallel development of flexible power systems should be viewed as an investment in a more favorable, sustainable future energy mix — something very close to fruition.