Something doesn’t add up and it smells. If you read Fool me Twice you’ve probably sensed that I’m not all that convinced by the “there won’t be a recession” line of argument. 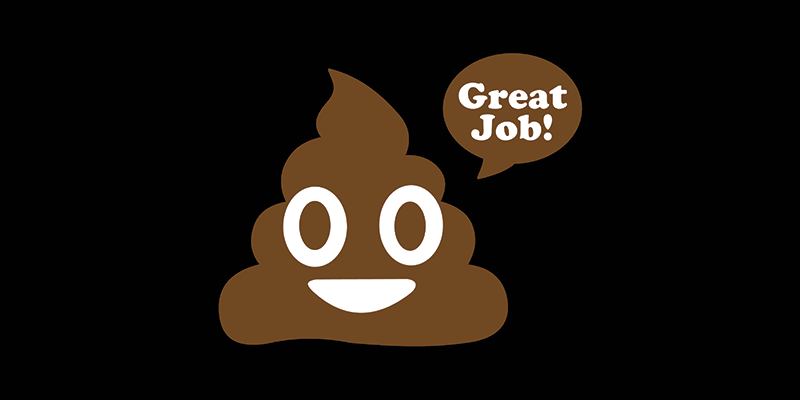 Yea we may experience some slowing, but overall things are solid and steady so the argument goes. But are they really?

For one the earnings outlook picture is deteriorating quickly (never mind the Fed induced vertical rally in stocks):

“As the fourth-quarter results roll in, the S&P 500 is poised to post an average earnings growth rate of 12.4 percent, the fifth straight quarter of double-digit growth. These results have boosted the stock market, with the S&P 500 enjoying its best January in more than 30 years.

While companies are reporting great numbers, their outlooks are falling short. And that’s caused analysts to rapidly slash their earnings expectations for the current quarter. In fact, Wall Street’s expectations for earnings growth for the first quarter of 2019 have just turned negative with profits expected to fall on average by 0.8 percent, according to FactSet. That would mark the first year-over-year decline in earnings since the second quarter of 2016″: 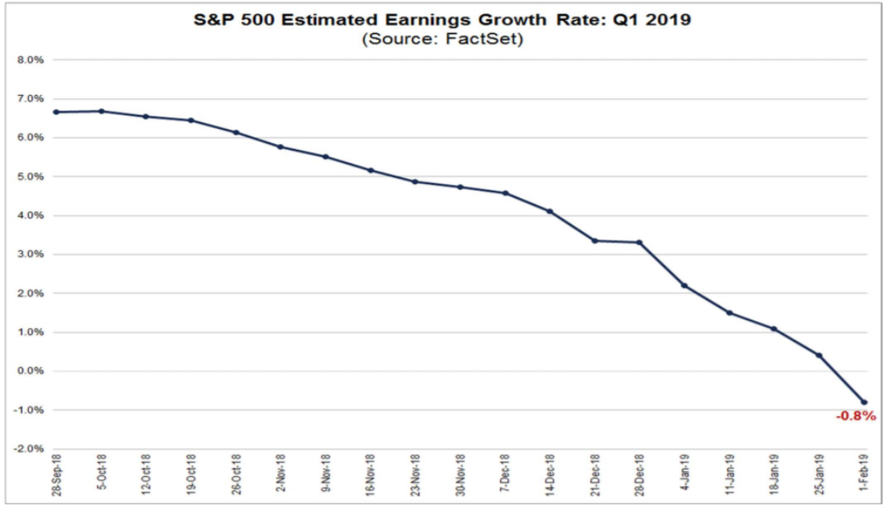 “Earnings are deteriorating even faster than we expected,” Morgan Stanley chief U.S. equity strategist Mike Wilson said in a note Monday. “The earnings revision breadth over the past month has been even more negative than we expected leading us to think are earnings recession trough in the U.S. could be later than 1Q and deeper.”

So negative growth with a view of a bounce back later in 2019. So we have slowing growth in the economy and negative earnings growth now in Q1 2019.

Now if 2018 was fantastic perhaps a temporary blip is not so bad so the current thinking goes. But was 2018 really so great?

Oh I know what you’re thinking. While tax receipt growth has declined for years it was exacerbated in 2018 by the tax cuts. And that argument may make sense if you look at what happened to corporate tax receipts. It just collapsed: 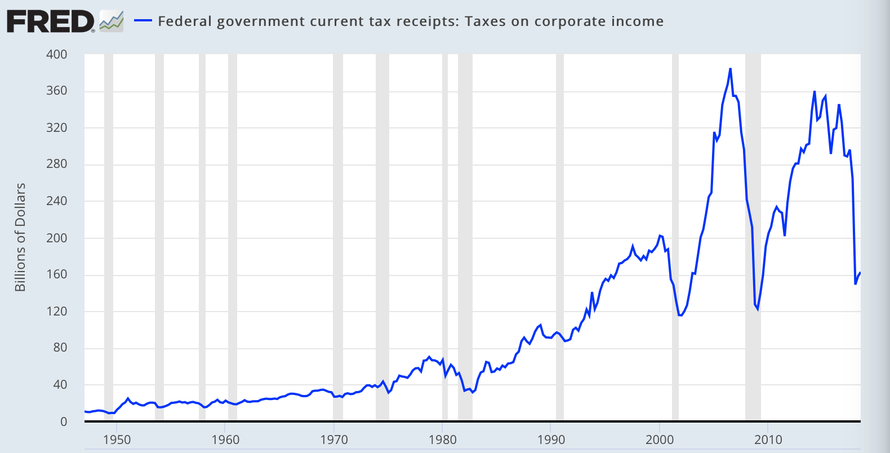 And hence its growth figures are abysmal:

Very much recessionary, but yea it’s due to tax cuts and hence profits for companies were just fantastic, but were they? 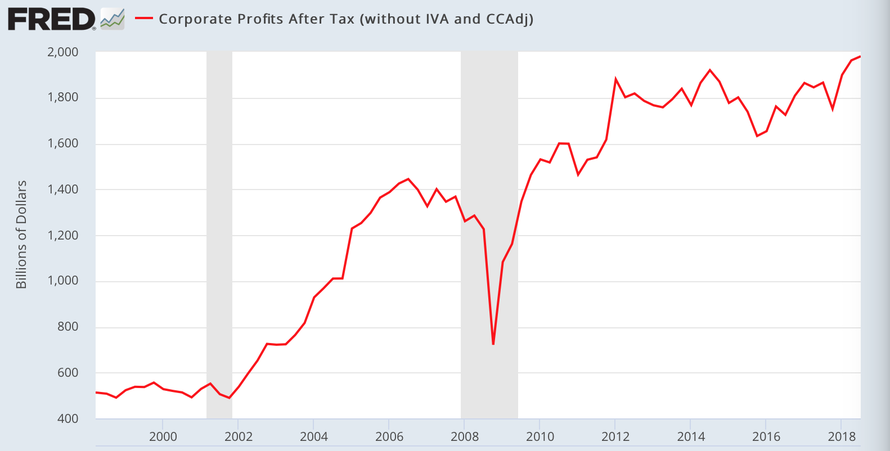 Yes they improved and showed record profits after tax, but notably they were just above the Q4 2014 levels, an improvement, but overall not a runaway picture especially considering that 2019 is now slowing down and stock prices are much higher compared to 2014.

But here’s the kicker: Take the tax advantage out of the equation and earnings before tax were actually less than in Q4 2014: 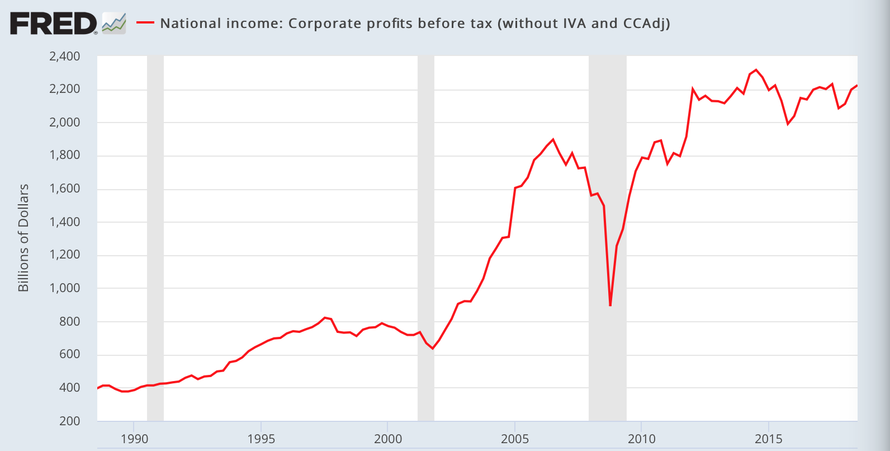 Maybe Q4 results will round that picture up and show us new highs, but generally it should be clear that the overall profit picture has really not done much in the past few years.

Which brings us back to the tax receipts. How has the consumer faired from all these tax cuts?

After all tax receipts are also regressive here:

What? No big salary increased that would show higher taxable incomes? But at least tax cuts went to consumers’ pocketbooks?

Not if you look at real disposable income, it has flat lined, doesn’t even show a blip for 2018: 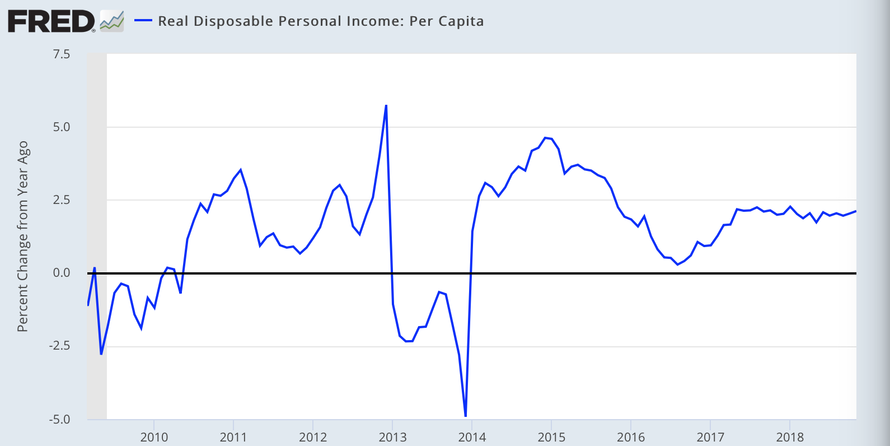 So we have slowing growth, regressive earnings in at least Q1 with estimates coming down hard and we have negative tax receipt growth and flat real disposable income. Oh, but we’ll have trillion dollar deficits to show for it all.

But there’s no risk of recession.

Got it. Great job everybody, but it smells. Just a little.