An unprecedented attack on free speech and the free press is afoot, as the U.S. Department of Justice (DOJ) charges Julian Assange with espionage over leaked documents published on WikiLeaks. This is “the first time in the history of our country [that] the government has brought criminal charges under the Espionage Act against a publisher for the publication of truthful information,” warns the American Civil Liberties Union.

Some have expressed a little schadenfreude to see Assange, an alleged Trump supporter, get screwed over by Trump’s administration. But as journalist Adam Serwer points out, this isn’t necessarily about Assange so much as “establishing a precedent that can be used to prosecute journalists for doing their jobs and publishing information that embarrasses the government or exposes wrongdoing.”

Joel Simon, executive director of the Committee to Protect Journalists, calls the prosecution a “threat to all journalists everywhere who publish information that governments would like to keep secret.”

Sen. Ron Wyden (D–Ore.) says he is “extremely concerned about the precedent this may set and potential dangers to the work of journalists and the First Amendment.”

The New York Times editorial board is aghast, saying the Assange prosecution “is aimed straight at the heart of the First Amendment.”

The authorities are attempting to justify this egregious abuse of power by declaring that “Assange is no journalist,” as DOJ National Security Chief John Demers put it yesterday. But receiving and disseminating information from a government whistleblower, as WikiLeaks did, is of course what many undeniably real journalists have done and exactly the kind of activity the First Amendment is there to protect.

The new 18-count indictment from a federal grand jury concerns classified documents Assange received in 2010 from Chelsea Manning, who was then an army intelligence analyst. The documents revealed damning details about U.S. military operations in Iraq and Afghanistan. Manning—who is currently being held in a federal detention center in Virginia because she is refusing to testify before a grand jury about Assange—says she continues “to accept full and sole responsibility for those disclosures.”

“It’s telling that the government appears to have already obtained this indictment before my contempt hearing last week,” Manning adds in her statement:

This administration describes the press as the opposition party and an enemy of the people. Today, they use the law as a sword.

The spy charges come in addition to the “hacking” charges against Assange that were revealed last month. Assange supposedly violated the Computer Fraud and Abuse Act by suggesting Manning try different passwords on government computers. “We should all be worried about such abuses of ‘hacking’ laws to crush ideological enemies,” Andrea O’Sullivan noted at the time.

Recently in @CJR I argued that the prosecution of leakers represents a much greater threat to #pressfreedom than Trump's angry rhetoric. The #Assange indictment drives this point home. https://t.co/ut1O5UeBNc

The latest indictment alleges that Assange conspired with Manning, “was complicit…in unlawfully obtaining and disclosing classified documents related to the national defense,” and “aided and abetted Manning in communicating classified documents.” These are all activities that journalists do regularly in the course of communicating with whistleblowers and other confidential sources. 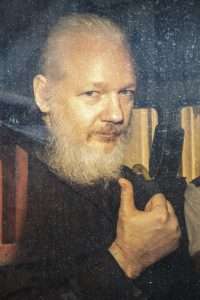 “Put simply, these unprecedented charges against Julian Assange and WikiLeaks are the most significant and terrifying threat to the First Amendment in the 21st century,” says Freedom of the Press Foundation co-founder Trevor Timm.

“As a practical matter, I suspect that very few reporters actively help their sources crack passwords (even just to hide the sources’ own tracks), just as very few reporters provide sources with lock picks or instructions on breaking into safes,” argues law professor Eugene Volokh. He can even see some merit in the theory that Assange solicited Manning to commit a crime. But “the most striking counts are counts 15-17, which allege, in relevant part:”

From in or about July 2010…, [Assange], having unauthorized possession of, access to, and control over documents relating to the national defense [such as leaked Afghanistan and Iraq war activity reports and State Department cables], willfully and unlawfully caused and attempted to cause such materials to be communicated, delivered, and transmitted to persons not entitled to receive them.

nothing in this count turns on Assange’s having helped or solicited Manning’s leaks. Rather, it relies simply on Assange having published…material that he knew was improperly leaked and was related to the national defense within the meaning of the statute. To convict on these counts, a jury wouldn’t have to find any complicity by Assange in the initial leak.

And reporters do routinely publish information that they know was illegally leaked by someone.

Oof. On Radio 3’s most recent Arts & Ideas podcast, author Naomi Wolf realizes she got a big thing wrong in her upcoming book on the criminalization of homosexuality:

Everyone listen to Naomi Wolf realize on live radio that the historical thesis of the book she's there to promote is based on her misunderstanding a legal term pic.twitter.com/a3tB77g3c1

This is far from the first time a major error can be found in Wolf’s writing:

This is nothing. In the 1990's she wrote a book claiming 150,000 American women were dying every year from anorexia. The real number is in the dozens.

The case involves Armslist, an online classified ads service for guns. A shooter, Haughton, bought a gun via Armslist from a private seller, which bypassed any legally required background checks. The shooter was subject to a restraining order that prohibited him from owning guns. He used the Armslist-acquired gun to kill four people, including himself and the person protected by the restraining order, and injure four others.

The estate sued Armslist for negligence and more. Everyone agrees that the gun seller created the ad in question. The plaintiff argued that Armslist partially developed the ad….Armslist defended on Section 230 grounds. The circuit court agreed with Armslist. The appeals court reversed. The Supreme Court ruled for Armslist in a straightforward, but highly defense-favorable, opinion.

In its decision, the court explicitly states that “whether or not Armslist knew illegal content was being posted on its site, it did not materially contribute to the content’s illegality,” and that’s what matters.

Goldman comments that “this case adds to the growing precedent that plaintiffs can’t get around [Section 230 protections] by alleging defective website design. The First Circuit and Second Circuit emphatically rejected such workarounds in the Doe v. Backpage and Herrick v. Grindr rulings, respectively. This court extends that jurisprudence.”

Mueller’s report describes a consistent effort by the president to use his office to obstruct or otherwise corruptly impede the Russian election interference investigation because it put his interests at risk.

I wrote about one of the roots of the "End Demand" narrative – a fear of cross-racial mixing https://t.co/BxhL7yP0Z4

from Latest – Reason.com http://bit.ly/2wk4xnr
via IFTTT