What are the Democratic candidates saying about each other after last night’s debate? Their responses reveal substantive policy differences while also featuring a high degree of bloviation and whining.

Some of the most contentious debate moments were between Gabbard—an army veteran and staunch opponent of overly interventionist policy—and Ryan, who weirdly chose to use one of the rare times he was called on to take us back to the George W. Bush years and suggest that folks from Afghanistan did 9/11.

“When we weren’t there they were flying planes into our buildings,” Ryan said—though no Afghans were among the attackers—as a reason why, after 18 years, we still need to stay the course in Afghanistan. Here’s Gabbard’s response:

After the debate, Ryan—a virtual unknown, even among many residents of his home state—complained that Gabbard “was trying to make it look like I didn’t understand what I’m talking about” because she told him that the Taliban did not, in fact, do 9/11. He told reporters: “I personally don’t need to be lectured by somebody who’s dining with a dictator who gassed kids. I know what I’m talking about. I’m right, and we can’t let these areas be wide open.”

A post-debate statement from the Ryan campaign complained further that Gabbard had “contorted” his point “about the Taliban being complicit in the 9/11 attacks” and said that Ryan rejects “Gabbard’s isolationism.”

The exchange seems to have worked out well for Gabbard, who—like Ryan—is not well known on the national stage. Ahead of the debate, the only state where she led Google searches was in her native Hawaii; afterward, she dominated Google searches across the U.S. Ryan, for his part, saw no such search surge post-debate. 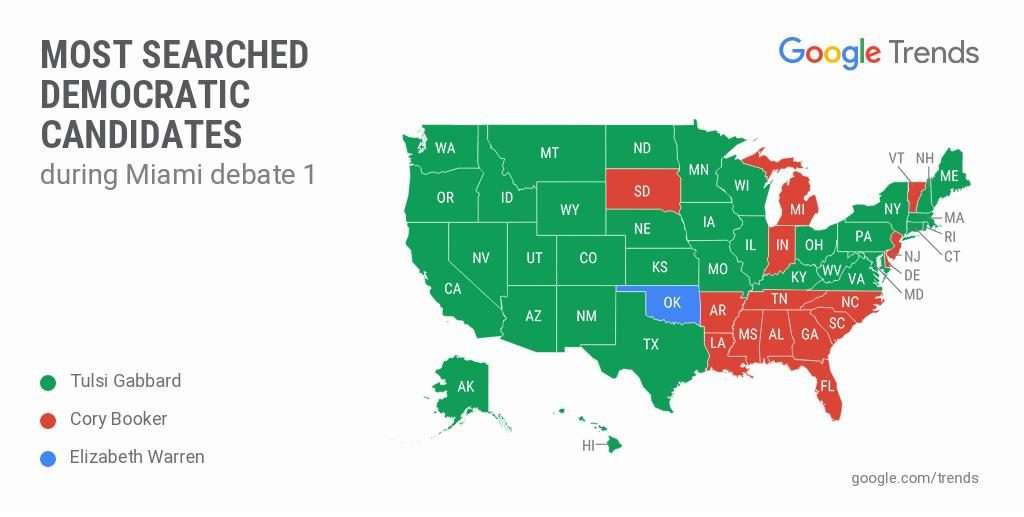 Booker and Warren were also among top the Google searches, both before and after last night’s debate, and both have received good report cards from pundits. Both also received a backhanded compliment from Castro, who commented: “I find it very ironic that a senator from Massachusetts and a senator from New Jersey are the ones who understand this border policy and this law better than Congressman O’Rourke.”

O’Rourke also received some shade from de Blasio (who seemed by far the most shouty and red-faced candidate on stage last night), who in between rambling about his black son and the glory of the NYPD tried to position himself as The True Progressive and slammed O’Rourke for not supporting the total elimination of all private health insurance. (Yes, that’s where the Dems are now, folks.) Afterward, de Blasio told reporters that some of the candidates he had shared the stage with do not “fit the values of the party.”

Inslee also slammed opponents for supposedly failing to have “advanced the ball” on socializing health care as much as he has.

Meanwhile, Klobuchar—who neither made any major gaffes last night nor stood out in the slightest with her cheerful Midwestern moderate schtick—had her biggest moment of the debate after Inslee suggested he was the most notable champion of reproductive freedom. Klobuchar objected to that on the grounds that she, Gabbard, and Warren were women and had also worked to defend “a woman’s right to choose.” But Klobuchar offered no further details about what she had done on that front, imploring voters to just believe she’s better here by virtue of Inslee being a man.

The prosecution of Backpage execs is really a war on sex workers. A new Reason TV documentary looks at the lives of Backpage.com founders Michael Lacey and James Larkin, what the site they started meant to sex workers, and the lengths the government is going to to shut both down:

“This debate was the best argument for President Trump’s re-election and should really be counted as an in-kind contribution to the president’s campaign." — Trump campaign press secretary @kayleighmcenany

from Latest – Reason.com https://ift.tt/2X8Gw2C
via IFTTT