Skip to content
We’re keeping this simple, I had nothing to do with that atrocity that happened on BTFDtv New Years Eve into New Years morning.  In fact, I’ve cut my connections to the network because of it.  If I return, it will be only because of a massive alteration in the power structure and ability of single people to make reputation damaging decisions.

I was appalled to wake up this morning and see what one man has done to BTFDtv in one night.  As many of you understand, it takes a very strong will to fend of the wave of egotism that can manifest itself in click-rates and page views.  I assure you, I fully expected a legit conversation to broadcasted to our faithful viewers who stuck around through the blackouts, shitty video/audio, and other problems, and not this: 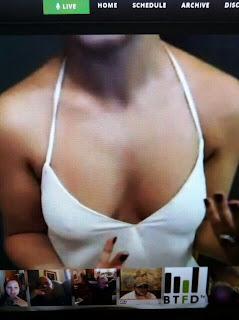 This isn’t about the top layer sex bullshit either, this about a product we’ve created and I’ve worked very hard to produce with the help and assistance of many gifted folks.  We’ve all helped each other build this network.  However, I will not allow those who trust me and the Calibrated Confidence brand to perceive me as affiliated in any of this low-brow titillating financial bullshit post The Wolf of Wall Street porno.  If you were as disgusted as I was at what happened, make sure to let the “benevolent dictator” knows your thoughts.  The problem has become now that instead of focusing on what you all want from BTFDtv, those in control have fallen to devilish motives attached to over-valuation on click-rate relevance.  Credibility goes much farther than statistics on a website.  Greed blinds people and causes them to view their audience as a revenue source and not a relationship.
I’m beyond disappointed in those I thought I could trust and extremely thankful to them for the sharp reminder of that I need to keep a more keen eye on those “close” to me.  What really pissed me off is that for 100 fucking views in BTFDtv’s precious click-bait box, we could have had the video I did with @Not_Jim_Cramer on ZeroHedge but we didn’t because some of the mob reached out to me concerned about what was happening with this Skirt bullshit.  So understand that BTFDtv has caused a broad audience similar to yourselves to miss out on the knowledge of what was discussed in that video (which I embedded below).

So who’s ready to explain to me what @BTFDtv is and if/why finance people should watch it?
— DumbLuckCapital (@DumbLuckCapital) January 1, 2014

The @talktoskirt appearance on @BTFDtv last night confirms twitter is full of classless men. Step your game up gentleman. U know who u are.
— Trader of Things (@ZachShackleford) January 1, 2014

Really sorry I missed the @talktoskirt segment on @btfdtv last night. Half my timeline talking about it, hope there’s a rerun.

I apologize to those of you who relied on BTFDtv for content and trusted me to always affiliate with those who had you guys in the forefronts of their minds.  Calibrated Confidence as a brand has learned a great deal from the first day of 2014.  Stay tuned here as I’ll stream in Special Reserve 200 Proof and hook you guys up with a tab at the top of this site.
Calibrated Confidence Interview @Not_Jim_Cramer

Skip the blathering and go to 7:06 for the interview

Again, I had no say or anything to do with what you saw on New Years Eve, this is the type of content Calibrated Confidence produces.