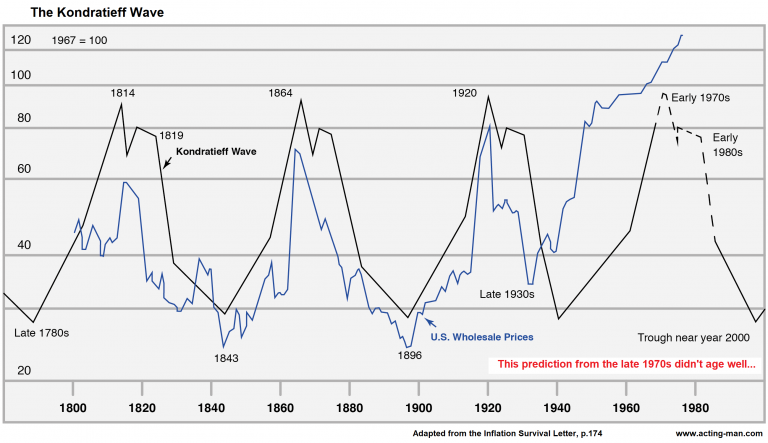 For a long time people believed – and from what we read and hear, many still do – that economic cycles move in easily predictable, regular time periods. All you had to do was create a chart of the up and down waves of your favorite cycle model and extrapolate it into the future, and presto, your prediction was ready to be sold. But it turns out it is not that simple. The chart above was published by the “Inflation Survival Letter” in the late 1970s and purported to show the future trend of the so-called Kondratiev Wave, a cycle invented by Soviet economist Nikolai Kondratiev (who was eventually deported to the GULAG and killed by the Stalin regime, after a fellow American economics professor denounced him to the communists in Moscow as a “counter-revolutionary”). Interestingly, their forecast of the trend in wholesale prices turned out to be correct, but everything else they predicted in this context was incorrect. According to the K-Wave theory, the year 2000 was supposed to have been the trough of a major economic depression, with extremely high unemployment, a plunging stock market and all the other symptoms associated with a giant bust. In reality, the year 2000 was the peak of a major boom, with unemployment almost reaching a record low and stock prices soaring to unprecedented valuations. There was a time when the seeming elegance and simplicity of models like Kondratiev’s had our attention as well. There are ways of rationalizing such models. For instance, one could argue that it takes a few generations to “forget the lessons of a depression” and end the risk aversion and penchant for saving it inculcates in the public. There are certainly kernels of truth in this, but the fact remains that the future is unknowable. Kondratiev e.g. didn’t know that the communist empire would crumble in 1990 and that half the world would join the hampered market economy of the nominally capitalist West. This was undoubtedly one of the factors helping to extend the economic boom well into the 1990s (precisely because it kept prices low, which in turn enabled central banks to implement loose monetary policies). [PT]

The economy, like financial markets, ebb and flow in rhythmic cycles; though, they never quite repeat with perfection. A shortage of wheat one year should compel production and an abundant harvest the next year.  You can darn near count on it, so long as there’s not a late season frost, a mite infestation, or some other act of God that wipes out the crop yield.

Indeed, the economy is dynamic.  It expands.  It contracts.  But it does more than that.  For it is more biotic than abiotic. It changes. It evolves. It continuously reshapes and readjusts to the countless and ever changing inputs, innovations, and interactions of the people and resources that compose it.

The economy also adjusts to government intervention and the conceit of central planners.  An economy with a soft government touch is lively, energetic, and innovative.  Conversely, a heavy handed government calibrates an economy to be slow moving, lethargic, and predictable.

In addition to government, the economy mirrors the veracity of the money and the range of credit that flows through it.  An economy with sound money and tight credit is industrious, thrifty, and honest.  Whereas an economy with fake money and cheap credit is slothful, gluttonous, and deceitful.

Gluttony – one of the seven deadly sins. Fiat money that can be arbitrarily created from thin air will indeed undermine a society’s morals.  [PT]

Preparing for an Alien Invasion

Over time attitudes towards government and credit change too.  One generation borrows money and spends it, while voting in an endless array of social welfare programs.  The next saves and pays down debt, and is suspicious of the snake oil promises of politicians.

No graphical curve can precisely predict what way people’s behaviors and attitudes will swing from one period to the next.  Nor can it predict the implications of a new technological advancement or other unforeseen developments that transform the world.

Still, this doesn’t stop a congregation of academic economists from explaining the economy like they’re explaining how to calculate the area of a circle.  Some even win the Nobel Prize for their adventures into nonsense.  Armed with pie graphs, aggregate statistics, and dot plot charts, they offer theories of how the great big economic machine works.  What’s more, they propose and execute programs to improve their graphs and charts.

Paul Krugman calls for a faked alien invasion to get the government to spend even more money it doesn’t have. This is based on the erroneous idea that “World War II ended the depression”, i.e. that the depression was ended by a version of war communism. The US economy was essentially transformed into a command economy during the war – GDP certainly soared, and yet, there was rationing of even the most basic consumer goods, never mind “luxury items” such as cars! In reality it was the fact that Congress repealed large swathes of Roosevelt’s “New Deal” in 1946 that got the economy back on its feet. The erroneous notion that “war is good for the economy” is highly popular with economic illiterates who fail to grasp the principles explained in Bastiat’s  famous fable of the broken window – and despite having won the Sverige Riskbank’s wannabe “Nobel Prize” for Economics for being a faithful statist, Krugman is one of them. [PT]

In fact, several years ago, Krugman, a devotee of Keynes, drifted so far out of orbit that his thoughts literally took him to the outer limits of deep space.  Following this righteous departure, Krugman went on cable television and explained that the proper way to propel an economic growth chart up and to the right is to borrow massive amounts of money and spend it preparing for an alien invasion.

Washington’s Latest Match Made In Hell

The recent mid-term election demonstrates that the American populace wants the more abundant life to be given to them via the highly visible hand of big government.  For example, 29 year old Alexandria Ocasio-Cortez was recently elected to the House of Representatives from New York’s 14th district.

Ocasio-Cortez is a socialist, and she’s determined to give the voters exactly what they’ve asked for.  Free school.  Free drugs.  Free retirement.  And a guaranteed income for showing up to pretend jobs that are little more than adult daycare – like many of those jobs currently on furlough.

One possible solution to satisfy the will of the people came this week from Ocasio-Cortez.  It involves jacking the marginal tax rate on top earners up to 70 percent.  The spoils would then be frittered away on a massive boondoggle, a “Green New Deal,” to save the planet from the menace of climate change.

Alexandria Ocasio-Cortez – the Sarah Palin of the American Left. For some reason this mathematically and economically challenged socialist is now in Congress and has become a “hero” of far-left Democrats. Go figure. [PT]

Several days later Paul Krugman, in an article titled The Economics of Soaking the Rich, validated Ocasio-Cortez’s proposal.  According to Krugman:

“Tax policy toward the rich should have nothing to do with the interests of the rich, per se, but should only be concerned with how incentive effects change the behavior of the rich, and how this affects the rest of the population.

“Or to put it a bit more succinctly, when taxing the rich, all we should care about is how much revenue we raise.  The optimal tax rate on people with very high incomes is the rate that raises the maximum possible revenue.”

Krugman even mentioned several of his cohort’s academic research that had pinpointed the optimal tax rate on high earners to be 73 percent or even more than 80 percent. 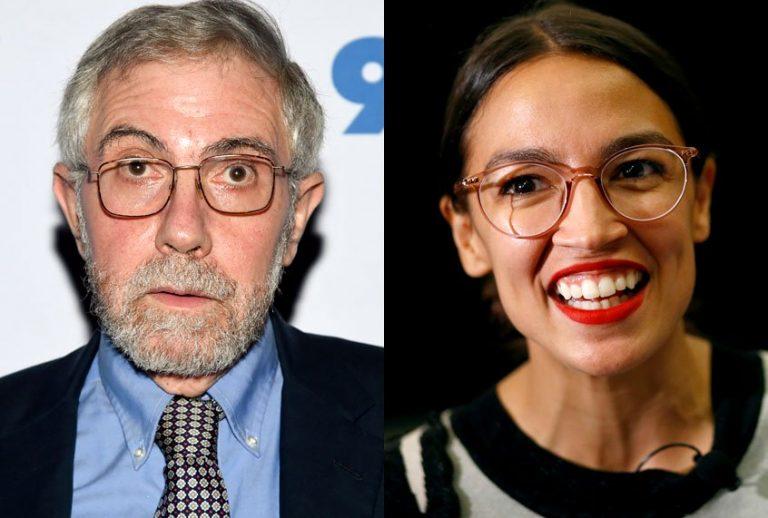 Is anyone surprised that Paul Krugman actually supports her harebrained ideas? The photograph above appeared in a Salon editorial entitled (we kid you not) “Paul Krugman shuts down right-wing attacks on Rep. Alexandria Ocasio-Cortez”. Sorry fantasists at Salon – he didn’t “shut down” anything, he merely proved beyond reasonable doubt that he really is economically illiterate. Does the US actually want to become a sclerotic centrally planned economy with minimal if any growth, forever teetering on the brink of collapse like that of Europe? In fact, the proposals by Ms. Ocasio-Cortez would make the situation in the US far worse than in most of Europe. Not to mention that her “Green Deal” is downright nutty, and that is putting it as mildly and politely as possible. [PT]

Nonetheless, Ocasio-Cortez and Krugman are a match made in hell.  Should a Green New Deal, funded by a top tax rate of 70 percent be put into practice, we presume it would have a far different result than Krugman advises.  Remember, the economy, and the people that compose it, adjusts and re-calibrates to the level of central planning and government intervention imposed upon it.

Hence, the promised nirvana of everyone getting rich selling rooftop solar power back to their utility at the expense of their neighbors will turn out to be a great big dud.  Maximum possible revenue will diminish.  In its place will be an enormous pile of debts and an even greater pile of regrets.