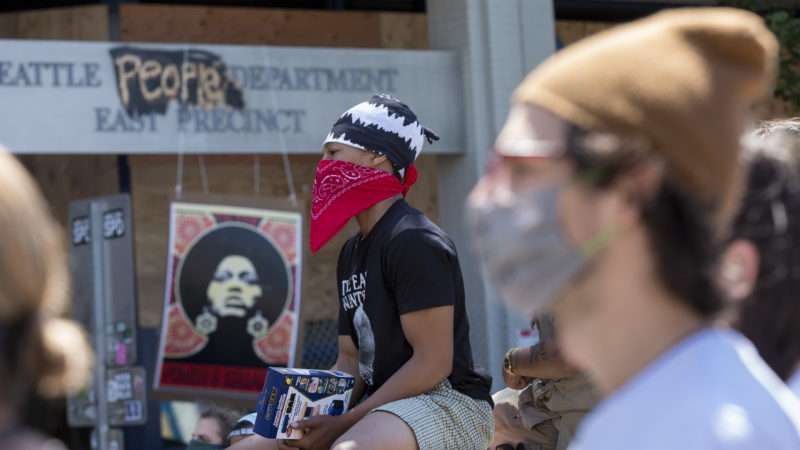 Seattle Mayor Jenny Durkan is putting a halt to the city’s autonomous zone, an area recently claimed by protesters as a police-free sanctuary within the city. Since it was set up on June 8, the six-block area—alternately referred to as the Capitol Hill Autonomous Zone (CHAZ) or the Capitol Hill Organized Protest (CHOP)—went from a “block party atmosphere” to seeing 19-year-old Lorenzo Anderson fatally shot within its borders and two others injured in shootings there. “It’s time for people to go home,” Durkan said on Monday.

Durkan declined to say what city authorities planned to do if people refused their polite requests.

Meanwhile, in Washington, D.C., protesters attempted to tear down a statue of Andrew Johnson that sits in Lafayette Square, a park in front of the White House. After being confronted by police, they declared an area in front of a church there the “Black House Autonomous Zone” (though this appears to be largely symbolic).

After trying to pull down a statue of Andrew Jackson, protesters outside the White House have set up the “Black House Autonomous Zone” pic.twitter.com/bQPAX144ik

Seattle repealed a law against “loitering” for the purpose of prostitution. The Seattle City Council voted unanimously on Monday to repeal the law, after Councilmembers Alex Pedersen (District 4), Tammy J. Morales (District 2), and Andrew J. Lewis (District 7) requested it be repealed, following a 2018 recommendation from a working group on reentry problems faced by people exiting incarceration. “The prostitution loitering ordinance has a discriminatory legacy that impacted primarily people of color, women and our LGBTQ community,” said Lewis in a statement. “I’ve received hundreds of emails from constituents almost uniformly in favor of repealing these ordinances.”

Pennsylvania requires licensed cosmetologists to prove they have “good moral character.” The state has rejected qualified applicants for having any criminal record, no matter what the charges were, the circumstances behind it, or how long ago the offense happened, reports NBC News. And “the moral character provision of Pennsylvania’s cosmetology law is one of tens of thousands of regulations used by states and local governments that make it harder for people with criminal records to find work,” notes NBC’s Tyler Kingkade. “These rules affect about 1 in 3 American adults who have a criminal record and can increase recidivism, the U.S. Commission on Civil Rights concluded in a report last year.”

Among Trump voters, the economy, his stances on China and immigration, and his judicial appointments are all considered strong reasons to back him.

A) It all comes down to Wednesday and Thursday in the Senate and House this week with police reform.

The House and Senate have prepped dueling legislative proposals to curb police abuse. The House will debate and vote on its bill Thursday.

So those cops didn’t just imagine a nonexistent “crime”, they investigated this imaginary crime lengthily and thoroughly, and naturally, at a fair amount of taxpayer expense. Plenty of room with some budget cuts here. https://t.co/YCtzmqS55t

New: ProPublica Deputy Managing Editor Eric Umansky’s family saw an unmarked NYPD cruiser hit a Black teenager. He tried to find out how it happened, and instead found all of the ways the NYPD is shielded from accountability. https://t.co/xXWo9pzlcd

from Latest – Reason.com https://ift.tt/3fQNvlQ
via IFTTT